From Infogalactic: the planetary knowledge core
Jump to: navigation, search
"࿊" redirects here. For other uses, see Yin and yang.

The Tibetan alphabet is an abugida of Indic origin used to write the Tibetan language as well as Dzongkha, the Sikkimese language, Ladakhi, and sometimes Balti. The printed form of the alphabet is called uchen script (Tibetan: དབུ་ཅན་, Wylie: dbu-can; "with a head") while the hand-written cursive form used in everyday writing is called umê script (Tibetan: དབུ་མེད་, Wylie: dbu-med; "headless").

The alphabet is very closely linked to a broad ethnic Tibetan identity, spanning across areas in China, Bhutan, India, Nepal, and Pakistan.[1] The Tibetan alphabet is ancestral to the Limbu alphabet, the Lepcha alphabet,[2] and the multilingual 'Phags-pa script.[2]

The Tibetan alphabet is romanized in a variety of ways.[3] This article employs the Wylie transliteration system.

The creation of the Tibetan alphabet is attributed to Thonmi Sambhota of the mid-7th century. Tradition holds that Thonmi Sambhota, a minister of Songtsen Gampo (569-649), was sent to India to study the art of writing, and upon his return introduced the alphabet. The form of the letters is based on an Indic alphabet of that period.[4]

Three orthographic standardizations were developed. The most important, an official orthography aimed to facilitate the translation of Buddhist scriptures, emerged during the early 9th century. Standard orthography has not altered since then, while the spoken language has changed by, for example, losing complex consonant clusters. As a result, in all modern Tibetan dialects, in particular in the Standard Tibetan of Lhasa, there is a great divergence between current spelling (which still reflects the 9th-century spoken Tibetan) and current pronunciation. This divergence is the basis of an argument in favour of spelling reform, to write Tibetan as it is pronounced, for example, writing Kagyu instead of Bka'-rgyud. In contrast, the pronunciation of the Balti, Ladakhi and Burig languages adheres more closely to the archaic spelling.

The Tibetan alphabet has thirty basic letters, sometimes known as "radicals", for consonants.[2] A description of the actual pronunciation of individual letters in Standard Tibetan precedes a chart showing the traditional romanisation of Classical Tibetan. 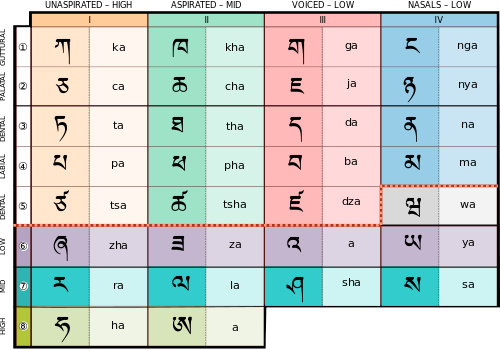 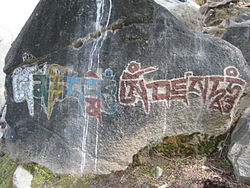 To understand how this works, one can look at the radical "ka" and see what happens when it becomes "kra" or "rka". In both cases, the symbol for "ka" is used, but when the r is in the middle of the consonant and vowel, it is added as a subscript. On the other hand, when the r comes before the consonant and vowel, it is added as a superscript.[2] R actually changes form when it is above most other consonants; thus རྐ rka. However, an exception to this is the cluster རྙ rnya. Similarly, the consonants w, r, and y change form when they are beneath other consonants; thus ཀྭ kwa; ཀྲ kra; ཀྱ kya.

The vowels used in the alphabet are a, i, u, e, and o. While the vowel a is included in each consonant or radical, the other vowels are indicated by marks; thus ཀ ka, ཀི ki, ཀུ ku, ཀེ ke, ཀོ ko. The vowels i, e, and o are placed above consonants as diacritics, while the vowel u is placed underneath consonants.[2] Old Tibetan included a gigu 'verso' of uncertain meaning. There is no distinction between long and short vowels in written Tibetan, except in loanwords, especially transcribed from the Sanskrit.

In the Tibetan script, the syllables are written from left to right.[9] Syllables are separated by a tseg (་); since many Tibetan words are monosyllabic, this mark often functions almost as a space. Spaces are not used to divide words.

Although some Tibetan dialects are tonal, the language had no tone at the time of the script's invention, and there are no dedicated symbols for tone. However, since tones developed from segmental features they can usually be correctly predicted by the archaic spelling of Tibetan words.

As in other Indic scripts, clustered consonants are often stacked vertically. Unfortunately, some fonts and applications do not support this behavior for Tibetan, so these examples may not display properly; you might have to download a font such as Tibetan Machine Uni. 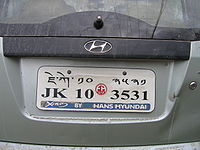 The number plate of a car registered in Jammu and Kashmir, in Roman and Tibetan scripts.

Tibetan was originally one of the scripts in the first version of the Unicode Standard in 1991, in the Unicode block U+1000–U+104F. However, in 1993, in version 1.1, it was removed (the code points it took up would later be used for the Burmese script in version 3.0). The Tibetan script was re-added in July, 1996 with the release of version 2.0.

The Unicode block for Tibetan is U+0F00–U+0FFF. It includes letters, digits and various punctuation marks and special symbols used in religious texts:

Several competing transliteration and transcription systems have been devised for the Tibetan script. The most widely used one is the Wylie transliteration; others include the Library of Congress system and the IPA-based transliteration (Jacques 2012).

The first version of Microsoft Windows to support the Tibetan keyboard layout is MS Windows Vista. The layout has been available in Linux since September 2007. In Ubuntu 12.04, one can install Tibetan language support through Dash / Language Support / Install/Remove Languages, the input method can be turned on from Dash / Keyboard Layout, adding Tibetan keyboard layout. The layout applies the similar layout as in Microsoft Windows.