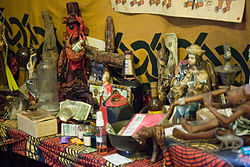 Example of Louisiana-Tradition Voodoo altar inside a temple in New Orleans.

Afro-American religions (also known as African diasporic religions or New World traditions) are a number of related religions that developed in the Americas in various nations of Latin America, the Caribbean, and the southern United States. They derive from African traditional religions (of West and Central Africa), Indigenous American, and European traditions and beliefs.

Afro-American religions involve ancestor veneration, and include a supreme creator along with a pantheon of divine spirits, such as the Orisha, Loa, Nkisi, and Alusi, among others. In addition to the syncretism of these various African traditions, many New World religions incorporate elements of Indigenous American, European, Kardecist, Spiritualist, Christian, Islamic, Judaic, Hindu, and Buddhist traditions.

Other closely related regional faiths include: