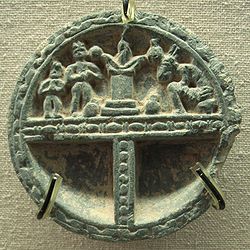 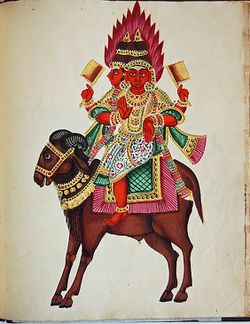 Agni the Hindu deity of fire, has a very prominent place among Rigvedic deities.

Worship or deification of fire (also pyrodulia, pyrolatry or pyrolatria) is known from various religions. Fire has been an important part of human culture since the Lower Paleolithic. The earliest known traces of controlled fire were found at Gesher Benot Ya‘aqov, Israel and dated to an age of 790,000 years,[1] and religious or animist notions connected to fire must be assumed to reach back to such early pre-Homo sapiens times.

Archaeologically, the earliest evidence for Indo-Iranian fire worship is found at the transition from the Sintashta-Petrovka to the Fedorovo culture around 1500 BC, together with first evidence of cremation. While cremation became ubiquitous in Hinduism, it came to be disavowed in Zoroastrianism. However, even earlier evidences of vedic fire altars have been found at the Indus Valley sites of Kalibangan and Lothal, giving rise to speculations towards earlier assumed the geographical location of the early Indo-Iranians.

Although the term "fire-worshippers" is primarily associated with Zoroastrians, the idea that Zoroastrians worship fire is originally from anti-Zoroastrian polemic. Instead, fire — even in a Fire temple (the Zoroastrian terms are more prosaic and simply mean "house of fire") — is considered to be an agent of purity and as a symbol of righteousness and truth. In the present day this is explained to be because fire burns ever-upwards and cannot itself be polluted. Nonetheless, Sadeh and Chaharshanbe Suri are both fire-related festivals celebrated throughout Greater Iran and date back to when Zoroastrianism was still the predominant religion of the region.

In Vedic disciplines of Hinduism, fire is a central element in the Yajna ceremony, with Agni, "fire", playing the role as mediator between the worshipper and the other gods. Related concepts are the Agnihotra ritual, the invocation of the healing properties of fire; the Agnicayana ritual, which is the building of a fire altar to Agni; and Agnistoma, which is one of the seven Somayajnas. In the Vaishnav branch of Hinduism, Agni or Fire is considered the tongue of the Supreme Lord Narayana, hence all the sacrifices done even to any demigod ultimately is a sacrifice to the Supreme Lord Narayana.[3]

Fire worship in Graeco-Roman tradition had two separate forms: fire of the hearth and fire of the forge. Hearth worship was maintained in Rome by the Vestal Virgins, who served the goddess Vesta, protector of the home, who had a sacred flame as the symbol of her presence in the city (cf. Sacred fire of Vesta). The Greek equivalent of the goddess was Hestia, whose worship is less well attested. The fire of the forge was associated with the Greek god Hephaestus and the Roman equivalent Vulcan. These two seem to have served both as craft-guild patrons and as protectors against accidental fires in cities. Also associated with fire is the titanic god Prometheus, who stole fire for humans from the gods. Most forms of worship in Graeco-Roman religion involved either cooking or burning completely an animal on a fire made on an altar in front of a temple (see hecatomb).

Celtic mythology had Belenus, whose name, "shining one", associated him with fire.

In Slavic mythology, Svarog, meaning "bright and clear", was the spirit of fire. The best known and dramatic among numerous Slavic Pagan fire rituals is the jumping over the bonfire on the Ivan Kupala Day.

Fire is an element of theophany in the Hebrew Bible's burning bush, pillar of fire, and the flame of the Menorah. The highest form of sacrifice was the Korban Olah, performed twice-daily, which is an animal sacrifice completely consumed by fire.

Fire continues to be a part of many human religions and cultures. For example, it is used in cremation and bonfires; candles are used in various religious ceremonies; eternal flames are used to remind of notable occasions; and the Olympic Flame burns for the duration of the games.

The Holy Fire in the Church of the Holy Sepulchre in Jerusalem has been consecutively documented since 1106 AD.[4]