The Battle of Domokos (Turkish: Dömeke savaşı) was a battle between the Ottoman Empire and Greece . This battle was a part of the Greco-Turkish War (1897).

The commander of the Ottoman army at Elassona (Turkish: Alasonya) was Ethem Pasha (later gained the title Gazi) . He was one of the younger generals of the Ottoman Army (then 46) and his appointment perplexed many.[1] The commander of the Greek army was the Prince Constantine. The Ottoman army in Domokos was 45000 strong and the Greek army was 40000 strong [2] The Greek side also had 2000 Italian irregulars under the command of Ricciotti Garibaldi.

According to a contemporary source following initial victories, Ethem Pasha had some of his troops in Velestino (which was the theatre of two former battles) and most in Pharsala. But there was a momentary pause after the second battle of Valestino. The new Greek prime minister Dimitrios Rallis was anxious to accept the mediation which the Great Powers were willing to undertake. [3] Failing to reach a compromise, Ethem Pasha marched from Phasla to the town of Domokos (Dömeke) on 17 May 1897. Domakos was the stronghold of the Greek army against the advancing Ottoman army. 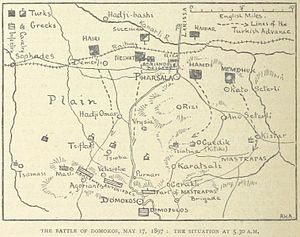 The first shots were fired at around 10 am on the left of the Greek lines, when Hairi Pasha's forces encountered a small force of Greek cavalry in the village of Tsioba. Hairi Pasha overestimated the Greek force and advanced cautiously; it took his troops an hour to take the village. Netshat's troops were delayed as well, as they had orders not to advance forward of Hairi's troops.[5]:251-252 Hamdi also encountered Greek troops around 10 am.[4]:188

The Turkish left wing under Hamdi and Memduk advanced slowly, hampered by the difficult ground and the resistance put up by the Greek troops under Colonel Mastrapas. The Greek Fourth Division held Hamdi's Albanian regulars back for some time before Hamdi forced his way forward with artillery. Memduk's forces faced similar difficulties against the Euzonoi defending against his advance.[5]:254-255

By 3 pm the Greeks had withdrawn from the plains in front of Domlokos, and Netshat's artillery had begun shelling the Greek lines. The Turkish infantry from Netshat and Hairi's divisions pressed forward under Greek artillery fire, reaching positions 400-600 yards from the Greek trenches.[5]:256[4]:189 At sunset, the artillery fire died down, and the Greek positions seemed intact.[5]:258

At 11 pm Ethem Pasha received word from Hamdi. Hamdi and Memduk were in position on the Greek right, ready to attack the right or right rear of the Greek positions. Ethem gave orders for Hamdi to attack the Greek right the next day, while Memduk swung around to cut off the Greek line of retreat through the Phurka Pass.[5]:260 Prince Constantine realized the danger posed by the Turkish forces on their right, and retreated during the night, leaving their fires burning to keep the Turks from noticing the retreat.[4]:190-191

Ethem took the initiative and advanced to Thermopylae about 40 kilometres (25 mi) south. Although the pass was heavily defended by the Greek army it was captured. The sadrazam (prime minister) Halil Rifat Pasha was planning to capture Athens (to be used a bargaining chip in the future negotiations). But the Great powers of Europe forced the Ottoman porte for armistice. Two days after the battle both sides ceased fire.