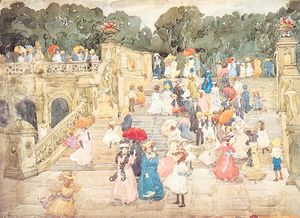 Bethesda Terrace stairs at the end of The Mall, watercolor by Maurice Prendergast, 1901

The Central Park Mall is a mall in Central Park, in Manhattan, New York City. The mall, leading to Bethesda Fountain, provides the only purely formal feature in the naturalistic original plan of Frederick Law Olmsted and Calvert Vaux for Central Park.

The Mall was designed so that a carriage could disgorge its passengers at the south end, then drive round and pick them up again overlooking Bethesda Terrace, whose view of the Lake and Ramble formed the "ultimatum of interest" in Olmsted and Vaux's vision. With no need for tiresome redoubling their steps, fashionable New Yorkers, who in the first decades of the Park's existence drove through it in their stylish equipages but rarely walked in it, had their chance to mingle with the less affluent, a mix that was considered thoroughly "American", and picturesque enough to be illustrated repeatedly in the turn-of-the-twentieth-century watercolors of Maurice Prendergast (illustrations) and, slightly later, of Ludwig Bemelmans: "'a great charm of Central Park' wrote J. Crawford Hamilton in Munsey's Magazine, 'is the marvellous variety of its scenery and embellishments' including the crowds".[1]

Facing onto the Mall near its upper end is the neo-classical half-domed Naumburg Bandshell (designed by William G. Tachau in 1916, built 1921-23),[2] The Naumburg Bandshell replaced Vaux's cast-iron and wooden construction of 1860, where nineteenth-century concerts evolved partly into open-air popular dances as the evenings fell. The bandstand fell into disrepair by 1912, and new designs were invited by the Parks Department at that time. The architectural firm of Carrère and Hastings made the first submission, but the proposal was rejected as blocking views west towards Sheep Meadow. [3] Then the successful Naumburg Bandshell design of W. G. Tachau's was submitted for its location on the east side of the Concert Ground, centrally nestled between the two projecting scenic overlooks, and it was accepted. It is Central Park's only neo-classical building. The Naumburg Orchestral Concerts, founded in 1905 and America's oldest, outdoor classical music concert series take place there as a free gift to the public, each summer.

Behind it, the wisteria pergola[4] parallels the Mall at the top of a slope; it provides screening and separation from the Mall for another outdoor concert stage in New York's Central Park, Central Park SummerStage.

Grading the Promenade and the Center Drive that swept along its western flank offering views over the Sheep Meadow[5] was done in 1858.[6]

The Mall, designated the "Promenade" in Olmsted and Vaux's "Greensward" plan of 1857, was called the "open air hall of reception" in the text that accompanied the plan in the competition. "A 'grand promenade' was 'an essential feature of a metropolitan park', the designers acknowledged, yet its formal symmetry— like all architecture in the park— must be rendered 'subservient' to the natural 'view as the ultimatum of interest'", Roy Rosenzweig and Elizabeth Blackmar reported in their history of Central Park.[7]

By 1860, with slender elm saplings growing in turf, it was ready for the first of the open-air concerts, in Calvert Vaux's octagonal bandstand with its eight-sided bell-shaped roof.[8] The New-York Tribune encouraged hesitant New Yorkers of the better sort: "We saw no conduct which would have been out of place or inconvenient to the most scrupulous or delicate nerves in the private garden of a gentleman." Still some preferred to hear the tunes from a little distance, in an open carriage, "without the inconvenience of descending" a contemporary Guide phrased it, and, as the park's modern historians noted, "looming over the heads of the rest of the crowd, symbolizing and reinforcing the class hierarchy Central Park was supposed to transcend".[9] Two flanking avenues of American elms were planted to give the high-arched shady canopy that was becoming the mode for prime residential streets in affluent towns of New England, Pennsylvania and Ohio; the elms are gone from America's Elm Streets, victims of Dutch Elm disease, but the Central Park elms, isolated from contamination from neighboring elms and closely watched by the gardeners of the Central Park Conservancy, now form one of the largest remaining plantations of the trees.

Olmsted was strongly opposed to punctuating the carefully planned rural aspect of the park with statuary, but the pressure to memorialize cultural heroes has resulted in the Mall becoming a kind of "Literary Walk". The first sculpture to be sited here was in commemoration of the New York society poet Fitz-Greene Halleck, but more than half of the sculptures erected in Central Park in the nineteenth century were projects financed and promoted by ethnic associations of the more recent immigrants: "immigrant New Yorkers were emphasizing their status as 'cultivated' people by honoring leading cultural (not political or military) figures in the city's most 'cultivated' space".[10] The statue of Christopher Columbus centered at the south end of the Mall was financed by the elite New-York Historical and Genealogical Society; however, it "could be seen as an 'ethnic' assertion by native-stock Americans who felt beleaguered in a city more and more dominated by immigrants."[10]