President of the Czech Republic

The framers of the Constitution of the Czech Republic intended to set up a parliamentary system, with the prime minister as the country's leading political figure and de facto chief executive and the president as a ceremonial head of state. However, the stature of the first president, Václav Havel, was such that the office acquired greater influence than the framers intended.[3]

The President of the Czech Republic has the authority to act independently in a number of substantive areas. One of the office's strongest powers is that of veto, which returns a bill to parliament. Although the veto may be overridden by parliament,[4] the ability to refuse to sign legislation acts as a check on the power of the legislature. The only kind of bills a president can neither veto nor approve are acts that would change the constitution.[5]

The president also has the leading role in the appointment of persons to key high offices, including appointment of judges to the Supreme and Constitutional Courts (with the permission of the Senate), and members of the Bank Board of the Czech National Bank.[5]

There are some powers reserved to the president, but can be exercised only under limited circumstances. Chief among these is the dissolution of the Chamber of Deputies. While the president can dissolve the Chamber on his own authority,[5] forcing a new election of that body within 60 days,[6] this can be done only under conditions prescribed by the constitution.[7]

Many of the president's powers can only be exercised with the assent of the Government, as expressed by the signature of the Prime Minister. These include all matters having to do with foreign relations and the use of the military, the appointment of judges to lower courts, and the granting of amnesty. Except when the Chamber of Deputies has been dissolved because of its failure to form or maintain a functioning government,[7] the president may call for elections to the Chamber and the Senate only with the Prime Minister's approval.[8]

The president also shares responsibility with the Chamber of Deputies for appointing the president and vice president of the Supreme Control Office[9] – the body in charge of implementing the national budget – although this appointment does not technically require the signature of the Prime Minister.[5]

Under Art. 54 (3) and 65 (3) of the constitution, the president may not be held liable for any alleged criminal acts while executing the duties of office. Such prosecution may not occur either while the president is in office or at any time thereafter. Furthermore, Art 65 (1) prevents trial or detention for prosecution of a criminal offense or tort while in office. The only sort of prosecution allowed for a sitting president is that of high treason, which can only be carried out by the Senate, and can only result in removal from office and a ban on regaining the office at a later date.[10]

Many of the duties of the Czech president can be said to be ceremonial to one degree or another, especially since he or she has relatively few powers independent of the will of the Prime Minister. A good example of this is the status as commander in chief of the military. No part of these duties can take place but through the assent of the Prime Minister. In matters of war, he is in every sense merely a figurehead, since the constitution gives all substantive constitutional authority over the use of the armed forces to the parliament.[11][12] In fact, the only specific thing the constitution allows the president to do with respect to the military is to appoint its generals – but even this must be done with the signature of the Prime Minister.[8]

Until 2012, the office of president was filled following an indirect election by the Parliament of the Czech Republic. In February 2012, a change to a direct election was passed by the Senate,[14] and after the related implementation law also was passed by both chambers of the parliament, it was enacted by presidential assent on 1 August 2012;[15] meaning that it legally entered into force on 1 October 2012.

The term of office of the president is 5 years.[16] A newly elected president will begin the five-year term on the day of taking the official oath.[17] Candidates standing for office must be 40 years of age, and must not have already been elected twice consecutively.[18] Since the only term limit is that no person can be elected more than twice consecutively, a person may theoretically achieve the presidency more than twice. Prospective candidates must either submit petitions with the signatures of 50,000 citizens, or be nominated by 20 deputies or 10 senators.

The constitution does not prescribe a specific date for presidential elections, but regulate that elections shall occur in the window between 30 and 60 days before the end of the sitting president's term, provided that it rightfully was called at least 90 days prior of the selected election day.[19] In the extraordinary event of a president's death, resignation or removal, the election can be held at the earliest 10 days after being officially called and shall at the latest be held 80 days after vacancy of the presidential seat.[17] If no candidate receives a majority, a runoff is held between the top two candidates.

The constitution makes specific allowances for the failure of a new president to be elected. If a new president has not been elected by the end of a president's term, or if 30 days elapse following a vacancy, some powers are moved to prime minister, some are moved to the chairman of the Chamber of Deputies, or to the chairman of the Senate, if parliament is in a state of dissolution at the time of the vacancy.[20]

Under Article 58 of the current Czech Constitution, nominees to the office must be put forward by no fewer than 10 Deputies or 10 Senators. Once nominees are in place, a ballot can begin. Each ballot can have at most three rounds. In the first round, a victorious candidate requires an absolute majority in both the Chamber of Deputies and the Senate. Given a 200-seat Chamber and an 81-seat Senate, a successful first-round candidate requires 101 deputies and 41 senators.[21]

Should no single candidate achieve a majority of both houses then present, a third round is necessitated. In this final round, which can happen within 14 days of the first round, an absolute majority of deputies and senators present suffices.[22] At this stage, the individual houses of parliament are not considered separately. Assuming that all members of parliament are present, all that is required to win is 141 votes, regardless of the house of origin. If no candidate wins in the third round, another ballot has to be considered in a subsequent joint session of parliament.[23] The process continues under the same rules until a candidate prevails.

In 1993, the Republic's first president, Václav Havel, had little difficulty achieving victory on the first round of the first ballot, but his re-election bid proved bumpier. In 1998, he was elected with a cumulative seven-vote margin on the second round of the first ballot.[24] By contrast, his successor, Václav Klaus, has required the full measure of the process. He narrowly won election on the third ballot at the 2003 election and on the sixth (second attempt, third ballot) in 2008. Both his elections were won in the third round. His biggest margin of victory was two votes.

Following the 2003 and 2008 elections, which both required multiple ballots, some in the Czech political community have expressed dissatisfaction with this method of election. In 2008, Martin Bursík, leader of the Czech Green Party, said of the 2008 vote, "We are sitting here in front of the public somewhat muddied by backstage horse-trading, poorly concealed meetings with lobbyists and intrigue."[25] Calls have been made to reform the system into a direct election, whereby the people of the Republic might be involved in the voting. However, others have pointed to the fact that the presidency has always been claimed by indirect vote, stretching back through several predecessor states to the presidency of Tomáš Masaryk. Charles University political scientist Zdeněk Zbořil, for instance, intimated that direct voting could result in a president and prime minister who were hostile to each other's goals, leading to bitter deadlock. Despite the enthusiasm shown by prominent leaders like Jiří Čunek (Christian and Democratic Union – Czechoslovak People's Party) and Jiří Paroubek (Czech Social Democratic Party), the ruling Civic Democratic Party under both President Václav Klaus and Prime Minister Mirek Topolánek is more skeptical. As Topolánek has said, "I definitely consider it a benefit that our presidential elections are not preceded by some campaign that is unavoidable in a direct election and causes rifts among citizens. We recently saw this in Poland, where the presidential elections immediately followed the parliamentary ones. When someone talks about how our method of selecting the head of state is undignified, he should first weigh the consequences of a direct vote."[26]

Aside from death, there are only three things that can effect a president's removal from office:

Since mandate of first Czechoslovak president Tomáš Garrigue Masaryk, is in using Bedřich Smetana's introduction of opera Libuše, which is symbol of patriotism of Czech people during Czech National Revival under Austro-Hungarian monarchy.

The office of president carries with it an iconography, established through laws passed by the parliament. Perhaps the most visible of these is the flag of the president, as seen at top right. His official motto is the same as that of the Republic: "Pravda vítězí" ("Truth prevails").

Furthermore, the president, while in office, is entitled to wear the effects of the highest class of the Republic's two ceremonial orders, the Order of the White Lion and the Order of Tomáš Garrigue Masaryk. Along with the right to wear these decorations, the president is deemed to be in charge of the affairs of these orders.[29][30] 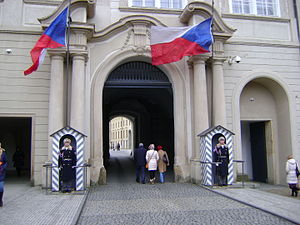 Entrace to the residence of the President of the Czech Republic, Prague Castle.

The official residence of the president of the Czech Republic is Prague Castle. However, the living quarters are small and not particularly comfortable, so recent presidents (Václav Havel and Václav Klaus) have chosen to, in reality, live elsewhere. The last president to reside more or less full-time in the residence in the Prague Castle was Gustáv Husák.[citation needed] The president also maintains a summer residence at the castle in the village of Lány, 35 km west of Prague.

Main article: List of Presidents of the Czech Republic