From Infogalactic: the planetary knowledge core
Jump to: navigation, search
Not to be confused with Archduchess Maria Christina of Austria (1574–1621).

Maria Christina, Duchess of Teschen (Maria Christina Johanna Josepha Antonia; 13 May 1742 – 24 June 1798), called "Mimi", was the fourth daughter and fifth child of Maria Theresa of Austria and Francis I, Holy Roman Emperor. She was Governor of the Austrian Netherlands from 1781 until 1793. She was an older sister of Marie Antoinette. 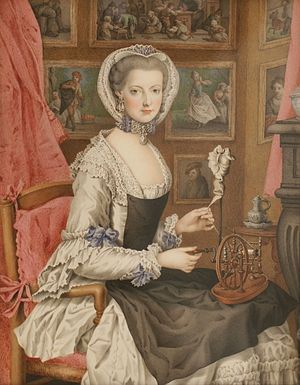 Born in 13 May 1742 at Vienna, Austria, Maria Christina was the fourth but second surviving daughter of Empress Maria Theresa and Emperor Francis I. She was her mother's favourite child because they shared the same birthday. Maria Christina was not only beautiful but she was also highly intelligent and artistically gifted. The doting partiality that the Empress showed her caused intense jealousy in her brothers and sisters, especially Emperor Joseph II. His first wife, Isabella of Parma, became her best friend, and named her second daughter after her.

Maria Christina was a very intelligent woman who knew how to manipulate her parents, especially her mother. The sudden death of her father, Francis I, and the depression that overcame Maria Theresa following her widowhood meant that Maria Christina was able to convince her vulnerable and sentimental mother into permitting her to marry for love rather than for reasons of state. She was the only child allowed to do so. She chose her second cousin Prince Albert of Saxony, who had neither great wealth nor a throne to offer; he was made an archduke and governor of Hungary, and the couple was given the duchy of Teschen. In 1780, the couple was appointed joint governors of the Austrian Netherlands. The marriage was described as happy. 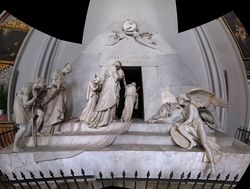 Cenotaph to Marie Christine of Austria in the Augustinerkirche, by Canova 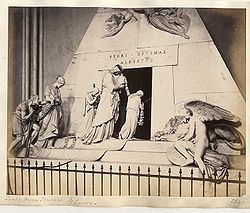 One of her sisters, the Archduchess Maria Amalia, was also in love with a minor prince, Charles of Zweibrücken, but was forcibly married off to Ferdinand of Parma. Maria Christina's luck in being permitted to marry the man she loved embittered Maria Theresa's other daughters, who already resented their mother's favouritism. Not only was she able to marry her prince of choice, but her mother also provided for a huge dowry and presented the couple with the Duchy of Teschen. Maria Amalia, the daughter most affected, remained estranged from her mother for the rest of the Empress' life. Although Marie Antoinette wrote her letters later on from France, Maria Christina did not enjoy the same closeness Marie Antoinette accorded to her other sisters, Maria Amalia and Maria Carolina, who all exchanged not only letters but also dresses, portraits and other gifts. Their brother Leopold also disliked Maria Christina for her scolding ways, her sharp tongue and above all, her habit of confiding in the Empress, clearly indicating that Maria Christina used her paramount influence with their mother to tell on her siblings, make trouble, and treat her siblings unkindly. She used the preference and weakness that her sister-in-law Isabella had for her to exert some influence on her brother and mother's heir, Joseph.

Maria Christina's siblings, especially her sisters, never reconciled with her, even after the death of their mother. Queen Marie Antoinette of France, her youngest sister, pointedly ignored her during her visit to France and treated her as just another state guest when she visited Versailles. Marie Christine's request to see the Petit Trianon, her sister's private retreat, was ignored. In her turn, when Marie Antoinette was guillotined in 1793, Maria Christina was reported to have remarked coolly that her sister ought never to have married.

Maria Christina and Prince Albert of Saxony married 8 April 1766. After their marriage, they were granted the Duchy of Teschen as nominal joint rulers. Maria Christina was given a large dowry, and Albert was made royal governor of Hungary with residence in Pozsony.

The relationship between Maria Christina and Albert became very happy. In Pozsony, they were able to host a luxurious court life with frequent parties and visits home to Vienna. They managed to make themselves popular among the Hungarian nobility, and devoted themselves to their common interest in art, which made Pozsony a culture center during their time there; it was here they began their art collection, which was to become the famous Albertine Art Collection, with their collection of drawings and engravings. Maria Christina upheld a frequent correspondence with her mother. From 1775 to 1776, Maria Christina and Albert made a trip to Italy where they visited her siblings; Leopold in Florence, Maria Carolina in Naples, Maria Amalia in Parma and Ferdinand in Milan, after which she reported to their mother about their lives. They also visited the pope.

Regent of the Austrian Netherlands

In 1780, after the death of Charles Alexander of Lorraine, Maria Christina and her spouse Prince Albert of Saxony, were appointed joint governors of the Austrian Netherlands by her mother, Empress Maria Theresa. However, Maria Theresa died before they could assume office, and her brother Joseph II assumed sole regency. Joseph II confirmed their appointment, although he reduced their income, reportedly to have her leave Austria as he had his other sisters expelled from court at their mother's death.

Maria Christina and Albert had their official entrance as joint General governors of the Austrian Netherlands in Brussels on 10 July 1781. Although officially regents, Maria Christina and Albert were not, in reality, allowed to exert any independent authority over the affairs of policy whatsoever. Maria Christina's brother, Emperor Joseph, limited her and her spouse to mere symbolic figureheads and restricted their activity to ceremonial duties, while the real power was exerted by advisers appointed to them by Joseph, who were loyal to his ideas. The tasks of Maria Christina and Albert were merely to execute the orders and sign the decrees made by Joseph through the advisers and ministers he appointed to them. From 1783, Joseph had Ludovico Carlo di Belgiojoso serve as their minister and de facto regent, and who made himself immensely unpopular.

Maria Christina and Albert performed representational duties, received foreign guests, and enjoyed hunting. Between 1782 and 1784, they had the palace of Laeken constructed for their residence, were they completed their famous Albertine art collection. During the winter of 1785-86, they visited Vienna, and in 1786, they made a visit to the royal court of Versailles in France.

In 1787, Maria Christina was forced to introduce the radical Josephine Reforms in the Austrian Netherlands. She was ordered to do so by Joseph through Ludovico di Carlo Belgiojoso, but did so unwillingly and predicted that they would lead to protests. The reforms lead to violent riots. On 30 May 1787, a mob, who demanded that Belgiojoso be removed from power, broke into her residence and forced her to retract the Imperial decree. Maria Christina described it to Joseph: "People thronging in thousands, with their hat blazoned with the arms of Brabant, made it a day of terror - all the more so as we had certain information that it was intended to begin that very evening the pillage of the royal and ecclesiastical treasuries, that the minister and those members of the Government who were in ill odour [sic] were to be put to death, and complete independence declared."[1]

Joseph II reacted by calling both Maria Christina and Albert as well as Ludovico di Carlo Belgiojoso to Vienna, and appointing Ferdinand av Trauttmansdorff as minister to deal with the riot by use of force. In January 1788, Maria Christina and Albert were able to return to Brussels. The Josephine reforms were enforced again, though more carefully.

During the summer of 1789, rebellions arouse in the territory inspired by the French revolution. The regents defied Joseph's order to return to Vienna but left Laeken for Brussels. On 24 October 1789, the Brabant Revolution occurred, and on 18 November, the regents left the Austrian Netherlands for her brother Maximilian in Bonn. In Bonn, Maria Christina tried to negotiate with the rebels. This failed when a letter from her to Trauttmansdorff was made public to discredit her. In January 1790, Hendrik van der Noot declared the Belgian Republic.

In February 1790, Joseph II was succeeded by her younger brother Leopold II, with whom she could work much better. He gave her more responsibility and worked with her to achieve a solution for how to reestablish Austria in Belgium. On 15 June 1791, Maria Christina and Albert were able to return and assume their regency in Brussels, this time with more actual power than what Joseph had allowed them. By her good cooperation with Leopold and his minister, Franz Georg Karl von Metternich, Maria Christina ensured a certain degree of stability through a policy of amnesty. Maria Christina and Albert were confirmed as regents by Leopold's successor Francis II in March 1792. In October 1792, the Austrian Netherlands were invaded by Revolutionary France, and after the Battle of Jemappes on 6 November, Maria Christina and Albert left for Münster in Germany, having evacuated their art collection by sea.

Maria Christina and Albert spent the winter in Münster and then lived in Dresden in Saxony, until they were able to return to Vienna in 1794.

Maria Christina had only one child, Princess Maria Theresa of Saxony, who died on 17 May 1767, the day after her birth. She was unable to have other children. The couple then became the adoptive parents of Maria Christina's nephew - son of her brother Leopold and Maria Ludovika of Two Sicilies (both died 1792 very young) - Archduke Charles of Austria. 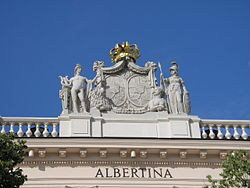 Arms of Marie Christine of Austria and Albert of Saxony, Dukes of Teschen

Maria Christina is buried in the Tuscan Vault of the Imperial Crypt in Vienna, along with her husband and daughter. The famous and moving monument by Canova that her husband erected to her memory is in the Augustinerkirche.

The personal coat of arms of the Duchess of Teschen impales Consort's shield, the arms of King Augustus II of Poland – Quarterly, I and IV gules, a eagle argent, armed, beaked, langued, liée, and crowned Or (for Poland); II and III Gules, a knight armed cap-à-pie mounted on a horse salient argent, brandishing a sword proper and maintaining a shield azure charged with a cross of Lorraine Or (for Lithuania); overall and inescutcheon barry sable and Or, a crancelin vert (for Saxony); - enté en point azure an eagle or (for Teschen) (her husband's shield) to the dexter (viewer's left) with her brother's shield, the arms of Holy Roman Emperor Joseph II – Quarterly, I barry of eight, gules and argent, impaling gules a patriarchal cross argent on a trimount vert (for Hungary); II gules a lion rampant argent, queue fourchée crossed in saltire, armed, langued, and crowned Or (for Bohemia); III bendy of six Or and azure, a bordure gules (for Burgundy); IV Or, in annulo six torteaux, the torteau in chief replaced by a roundel azure charged with three fleurs-de-lis Or (for the Medici family); overall and inescutcheon gules a fess argent (for Austria) impaling Or a bend gules three alerions argent (for Lorraine); - enté en point azure an eagle or (for Teschen).