Saint John's Co-Cathedral (Maltese: Kon-Katidral ta' San Ġwann) is a Roman Catholic co-cathedral in Valletta, Malta, dedicated to Saint John the Baptist. It was built by the Order of St. John between 1572 and 1577, having been commissioned by Grand Master Jean de la Cassière as the Conventual Church of Saint John (Maltese: Knisja Konventwali ta' San Ġwann). The church was designed by the Maltese architect Girolamo Cassar, who designed several of the more prominent buildings in Valletta. In the 17th century, its interior was redecorated in the Baroque style by Mattia Preti and other artists. The church is considered to be one of the finest examples of high Baroque architecture in Europe and one of the world's great cathedrals.[1]

St. John's Co-Cathedral was commissioned in 1572 by Jean de la Cassière, Grand Master of the Order of St. John. The church was designed by the Maltese architect Girolamo Cassar, who was also responsible for the construction of many important buildings in Valletta. Once St. John's was completed in 1577, it became the new conventual church of the Order instead of St. Lawrence's Church in the Order's former headquarters Birgu.[2] Construction of the oratory and sacristy began in 1598, during the magistracy of Martin Garzez, and they were completed by Grand Master Alof de Wignacourt in 1604.[3]

For the first century of its existence, the church's interior was modestly decorated. However, in the 1660s, Grand Master Raphael Cotoner ordered the redecoration of the interior so as to rival the churches of Rome. Calabrian artist Mattia Preti was in charge of the embellishment, and effectively completely transformed the interior in the Baroque style.[4] In 1748, Grand Master António Manoel de Vilhena built annexes on the side of the cathedral.[3]

St. John's remained the conventual church of the Order until the latter was expelled from Malta with the French occupation in 1798.[4] Over time, the church grew to equal prominence with the archbishop's cathedral at Mdina. In the 1820s, the Bishop of Malta was allowed to use St John's as an alternative see and it thus formally became a Co-Cathedral.[5]

In 1831, Sir Walter Scott called the cathedral a "magnificent church, the most striking interior [he had] ever seen."[5] Later on in the 19th century, Giuseppe Hyzler, a leader of the Nazarene movement, removed some of the Baroque art of the cathedral, including the ornate altar in the Chapel of the Langue of France.[6]

The cathedral's exterior was slightly damaged by aerial bombardment in 1941, during World War II, barely escaping total destruction. The contents of the cathedral had been transferred elsewhere before the bombardment, so no works of art were lost.[4] 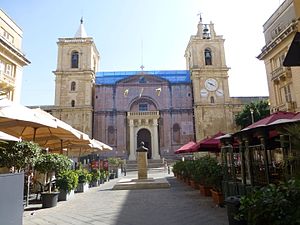 The façade of St. John's Co-Cathedral being restored in 2014

The cathedral was restored between the late 1980s and the early 1990s. In 2001, the St. John's Co-Cathedral Foundation was set up to administer and conserve the cathedral and its museum. The sides of the cathedral were restored between 2008 and 2010, and a complete restoration of the exterior began to be carried out in July 2014. This restoration is being directed by architect Jean Frendo and eight restorers. Restoration of the central part of the façade was completed in September 2015,[7] and the project is expected to be ready in 2017.[8]

Today, the cathedral is one of the most popular tourist attractions in Malta,[4] and it is listed on the National Inventory of the Cultural Property of the Maltese Islands.[6]

The cathedral's exterior is built in the Mannerist style typical of its architect Girolamo Cassar. Its façade is rather plain but well-proportioned, being bounded by two large bell towers.[1] The doorway is flanked by Doric columns supporting an open balcony from which the Grand Master used to address the people on important occasions.[3]

Overall, the exterior is rather austere and it is reminiscent of a fortress, reflecting both Cassar's style as a military engineer as well as the Order's mood in the years following the Great Siege of Malta in 1565.[4] 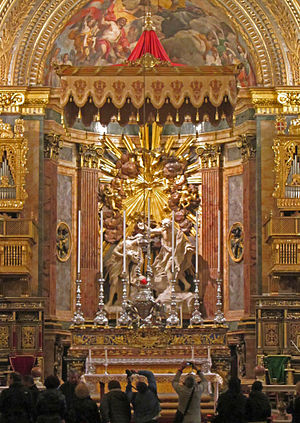 The cathedral's interior is extremely ornate, standing in sharp contrast with the façade. The interior was largely decorated by Mattia Preti, the Calabrian artist and knight, at the height of the Baroque period. Preti designed the intricate carved stone walls and painted the vaulted ceiling and side altars with scenes from the life of John the Baptist. Interestingly, the figures painted into the ceiling next to each column initially appear to the viewer as three-dimensional statues, but on closer inspection we see that the artist cleverly created an illusion of three-dimensionality by his use of shadows and placement. Also noteworthy is the fact that the carving was all undertaken in-place (in-situ) rather than being carved independently and then attached to the walls (stucco). The Maltese limestone from which the Cathedral is built lends itself particularly well to such intricate carving. The whole marble floor is an entire series of tombs, housing about 400 Knights and officers of the Order.[9] There is also a crypt containing the tombs of Grand Masters like Philippe Villiers de L'Isle-Adam, Claude de la Sengle, Jean Parisot de Valette, and Alof de Wignacourt. 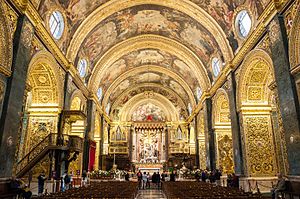 In 1666, a project for the main altar by Malta's greatest sculptor, Melchiorre Cafà, was approved and begun. Cafà intended a large sculpture group in bronze depicting the Baptism of Christ. Following Cafà's tragical death in 1667 in a foundry accident while working on this work in Rome, the plans were abandoned. Only in 1703, Giuseppe Mazzuoli, Cafà's only pupil, finished a marble group of the Baptism of Christ which might have been influenced by his master's undocumented designs but certainly is strongly dependent on a small baptism group by Alessandro Algardi.[10]

The funerary monument of Grand Master Marc'Antonio Zondadari (died 1722), nephew of Pope Alexander VII, is located close to the main entrance. It was originally meant to be installed in the Chapel of the Langue of Italy, but it was too large so it was placed in the nave.[11] 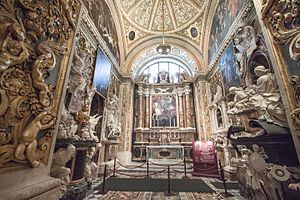 Chapel of the Langue of Aragon

The Cathedral contains nine rich chapels, one dedicated to Our Lady of Philermos and the rest dedicated to the patron saints of each of the Order's eight langues. The following chapels are located on the south side of the church: 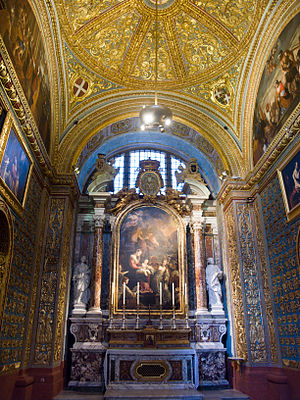 Chapel of the Langue of Italy

On the north side of the church, one finds the following chapels: 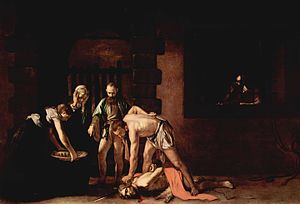 The painting depicting The Beheading of Saint John the Baptist (1608) by Caravaggio (1571–1610) is the most famous work in the church. Considered one of Caravaggio's masterpieces and the only painting signed by the painter, the canvas is displayed in the Oratory for which it was painted. Restored in the late 1990s in Florence, this painting is one of Caravaggio's most impressive uses of the chiaroscuro style for which he is most famous with a circle of light illuminating the scene of St John's beheading at the request of Salome. The oratory also houses Caravaggio's Saint Jerome Writing (1607–1608). 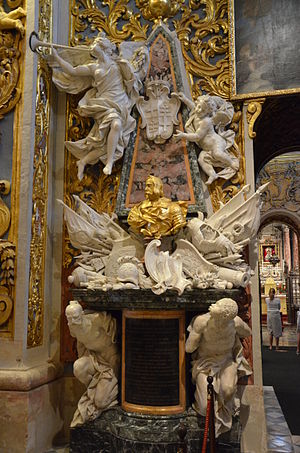 Monument to Grand Master Nicolas Cotoner at the Chapel of Aragon

Another impressive feature of the church is the collection of marble tombstones in the nave in which were buried important knights. The more important knights were placed closer to the front of the church. These tombstones, richly decorated with in-laid marble and with the coats of arms of the knight buried below as well as images relevant to that knight, often telling a story of triumph in battle, form a rich visual display in the church.

Adjoining to the church is the St John's Co-Cathedral Museum containing art objects. Among the contents of the museum there are the Flemish Tapestries which were donated by Ramon Perellos y Roccaful,[21][22] paintings of Grand Masters Jean de la Cassière, Nicolas Cotoner and Manuel Pinto da Fonseca, and paintings which were formerly in the side chapels such as St. George killing the Dragon by Francesco Potenzano. 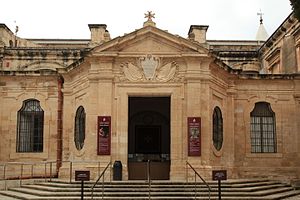 Visitors' entrance to the co-cathedral

St. John's Co-Cathedral is located in the centre of Valletta, and it is a short walk away from the bus terminus near City Gate. The main entrance of the cathedral is in St John's Square, but the visitors' entrance is from Great Siege Square in Republic Street, facing the Law Courts.[23]

The cathedral is open to the public from Mondays to Fridays between 09:30 and 16:30 (last admission at 16:00), and on Saturdays between 09:30 and 12:30 (last admission at 12:00). It is closed on Sundays and public holidays. The entrance fee is €10 for adults, €7.50 for students or senior citizens, while children under the age of 12 enter free of charge when accompanied by an adult. This fee includes the provision of audio guides available in Maltese, English, Italian, French, German, Spanish, Japanese and Russian.[24]

People visiting the cathedral in order to pray do not have to pay the entrance fee.[24]

The bells of St. John's Co Cathedral at Valletta: