The Société Normande de Peinture Moderne, also known as Société de Peinture Moderne, or alternatively, Normand Society of Modern Painting, was a collective of eminent painters, sculptors, poets, musicians and critics associated with Post-Impressionism, Fauvism, Cubism and Orphism. The Société Normande de la Peinture Moderne was a diverse collection of avant-garde artists; in part a subgrouping of the Cubist movement, evolving alongside the so-called Salon Cubist group, first independently then in tandem with the core group of Cubists that emerged at the Salon d'Automne and Salon des Indépendants between 1909 and 1911 (i.e., Albert Gleizes, Jean Metzinger, Fernand Léger, Robert Delaunay and Henri Le Fauconnier). Historically, the two groups merged in 1912, at the Section d'Or exhibition, but documents from the period prior to 1912 indicate the merging occurred earlier and in a more convoluted manner. 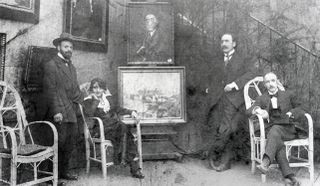 From left to right: Robert Antoine Pinchon, Mrs. Dumont, La Broue and Pierre Dumont, at an exhibition before World War I

To promote their eclecticism the group published a "manifesto" called "Almanach pour 1908" which included literary and graphic works by artists typically associated with the new generation of l'École de Rouen, as those of well-known Parisian artists.[5] This high quality catalog was published in an edition of 450.[1][2]

5 June 1909 the statutes of Société de Peinture Moderne presented 22 May are published in the Journal Officiel. The founders, Pierre Dumont, Robert Antoine Pinchon, Yvonne Barbier, and Eugène Tirvert, declare the formation of the "Société de Peinture Moderne, which has the goal of informing the general public of a modern artistic trend through a series of exhibitions".[1]

The first of five exhibitions organized by the Société Normande de Peinture Moderne took place at the Salle Boieldieu in Rouen, 65 rue Ganterie, 20 December 1909 – 20 January 1910. The preface to the exhibition was written by Élie Faure (1873-1937). Faure was a friend of Eugène Carrière in 1904 and was a member of the Comité du Salon d'Automne and a juror for the Salon d'Automne paintings in 1907. Faure, who had trained as a doctor and had politically active links, wrote art criticism from April 1902 in L'Aurore. He had studied at the elite Parisian Lycee Henri IV (1887-1891) under the philosopher Henri Bergson; an influential force of inspiration amongst the Cubists.[9][10]

On 6 May 1911 the Société Normande held a second exhibition 41 rue du Gros-Horloge, in the center of Rouen. The preface of the catalog was written by Élie Faure. Lectures during the exhibition were given on Thursdays and concerts on Sundays.[10]

From 20 November to 16 December 1911 the Société Normande organized their first exhibition in Paris which took place at the Galerie d'Art Ancien et d'Art Contemporain, 3 Rue Tronchet. The preface of the catalog was written by René Blum (1878-1942), the coeditor, journalist and art critic who between 1910 and 1914 wrote in Gil Blas.[9] His brother, Léon Blum, was a literary critic and future Socialist politician. René Blum, in his preface, asserted that the advent of photography had liberated artists from the need to imitate nature, and that 'pure imagination' as a source for inspiration had resulted in art works whose 'originality of forms somewhat outstripped the capacity of our understanding'. Echoing the avant-garde mandates of Élie Faure 1909 preface that artists of the Société Normande had far exceeding 'the mob's habits of seeing' in pursuit of their 'imperious' imaginations.[9]

During the course of 1911 this group assisted Albert Gleizes in the preparation of the Salon de la Section d'Or exhibition that would be held in October 1912 at the Galerie La Boétie, Paris. On Mondays there were regular meetings with Gleizes in his studio in the Paris suburb of Courbevoie.[10]

The Société Normande held from 15 June to 15 July 1912 their fourth exhibition at the Salle du skating in Rouen. Forewords in the catalog were written by fr (Maurice Raynal) and Élie Faure. In his forward, Faure—in addition to scientific, social, ethical and political overtones—included a Bergsonian philosophical overlay of 'intuition', 'creativity' and 'dynamism' to the avant-gardist discourse, something missing from his 1911 preface. Metzinger and Gleizes would do the same in writing the Cubist manifesto Du "Cubisme", published for the occasion of the Salon de la Section d'Or.[9]

Maurice Raynal, a preeminent art critic, played a major role in defending Cubism in Kantian terms. In 1912 he replaced Apollinaire at L'Intransigeant and simultaneously was hired by Louis Vauxcelles to write in Gil Blas. In his forward for this exhibition⎯his first writing on Cubism⎯Raynal paints the artistic avant-garde as parallel to scientists whose 'very data will turn the common understanding and ordinary sensibilities upside down'. Science and visual arts evolved together leading to 'a more positivistic age'. Artists, just as scientists, were able to capture the 'essence of things'. The goal or art, writes Raynal, is not the 'slavish imitation of nature', but its 'interpretation in accordance with the artist's intellectual capacity'.[9]

At this exhibition the general public of Rouen and surrounding areas were introduced to Cubism for the first time, but three paintings by Francis Picabia attracted particular attention for their high degree of abstraction; Tarentelle, Port de Naples and Paysage. In addition, works were exhibited by Gleizes (5), Dumont (2), Lhote (3), Léger (2), Gris (3), Villon (6), La Fresnaye (2), and Tobeen (3). This exhibition was in effect the dress rehearsal for the Salon de la Section d'Or.[10]

During the exhibition, on June 23, a paper was presented by Guillaume Apollinaire, entitled Le sublime modern. On Sunday, July 7 the art critic Maurice Raynal gave a lecture on Cubism. The entrance fee was 1 FF.[10]

The 1912 Salon de la Section d'Or was arguably the most important pre-World War I Cubist exhibition. During the previous year the Cubists and a large number of their associates had exhibited at the Galerie de l'Art Contemporain (rue Tronchet, Paris) under the auspices of the Société Normande de Peinture Moderne. This exhibition had received some attention in the press (l'Autorité and Paris Journal), though due to the diversity of the works presented it had been referred to as an exposition des fauves et cubistes. The Salon de la Section d'Or, however, was generally accepted as being entirely Cubist in nature. Over 200 works were displayed, and the fact that many of the artists showed artworks representative of their development from 1909 to 1912 gave the exhibition the allure of a Cubist retrospective.[12][13]

Practically all the artists of the Section d'Or had already been brought together the previous year (Nov-Dec, 1911) by the Société Normande de Peinture Moderne.[13]

The 5th and last exhibition of the Société Normande de la Peinture Moderne, which included works by Utrillo, Friesz, Guillaumin, Luce, Vlaminck, Pinchon and others, transpired in 1914, just before the onset of World War I; an event that largely ended the group's activities.