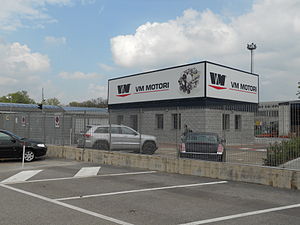 VM Motori was founded by two entrepreneurs, Claudio Vancini and Ugo Martelli (hence the "VM") in 1947.

VM merged with Stabilimenti Meccanici Triestini in Trieste in 1971, then Finmeccanica took a majority stake in the combined company.

In 1989, Finmeccanica restructured, selling its stake in VM Motori to company managers and Midland Montague in a leveraged buyout, leaving the company with its single Cento plant.

In 2003, Penske Corporation purchased a 51% stake in VM Motori; in 2007, Penske bought the remaining 49% from DaimlerChrysler and subsequently sold 50% of it to General Motors.[1] As of 2007, both deals were awaiting European regulatory approval and the value of the deal was not known.

In September 2008, GAZ Group announced plans to purchase a 50% stake from Penske Corp,[2] but ultimately cancelled them in February 2009.[3]

In 1947, the company produced the first Italian air-cooled diesel engine with direct injection.

In 1964, the company introduced entire new families of air-cooled diesel engines for fishing boats and the industrial machine markets.

The Alfa Romeo Alfetta, produced in Arese, rolled off the line with a VM Motori engine under the bonnet in 1979, signaling VM's move to the OEM automotive market.

During the 1980s, British Leyland chose VM engines as the smoothest, most petrol-like units available for diesel models of their Range Rover and Rover SD1; the choice continued with the later Rover 800.

The after-cooled, electronic-combustion, "Turbotronic" engine was unveiled in 1990. It was supplied to Alfa Romeo, Chrysler, Ford, General Motors, and Rover.

In 1995, when OEM automotive sales accounted for 75% of income, a major deal with Chrysler saw agreements to supply engines for their Jeep Grand Cherokee and Voyager (2.5-litre) models. VM Motori's 2.8-litre common rail turbodiesel engine was chosen for the Jeep Liberty CRD(Cherokee in Europe). The 2005 and later Chrysler Grand Voyager and 2012 model year Chevrolet Colorado That sale in Thailand is also fitted with the VM 2.8-litre (R428) engine.

In the late 1990s, a new three-cylinder 1.5-litre turbocharged diesel engine was developed by VM Motori. It featured a single overhead camshaft, four valves per cylinder, and common rail direct fuel injection.[8] It was licensed to the South Korean manufacturer Hyundai,[nb 1] and was used in the second generation of the Hyundai Accent, the Hyundai Getz and the Hyundai Matrix.[9] These were produced and marketed between the fall of 2001 and the end of 2005.[9]

The latest vehicle to benefit from a 2.5 L VM Motori diesel engine is the purpose-built LTI (London Taxis International) London style taxicab. The TX4 is the first of the TX range of taxis to include a VM Motori engine.

The company is also selling its products to off-highway applications, such as marine and defense. MTU Friedrichshafen, a German diesel engine manufacturer, holds the exclusive sales rights for VM Motori off-highway engines outside of Italy.

In January 2011, VM Motori launched its brand new engine 3.0L V6 Variable Valve Timing A 630 DOHC With 241 HP and 550 N·m (410 lb·ft) of torque. Thanks to a collaboration with Fiat Powertrain Technologies, the engine features the latest FPT Common Rail Multijet2 technology for improved performance, fuel economy and NVH. In 2013, the engine was redesigned to comply with Euro5+ emissions standards.

The first applications of the A 630 DOHC were the 2014 Grand Cherokee and the 2014 Ram Eco-Diesel, the same engine, which is lightly tuned, also powers the Maserati Ghibli III. The engine won several awards including a slot in the top 10 best engines of 2014.[11][12]