From Infogalactic: the planetary knowledge core
Jump to: navigation, search
This article is about a King of Bohemia and Germany. For other uses, see Wenceslaus.

Wenceslaus (also Wenceslas; Czech: Václav; German: Wenzel, nicknamed der Faule ("the Idle");[1] 26 February 1361 – 16 August 1419) was, by inheritance, King of Bohemia (as Wenceslaus IV) from 1363 and by election, German King (formally King of the Romans) from 1376. He was the third Bohemian and third German monarch of the Luxembourg dynasty. Wenceslaus was deposed in 1400 as King of the Romans, but continued to rule as Bohemian king until his death.

Wenceslaus was born in the Imperial city of Nuremberg, the son of Emperor Charles IV by his third wife Anna von Schweidnitz, a scion of the Silesian Piasts, and baptized at St. Sebaldus Church. He was raised by the Prague Archbishops Arnošt of Pardubice and Jan Očko z Vlašimi. His father had the two-year-old crowned King of Bohemia in 1363 and in 1373 also obtained for him the Electoral Margraviate of Brandenburg. When in 1376 Charles IV asserted Wenceslaus' election as King of the Romans by the prince-electors, two of seven votes, those of Brandenburg and Bohemia, were held by the emperor and his son themselves.

In order to secure the election of his son, Charles IV revoked the privileges of many Imperial Cities that he had earlier granted, and mortgaged them to various nobles. The cities, however, were not powerless, and as executors of the public peace, they had developed into a potent military force. Moreover, as Charles IV had organised the cities into leagues, he had made it possible for them to cooperate in large-scale endeavors. Indeed, on 4 July 1376, two days after Wenceslaus' election, fourteen Swabian cities bound together into the independent Swabian League of Cities to defend their rights against the newly elected King, attacking the lands of Eberhard II, Count of Württemberg. The city league soon attracted other members and until 1389 acted as an autonomous state within the Empire.

On Charles's death in 1378, Wenceslaus inherited the Crown of Bohemia and as Emperor-elect assumed the government of the Holy Roman Empire. In the cathedral of Monza there is preserved a series of reliefs depicting the coronations of the kings of Italy with the Iron Crown of Lombardy. The seventh of these depicts Wenceslaus being crowned in the presence of six electors, he himself being the seventh. The depiction is probably not accurate and was likely made solely to reinforce the claims of the cathedral on the custody of the Iron Crown.

In 1387 a quarrel between Frederick, Duke of Bavaria, and the cities of the Swabian League allied with the Archbishop of Salzburg gave the signal for a general war in Swabia, in which the cities, weakened by their isolation, mutual jealousies and internal conflicts, were defeated by the forces of Eberhard II, Count of Württemberg, at Döffingen, near Gafenau, on 24 August 1388. The cities were taken severally and devastated. Most of them quietly acquiesced when King Wenceslaus proclaimed an ambivalent arrangement at Cheb (Eger) in 1389 which prohibited all leagues between cities, while confirming their political autonomy. This settlement provided a modicum of stability for the next several decades, however the cities dropped out as a basis of the central Imperial authority. 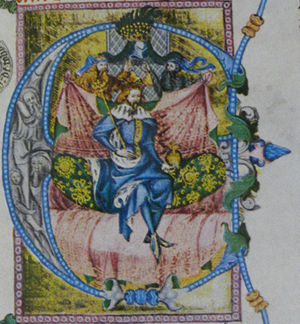 During his long reign, Wenceslaus' grip on power was tenuous at best, as he came into repeated conflicts with the Bohemian nobility led by the House of Rosenberg. On two occasions he was even imprisoned for lengthy spells by rebellious nobles.

But Wenceslaus' greatest liability proved to be his own family. Charles IV had divided his holdings among his sons and other relatives. Although Wenceslaus upon his father's death retained Bohemia, his younger half-brother Sigismund inherited Brandenburg, while John received the newly established Duchy of Görlitz in Upper Lusatia. The March of Moravia was divided between his cousins Jobst and Procopius, and his uncle Wenceslaus I was made Duke of Luxembourg. Hence the young king was left without the resources his father had enjoyed. In 1386, Sigismund became king of Hungary and became involved in affairs further east.

Wenceslaus also faced serious opposition from the Bohemian nobles and even from his chancellor, the Prague archbishop Jan of Jenštejn. In a conflict surrounding the investiture of the abbot of Kladruby, the torture and murder of the archbishop's vicar-general John of Nepomuk by royal officials in 1393 sparked a noble rebellion. In 1394 Wenceslaus' cousin Jobst of Moravia was named regent, while Wenceslaus was arrested at Králův Dvůr. King Sigismund of Hungary arranged a truce in 1396, and for his efforts was recognized as Wenceslaus' heir.

In the Papal Schism, Wenceslaus had supported Pope Urban VI. As Bohemian king he sought to protect the religious reformer Jan Hus and his followers against the demands of the Roman Catholic Church for their suppression as heretics. This caused many Germans to withdraw from the University of Prague, and set up their own university at Leipzig. Hus was executed in Konstanz in 1415, and the rest of Wenceslaus's reign in Bohemia featured precursors of the Hussite Wars that would follow his death during the Defenestrations of Prague.

In view of his troubles in Bohemia, Wenceslaus did not seek a coronation ceremony as Holy Roman Emperor and was long absent from the German lands. Consequently, he faced anger at the Reichstag diets of Nuremberg (1397) and Frankfurt (1398). The four Rhenish electors, Count Palatine Rupert III and the Archbishops of Mainz, Cologne and Trier, accused him of failing to maintain the public peace or to resolve the Schism. They demanded that Wenceslaus appear before them to answer to the charges in June 1400. Wenceslaus demurred, in large part because of renewed hostilities in Bohemia. When he failed to appear, the electors meeting at Lahneck Castle declared him deposed on 20 August 1400 on account of "futility, idleness, negligence and ignobility". The next day they chose the Palatine Elector as their king at Rhens, though Wenceslaus refused to acknowledge this successor's decade-long reign.

In 1402 Wenceslaus was again imprisoned and temporarily deposed[citation needed], this time by his younger brother Sigismund, with the support of the Czech nobility. Lord John of Liechtenstein, with his retinue of knights, successfully freed Wenceslaus from his Vienna prison in autumn of 1403 and accorded him refuge in his Moravian castle. John of Liechtenstein was at the time the Lord of the Mikulov demesne.[2]

Among the charges that Ruprecht III had used as the basis for his predecessor's deposition was the Papal Schism. King Ruprecht called the Council of Pisa in 1409, attended by defectors from both papal parties. They elected Antipope Alexander V, only worsening the situation, because he was not acknowledged by his two rivals, and from 1409 to 1417, there were three popes.

After the death of Ruprecht in 1410, his succession at first proved difficult, as both Wenceslaus' cousin Jobst of Moravia and Wenceslaus' brother Sigismund of Hungary were elected King of the Romans. Wenceslaus himself had never recognized his deposition and hence still claimed the kingship. Jobst died in 1411, and Wenceslaus agreed to give up the crown, so long as he could keep Bohemia. This settled the issue, and after 1411, Sigismund reigned as king and later also became Holy Roman Emperor.

The bishops and secular leaders, tired of the Great Schism, supported Sigismund when he called the Council of Constance in 1414. The goal of the council was to reform the church in head and members. What made it work was the translation of supreme authority from the popes to the council. In 1417, the council deposed all three popes and elected a new one, maintaining all the while that the council, and not the pope, was the supreme head of the church. By resolving the schism, Sigismund restored the honour of the imperial title and made himself the most influential monarch in the west.

Wenceslaus was married twice, first to Joanna of Bavaria, a scion of the Wittelsbach dynasty, on 29 September 1370. Following her death on 31 December 1386 (allegedly mangled by one of Wenceslaus' beloved deer-hounds), he married her first cousin once removed, Sofia of Bavaria, on 2 May 1389. He had no children by either wife.

Wencelaus was described as a man of great knowledge and is known for the Wenzel Bible, a richly illuminated manuscript he had drawn up between 1390 and 1400. However, his rule remained uncertain, varying between idleness and cruel measures as in the case of John of Nepomuk. Unlike his father, Wenceslaus relied on favouritism, which made him abhorrent to many nobles and led to increasing isolation. Moreover he probably suffered from alcoholism, which was brought to light in 1398 when he was unable to accept an invitation by King Charles VI of France for a reception at Reims due to his drunkenness.[3]

Wenceslaus died in 1419 of a heart attack during a hunt in the woods surrounding his castle Nový Hrad at Kunratice (today a part of Prague), leaving the country in a deep political crisis. His death was followed by almost two decades of conflict called the Hussite Wars, which were centred on greater calls for religious reform by Jan Hus and spurred by popular outrage provoked from his martyrdom.