Christianity in the Ottoman Empire

From Infogalactic: the planetary knowledge core
(Redirected from Christianity and Judaism in the Ottoman Empire)
Jump to: navigation, search

Under the Ottoman Empire, Christians and Jews were, in principle, tolerated, but polytheists were not, in accordance with Sharia law. In practice, the degree of tolerance varied by time and place.

Orthodox Christians were the largest non-Muslim group. With the rise of Imperial Russia, they came to have an external advocate.[1]

Forced conversion of those raised by a non-Muslim father is counter to Sharia law, and was not a standard practice.

Ottoman religious tolerance was notable for being a bit better than that which existed elsewhere in other great past or contemporary empires, such as Spain or England. By the Byzantine Empire, apart from during the time of Theodosius, generally did not condemn other religious groups either, there being a mosque built in Constantinople, a Latin Quarter filled with Roman Catholic Churches and even a synagogue. Of course, there were isolated instances of gaps between established policy and its actual practical application, but still, it was the mode of operation of the Empire.[2] Lewis and Cohen point out that until relatively modern times, tolerance in the treatment of non-believers, at least as it is understood in the West after John Locke, was neither valued, nor its absence condemned by both Muslims and Christians.[3]

Under Ottoman rule, dhimmis (non-Muslim subjects) were allowed to "practice their religion, subject to certain conditions, and to enjoy a measure of communal autonomy" (see: Millet) and guaranteed their personal safety and security of property.[4] While recognizing the inferior status of dhimmis under Islamic rule, Bernard Lewis, Professor Emeritus of Near Eastern Studies at Princeton University, states that, in most respects, their position was "very much easier than that of non-Christians or even of heretical Christians in medieval (Catholic) Europe."[5] For example, dhimmis rarely faced martyrdom or exile, or forced compulsion to change their religion, and with certain exceptions, they were free in their choice of residence and profession.[6] But they could not have high up positions like the Muslims, and received smaller pay.

Negative attitudes towards dhimmis harbored by the Ottoman governors were partly due to the "normal" feelings of a dominant group towards subject groups, to the contempt Muslims had for those whom they perceived to have willfully chosen to refuse to accept the truth and convert to Islam, and to certain specific prejudices and humiliations. The negative attitudes, however, rarely had any ethnic or racial components.[7]

In the early years, the Ottoman Empire decreed that people of different millets should wear specific colors of, for instance, turbans and shoes — a policy that was not, however, always followed by Ottoman citizens.[8]

Religion as an Ottoman institution 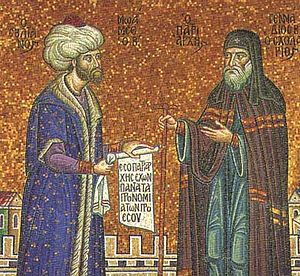 The Ottoman Empire constantly formulated policies balancing its religious problems. The Ottomans recognized the concept of clergy and its associated extension of religion as an institution. They brought established policies (regulations) over religious institutions through the idea of "legally valid" organizations.[clarification needed] But all had to accept Islam as dominant, and could not criticize Islam or the Sultan. This could be punishable by death.

The state's relationship with the Greek Orthodox Church was mixed, since the Orthodox were not generally killed, but they were encouraged through bribes to convert to Islam and they could not proselytize Muslims. The church's structure was kept intact and largely left alone (but under close control and scrutiny) until the Greek War of Independence of 1821–1831 and, later in the 19th and early 20th centuries, during the rise of the Ottoman constitutional monarchy, which was driven to some extent by nationalistic currents. But the Church was greatly affected by the corruption brought in by the Ottoman system of choosing the Patriarch of Constantinople, and putting up the position of Patriarch for bribes? Other churches, like the Bulgarian Orthodox Church, Serbian Orthodox Church and others were dissolved and placed under the jurisdiction of the Greek Orthodox Church. Churches had to be placed in inconspicuous areas, where the everyday populace would not see them.

Many Armenians and Greeks were killed during and after World War I.

Eventually, Capitulations of the Ottoman Empire (contracts with European powers) were negotiated, protecting the religious rights of Christians within the Empire. The Russians became formal protectors of the Eastern Orthodox groups in 1774, the French of the Catholics, and the British of the Jews and other groups[citation needed]. Russia and England competed for the Armenian people.[citation needed] They [Russia] perceived the establishment of over 100 American Protestant missionaries in Anatolia[citation needed] by World War I as weakening their own Eastern Orthodox teaching.[citation needed]

The Turks adopted a policy of giving Muslims more rights than Christians and Jews in order to encourage conversion. For example, only Muslim subjects were allowed to testify against Muslims in court.[9]

In the past, Christian missionaries sometimes worked hand-in-hand with colonialism, for example during the European colonization of the Americas, Africa and Asia. There is no record of a Muslim organization corresponding to the Christian mission system under the Ottoman Empire. According to Thomas Walker Arnold, Islam was not spread by force in the areas under the control of the Ottoman Sultan.[10] Rather, Arnold concludes by quoting a 17th-century author:

Meanwhile he (the Turk) wins (converts) by craft more than by force, and snatches away Christ by fraud out of the hearts of men. For the Turk, it is true, at the present time compels no country by violence to apostatise; but he uses other means whereby imperceptibly he roots out Christianity...[10]

We find that many Greeks of high talent and moral character were so sensible of the superiority of the Mohammedans, that even when they escaped being drafted into the Sultan's household as tribute children, they voluntarily embraced the faith of Mahomet. The moral superiority of the Ottoman society must be allowed to have had as much weight in causing these conversions, which were numerous in the 15th century, as the personal ambition of individuals.[10]

Voluntary conversion to Islam was welcomed by the Ottoman authorities. If a Christian became a Muslim, he or she lived under the same rules and regulations that applied to other Muslims; there were no special ones for converts.

However, conversion from Islam to Christianity was, around the 15th and the 16th centuries, sometimes punished by death.[11]

The Ottomans tolerated Protestant missionaries within their realm, so long as they limited their proselytising to the Orthodox Christians.[12]

Religion and the legal system

The main idea behind the Ottoman legal system was the "confessional community". The Ottomans tried to leave the choice of religion to the individual rather than imposing forced classifications. However, there were grey areas.

Ottoman practice assumed that law would be applied based on the religious beliefs of its citizens. However, the Ottoman Empire was organized around a system of local jurisprudence. Legal administration fit into a larger schema balancing central and local authority.[13] The jurisdictional complexity of the Ottoman Empire aimed to facilitate the integration of culturally and religiously different groups.[13]

There were three court systems: one for Muslims, another for non-Muslims (dhimmis), involving appointed Jews and Christians ruling over their respective religious communities, and the "trade court". Dhimmis were allowed to operate their own courts following their own legal systems in cases that did not involve other religious groups, capital offences, or threats to public order. Christians were liable in a non-Christian court in specific, clearly defined instances, for example the assassination of a Muslim or to resolve a trade dispute.

However, in the Ottoman Empire of the 18th and 19th centuries, dhimmis frequently used the Muslim courts not only when their attendance was compulsory (for example in cases brought against them by Muslims), but also in order to record property and business transactions within their own communities. Cases were brought against Muslims, against other dhimmis and even against members of the dhimmi’s own family. Dhimmis often took cases relating to marriage, divorce and inheritance to Muslim courts so that they would be decided under shari'a law. Oaths sworn by dhimmis in the Muslim courts were sometimes the same as the oaths taken by Muslims, sometimes tailored to the dhimmis’ beliefs.[14] Some Christian sources points that although Christians were not Muslims, there were instances which they were subjected to shari'a law.[15] According to some western sources, "the testimony of a Christian was not considered as valid in the Muslim court as much as the testimony of a Muslim". In a Muslim court, a Christian witness had a problem of building trust; a Christian who took a "Muslim oath" over the Koran ("God is Allah and there is no other God"), committed perjury.

Since the only legally valid Orthodox organization of the Ottoman Empire was the Ecumenical Patriarchate, inheritance of family property from father to son was usually considered invalid.[clarification needed]

All millets of the Empire had the right to open and run their own schools, teaching in their own languages.

Beginning with Murad I in the 14th century and extending through the 17th century, the Ottoman Empire employed devşirme (دوشيرم), a policy of providing young Christian boys education and an eventual career, either in the Janissary military corps or the Ottoman administrative system. The most promising students were enrolled in the Enderun School, whose graduates would fill the higher positions. Most of the children collected were from the Empire's Balkan territories, where the devşirme system was referred to as the "blood tax". When the children ended up becoming Islamic due to the milieu in which they were raised, any children that they had were considered to be free Muslims.[16]

Taxation from the perspective of dhimmis was "a concrete continuation of the taxes paid to earlier regimes"[17] (but now lower under the Muslim rule[18][19][20]) and from the point of view of the Muslim conqueror was a material proof of the dhimmis' subjection.[17]

The Ottoman Empire regulated how its cities would be built (quality assurances) and how the architecture (structural integrity, social needs, etc.) would be shaped.

Prior to the Tanzimat (a period of reformation beginning in 1839), special restrictions were imposed concerning the construction, renovation, size and the bells in Orthodox churches. For example, an Orthodox church's bell tower had to be slightly shorter than the minaret of the largest mosque in the same city. Hagia Photini in İzmir was a notable exception, as its bell tower was the tallest landmark of the city by far. They also must not exceed in grandeur or elegance. Only some churches were allowed to be built, but this was considered suspect, and some churches even fell into disrepair.

The majority of churches were destroyed or converted over time by the Ottoman Empire. Some others - notably the Hagia Sophia, Chora Church, Rotonda, and Hagios Demetrios - were converted into mosques (this was the majority). Indeed, Chora Church is the only church left with most of its mosaics still intact. Most of the churches in Turkey date now from the 19th century or 18th, like the small Patriarchate of Constantinople. Only Mary of the Mongols has continued to be a church. Many of the relics, icons, bells, etc, from the Byzantine Empire have been lost forever.