Military of the Ottoman Empire

The earliest form of the Ottoman military was a steppe-nomadic cavalry force.[1] This was centralized by Osman I from Turkoman tribesmen inhabiting western Anatolia in the late 13th century.

These horsemen became an irregular force of raiders used as shock troops, armed with simple weapons like bows and spears. They were given fiefs called timars in the conquered lands, and were later called timariots. In addition they acquired wealth during campaigns.

Orhan I organized a standing army paid by salary rather than booty or fiefs. The infantry were called yayas and the cavalry was known as müsellems. The force was made up by foreign mercenaries for the most part, and only a few Turks were content to accept salaries in place of timars. Foreign mercenaries were not required to convert to Islam as long as they obeyed their Ottoman commanders.

The Ottomans began using guns sometime at the 15th century. Following that, other troop types began to appear, such as the regular musketeers (Piyade Topçu, literally "foot artillery"); regular cavalry armed with firearms (Süvari Topçu Neferi, literally "mounted artillery soldier"), similar to the later European reiter or carabinier; and bombardiers (Humbaracı), consisting of grenadiers who threw explosives called khımbara and the soldiers who served the artillery with maintenance and powder supplies.

Ottoman Classical Army was the military structure established by Mehmed II, during his reorganization of the state and the military efforts. This is the major reorganization following Orhan I which organized a standing army paid by salary rather than booty or fiefs. This army was the force during rise of the Ottoman Empire. The organization was twofold, central (Kapu Kulu) and peripheral (Eyalet). Following a century long reform efforts, this Army was forced to disbandment by Sultan Mahmud II on 15 June 1826 by what is known as Auspicious Incident.

The main theme of this period is reforming the Janissaries. Western military people were imported as advisors but their abilities to enact change on the Classic Army were limited.

Ottoman Empire made numerous efforts to recruit French experts for its modernization. The French officer and adventurer Claude-Alexandre de Bonneval (1675–1747) went in the service of Sultan Mahmud I, converted to Islam, and endeavoured to modernize the Ottoman army, creating cannon foundries, powder and musket factories and a military engineering school.[2] Another officer François Baron de Tott was involved in the reform efforts for the Ottoman military. He succeeded in having a new foundry built to make howitzers, and was instrumental in the creation of mobile artillery units. He built fortifications on the Bosphorus and started a naval science course that laid the foundation stone for the later Turkish Naval Academy.[3]

One example of an advisor who achieved limited success was the François Baron de Tott, a French officer. He did succeed in having a new foundry built to make artillery. As well he directed the construction of a new naval base. Unfortunately it was almost impossible for him to divert soldiers from the regular army into the new units. The new ships and guns that made it into service were too few to have much of an influence on the Ottoman army and de Tott returned home.

When they had requested French help, a young artillery officer by the name of Napoleon Bonaparte was to be sent to Constantinople in 1795 to help organize Ottoman artillery. He did not go, for just days before he was to embark for the Near East he proved himself useful to the Directory by putting down a Parisian mob at 13 Vendémiaire and was kept in France.[4][5]

The main theme of this period is disbanding the Janissary, happened in 1826, and changing the military culture. The major event is "Vaka-ı Hayriye' translates as Auspicious Incident. The military units formed used in Crimean War, Russo-Turkish War (1877–1878), and Greco-Turkish War (1897).

The failed efforts of a new system dates before 1826. Sultan Selim III formed the Nizam-ı Cedid army (Nizam-ı Cedid meaning New Order) in the late 18th century and early 19th century. This was the first serious attempt to transform the Ottoman military forces into a modern army. However, the Nizam-ı Cedid was short lived, dissolving after the abdication of Selim III in 1807.

Sultan Mahmud II, Selim III's successor and nephew, who was a great reformer, disbanded the Janissaries in 1826 with so-called known as "Vaka-ı Hayriye" (the good incident).

The main theme of this period is organizing and training the newly formed units. The change of French system to German system as the German military mission was most effective during the period. The military units formed used in the Balkan Wars and World War I.

The shift from Classical Army (1451–1606) took more than a century beginning from failed attempts of Selim III (1789) to a period of Ottoman military reforms (1826–1858) and finally Abdulhamid II. Abdulhamid II, as early as 1880 sought, and two years later secured, German assistance, which culminated in the appointment of Lt. Col. Kohler. However. Although the consensus that Abdulhamid favored the modernization of the Ottoman army and the professionalization of the officer was fairly general, it seems that he neglected the military during the last fifteen years of his reign, and he also cut down the military budget. The formation of Ottoman Modern Army was a slow process with ups and downs. 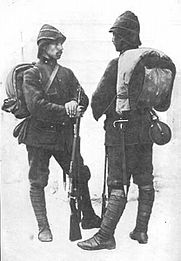 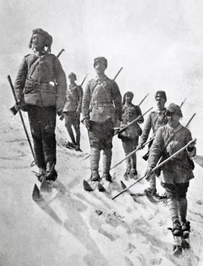 The Ottoman Navy, also known as the Ottoman Fleet, was established in the early 14th century after Empire first expanded to reach the sea in 1323 by capturing Karamürsel, the site of the first Ottoman naval shipyard and the nucleus of the future Navy. During its long existence, it was involved in many conflicts and signed a number of maritime treaties. At its height, the Navy extended to the Indian Ocean, sending an expedition to Indonesia in 1565.

For much of its history, the Navy was led by the position of the Kapudan Pasha (Grand Admiral; literally "Captain Pasha"). This position was abolished in 1867, when it was replaced by the Minister of the Navy (Turkish: Bahriye Nazırı) and a number of Fleet Commanders (Turkish: Donanma Komutanları).

After the demise of Ottoman Empire, the Navy's tradition was continued under the Turkish Naval Forces of the Republic of Turkey in 1923.

Silhouettes of the warships of the Ottoman Navy, as projected for 1914

In 1389 a system of conscription was introduced in the Ottoman military. In times of need every town, quarter, and village should present a fully equipped conscript at the recruiting office. The new force of irregular infantrymen was called Azabs and it was used in a number of different ways. They supported the supplies to the front-line, they dug roads and built bridges. On rare occasions they were used as cannon fodder to slow down enemy advance. A branch of the Azabs were the bashi-bazouk (başıbozuk). These were specialized in close combat and were sometimes mounted. They became notorious for being brutal and indisciplined and were recruited from homeless, vagrants and criminals.[8]

Ottoman Military College was a two-year military staff college of the Ottoman Empire. Its mission was to educate staff officers for the Ottoman Army.

The Academy was formed in 1834 by Marshal Ahmed Fevzi Pasha together with Mehmed Namık Pasha, as the Mekteb-i Harbiye (Ottoman Turkish: lit. "War School"), and the first class of officers graduated in 1841. Its formation was a part of military reforms within the Ottoman Empire as it recognized the need for more educated officers to modernize its army. The need for a new military order was part of Sultan Mahmud II's reforms, continued by his son Abdülmecit I.

The roots of the Naval Academy goes back to 1773, when a naval school under the name of "Naval Engineering at Golden Horn Naval Shipyard" was founded during the reign of Sultan Mustafa III on the command of Grand Vizier and Admiral Cezayirli Gazi Hasan Pasha. François Baron de Tott, a French officer and advisor to the Ottoman military, was appointed for the establishment of a course to provide education on plane geometry and navigation. The course, attended also by civilian captains of the merchant marine, was given on board of a galleon anchored at Kasimpaşa in Istanbul and lasted three months. The temporary course turned into a continuous education on land with the establishment of "Naval Mathematical College" in February 1776. With growing number of cadets, the college building at the naval shipyard was extended. On October 22, 1784, the college, renamed the "Imperial Naval Engineering School" (Ottoman Turkish: Mühendishâne-i Bahrî-i Hümâyûn‎), started its education for three years in the new building. From 1795 on, the training was divided into navigation and cartography for officers of the deck, and naval architecture and shipbuilding for naval engineers. In 1838, the naval school moved into its new building in Kasımpaşa. With the beginning of the reformation efforts, the school was renamed to "Naval School" (Ottoman Turkish: Mekteb-i Bahriye‎) and continued to serve in Kasımpaşa for 12 years. Then, it was relocated 1850 to Heybeliada for the last time. During the Second Constitutional Era, an upgraded education system was adapted in 1909 from the Royal Naval Academy.

The Category:Military awards and decorations of the Ottoman Empire collects the individual wards and decorations. The Ottoman War Medal, better known as the Gallipoli Star, was instituted by the Sultan Mehmed Reshad V on 1 March 1915 for gallantry in battle. The Iftikhar Sanayi Medal was first granted by Sultan Abdulhamid II. Order of the Medjidie was instituted in 1851 by Sultan Abdülmecid I. The Order of Osmanieh was created in January 1862 by Sultan Abdulaziz. This became the second highest order with the obsolescence of the Nişan-i Iftikhar. Order of Osmanieh ranking below the Nişan-i Imtiyaz.