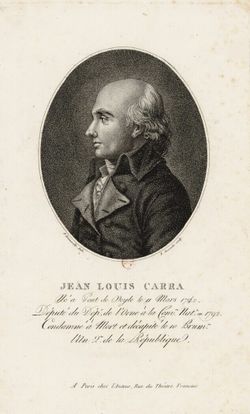 He was born at Pont-de-Veyle in the Ain department, the son of a commissioner in seigniorial rights. Carra was imprisoned while still at college in Mâcon, accused for a theft of ribbons. In 1768–1769, he was secretary to the Marquis d'Argenson. There followed a period of wanderings in Switzerland and England, where he was imprisoned for debts, in Russia and in the Moldavia of Prince Grigore Ghica. In 1776, after a stay in Warsaw, he returned to France. In 1784, thanks to the protection of Baron de Breteuil, he entered the King's Library.

During the Revolution, he was noticed early on for his contributions to the Annales patriotiques et littéraires. Active in the Jacobin club and in the Society of the Friends of the Blacks, he was appointed, jointly with Chamfort, to the head of the National Library on August 19, 1792.

The Annales patriotiques had a prodigious success; they were in all the clubs. In the villages, each popular society had its Carra. All that was said in these turbulent associations was picked up by this sheet, which spread all this from one end of France to the other.

As early as December 29, 1790, Carra appeared on the rostrum of the Jacobin club, formally declared war on Emperor Leopold, and added that, in order to raise all the peoples of Germany, he asked only for 50,000 men, 12 presses, printers and paper, but then, even in this club, no one thought of war, and Mirabeau had him covered with boos.

On September 8, 1792, he presented himself at the bar of the legislative body, and had a gold snuffbox placed on the desk, which he said had been given to him by the king of Prussia, in recognition of a work he had dedicated to him, and asked that this gold be used to fight the sovereign who had given it to him: he ended by tearing up the signature of the letter that the king had sent him. However, several people claimed that, in spite of all these protestations of a republicanism which knew neither respect nor sparingness, Carra was the agent of a party which wanted to put the Duke of Brunswick on the throne of France.

This suspicion made a fortune with Robespierre, who designated him as a traitor, although, in all circumstances, he had been one of his most useful servants. Carra was one of the principal promoters of the attack on the Tuileries, on August 10, and boasted of it in his paper. He accused General Montesquiou, commander in Savoy, and was sent to the Camp de Châlons, from where he announced the retreat of the Prussians.

Carra was elected deputy to the National Convention by the departments of Eure and Saône-et-Loire: he accepted the nomination of the latter while he was replaced in the former by Louis-Jacques Savary. In the trial of Louis XVI, he was one of the first to speak out against the appeal to the people. Besides, he did not make himself noticed in this assembly, and reserved all his means for his newspaper.

It was in this paper that, from the first months of 1792, he insisted that the populace be armed with pikes to oppose the national guard, composed solely of the burghers of each town, and he repeated this so often that finally his wishes were granted. This measure disorganized the public force that supported the weak constitution. The national guard, especially in Paris, was very well dressed and was proud to appear only in the most brilliant military costume. As soon as the pikes appeared, most of the companies did not want to be confused with the mob of pikemen, who from then on were called "sans-culottes", and stopped serving.

Rejected from Robespierre's party, Carra joined the party of the Brissotins, and was appointed, under the ministry of Roland, guard of the National Library. Soon the denunciations multiplied against him. Marat, Couthon and Robespierre had him recalled from a mission in Blois on June 12, 1793. Proscribed following the events of May 31, he was condemned to death on October 30 by the Revolutionary Tribunal of Paris, and beheaded the next day, with the 21 Girondin deputies.