Saône-et-Loire (French pronunciation: ​[soː.n‿e.lwaʁ]; Arpitan: Sona-et-Lêre) is a French department, named after the Saône and the Loire rivers between which it lies.

When it was formed during the French Revolution, as of March 4, 1790 in fulfillment of the law of December 22, 1789, the new department combined parts of the provinces of southern Burgundy and Bresse, uniting lands that had no previous common history nor political unity and which have no true geographical unity. Thus its history is that of Burgundy, and is especially to be found in the local histories of Autun, Mâcon, Chalon-sur-Saône, Charolles and Louhans.

Saône-et-Loire is the seventh largest department of France. It is part of the region Bourgogne-Franche-Comté. In the west, the department is composed of the hills of the Autunois, the region around Autun, in the southwest the Charollais, and the Mâconnais in the south.

In the centre, the department is traversed from north to south by the Saône in its wide plain; the Saône is a tributary of the River Rhône that joins it at Lyon and thus is connected to the Mediterranean Sea. The source of the Loire, is south of the department, in the department of Ardèche. It then makes its way in the opposite direction, forming the southwest border of the department, and eventually draining into the Atlantic Ocean. The Canal du Centre links the Saône to the Loire between Chalon-sur-Saône and Digoin, thereby linking the Mediterranean Sea to the Atlantic ocean. In the east, the department occupies the northern part of the plain of Bresse. In the west, its industrial heart is in Le Creusot and Montceau-les-Mines, formerly noted for their coal mines and metallurgy.

The department consists of five arrondissements:

There are 29 cantons in the department and 573 communes. 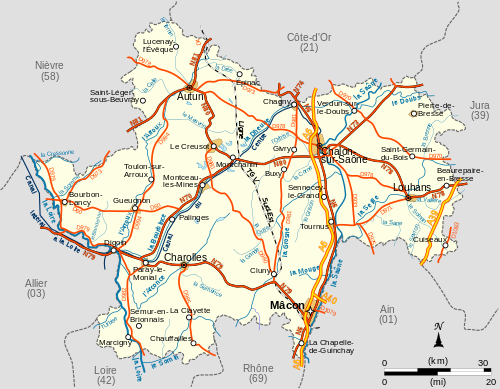