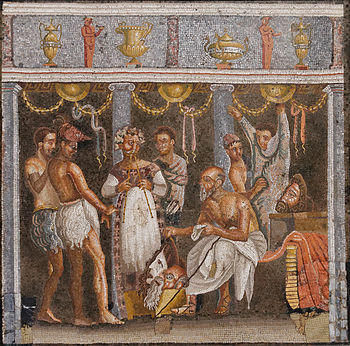 Theatre of ancient Rome refers to the time period of theatrical practice and performance in Rome beginning in the 4th century B.C., following the state’s transition from Monarchy to Republic.[1] Theater of the era is generally separated into the genres of tragedy and comedy. Some works by Plautus, Terence, and Seneca survive to this day.

Rome was founded in 753 B.C.E as a monarchy under Etruscan rule, and remained as such throughout the first two and a half centuries of its existence. Following the expulsion of Rome's last king, Lucius Tarquinius Superbus, or "Tarquin the Proud," circa 509 B.C.E., Rome became a Republic, and was henceforth led by a group of magistrates elected by the Roman people. It is believed that Roman theatre was born during the first two centuries of the Roman Republic, following the spread of Roman rule into a large area of the Italian peninsula, circa 364 B.C.E.

Following the devastation of widespread plague in 364 B.C.E, Roman citizens began including theatrical games as a supplement to the Lectisternium ceremonies already being performed, in a stronger effort to pacify the gods. In the years following the establishment of these practices, actors began adapting these dances and games into performances by acting out texts set to music and simultaneous movement.

As the era of the Roman Republic progressed, citizens began including professionally performed drama in the eclectic offerings of the ludi (celebrations of public holidays) held throughout each year—the largest of these festivals being the Ludi Romani, held each September in honor of the Roman god Jupiter.[2] It was as a part of the Ludi Romani in 240 B.C.E. that author and playwright Livius Adronicus became the first to produce translations of Greek plays to be performed on the Roman stage.[1][3][4]

The first important works of Roman literature were the tragedies and comedies written by Livius Andronicus beginning in 240 BC. Five years later, Gnaeus Naevius, a younger contemporary of Andronicus, also began to write drama, composing in both genres as well. No plays from either writer have survived. By the beginning of the 2nd century BC, drama had become firmly established in Rome and a guild of writers (collegium poetarum) had been formed.[5]

No early Roman tragedy survives, though it was highly regarded in its day; historians know of three early tragedians—Quintus Ennius, Marcus Pacuvius and Lucius Accius.

From the time of the empire, however, the work of two tragedians survives—one is an unknown author, while the other is the Stoic philosopher Seneca. Nine of Seneca's tragedies survive, all of which are fabulae crepidatae (tragedies adapted from Greek originals); his Phaedra, for example, was based on Euripides' Hippolytus. Seneca is well known for composing works which feature a heavy presence of violence and horror. Though there is no definite evidence of this, the possibility exists that Seneca intended his plays to be recited within small, private groups, and not for public consumption onstage.

Seneca appears as a character in the tragedy Octavia, the only extant example of fabula praetexta (tragedies based on Roman subjects, first created by Naevius), and as a result, the play was mistakenly attributed as having been authored by Seneca himself. However, though historians have since confirmed that the play was not one of Seneca's works, the true author remains unknown.[5]

All Roman comedies that have survived can be categorized as fabula palliata (comedies based on Greek subjects) and were written by two dramatists: Titus Maccius Plautus (Plautus) and Publius Terentius Afer (Terence). No fabula togata (Roman comedy in a Roman setting) has survived.

In adapting Greek plays to be performed for Roman audiences, the Roman comic dramatists made several changes to the structure of the productions. Most notable is the removal of the previously prominent role of the chorus as a means of separating the action into distinct episodes. Additionally, musical accompaniment was added as a simultaneous supplement to the plays' dialogue. The action of all scenes typically took place in the streets outside the dwelling of the main characters, and plot complications were often a result of eavesdropping by a minor character.

Plautus wrote between 205 and 184 B.C. and twenty of his comedies survive to present day, of which his farces are best known. He was admired for the wit of his dialogue and for his varied use of poetic meters. As a result of the growing popularity of Plautus' plays, as well as this new form of written comedy, scenic plays became a more prominent component in Roman festivals of the time, claiming their place in events which had previously only featured races, athletic competitions, and gladiatorial battles.

All six of the comedies that Terence composed between 166 and 160 BC have survived. The complexity of his plots, in which he routinely combined several Greek originals into one production, brought about heavy criticism, including claims that in doing so, he was ruining the original Greek plays, as well as rumors that he had received assistance from high ranking men in composing his material. In fact, these rumors prompted Terence to use the prologues in several of his plays as an opportunity to plead with audiences, asking that they lend an objective eye and ear to his material, and not be swayed by what they may have heard about his practices. This was a stark difference from the written prologues of other known playwrights of the period, who routinely utilized their prologues as a way of prefacing the plot of the play being performed.[6] [5] 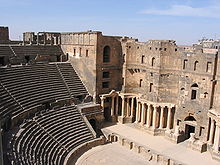 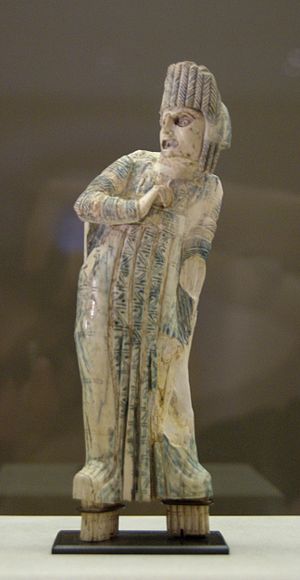 An ivory statuette of a Roman actor of tragedy, 1st century.

The following are examples of stock characters in Roman comedy:

Beginning with the first presentation of theatre in Rome in 240 B.C., plays were often presented during public festivals. Since these plays were less popular than the several other types of events (gladiatorial matches, circus events, etc.) held within the same space, theatrical events were performed using temporary wooden structures, which had to be displaced and dismantled for days at a time, whenever other spectacle events were scheduled to take place. The slow process of creating a permanent performance space was due to the staunch objection of high-ranking officials: it was the opinion of the members of the senate that citizens were spending too much time at theatrical events, and that condoning this behavior would lead to corruption of the Roman public. As a result, no permanent stone structure was constructed for the purpose of theatrical performance until 55 B.C.

During the time of these temporary structures, theatrical performances featured a very minimalist atmosphere. This included space for spectators to stand or sit to watch the play, known as a cavea, and a stage, or scaena. The setting for each play was depicted using an elaborate backdrop (scaenae frons), and the actors performed on the stage, in the playing space in front of the scaenae frons, called the proscaenium. These structures were erected in several different places, including temples, arenas, and at times, plays were held in Rome’s central square (the forum).[6][1]

In 55 B.C., the first permanent theatre was constructed. Built by Pompey the Great, the main purpose of this structure was actually not for the performance of drama, but rather, to allow current and future rulers a venue with which they could assemble the public and demonstrate their pomp and authority over the masses. With seating for 20,000 audience members, the grandiose structure held a 300 foot-wide stage, and boasted a three-story scaenae frons flanked with elaborate statues. The Theatre of Pompei is still in existence today.[6][2] 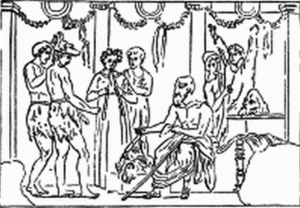 Though the possibility exists that women may have performed non-speaking roles in Roman theatrical performances, the overwhelming majority of historical evidence dictates that male actors portrayed all speaking roles. The public opinion of actors was very low, placing them within the same social status as criminals and prostitutes, and acting as a profession was considered illegitimate and repulsive. Many Roman actors were slaves, and it was not unusual for a performer to be beaten by his master as punishment for an unsatisfactory performance. These actions and opinions differ greatly from those demonstrated during the time of ancient Greek theatre, a time when actors were regarded as respected professionals, and were granted citizenship in Athens.[7][1]

File:Seneca-Cordoba.jpg
A sculpture of Lucius Annaeus Seneca, by Puerta de Almodóvar in Córdoba.