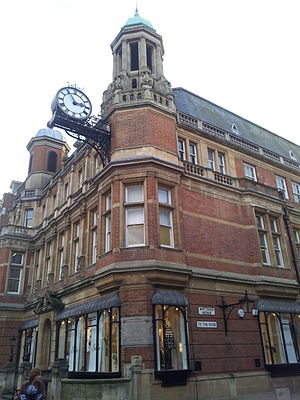 The borough was created in 1890 under a Royal Charter, covering the civil (also covering the ecclesiastical) parish of Richmond St Mary Magdalene.[2] This soon expanded with consent from Surrey County Council in 1892 to cover the parishes of Kew, Petersham and most of Mortlake.[1]

Under the Local Government Act 1894, the Mortlake civil parish was split, with the majority covering 1,554 acres (629 ha) outside the borough becoming the west of the Barnes Urban District and the rest (329 acres (133 ha)) remaining and forming a new North Sheen civil parish.

In 1933 the borough was the main recipient of the land and main settlement in the defunct Ham Urban District, which had been an urban district since 1894.[1]

The borough was abolished in 1965 when it was replaced by the larger London Borough of Richmond upon Thames, and Surrey County Council was replaced here by Greater London local government institutions, at which time the ceremonial county also changed.[1]

The coat of arms of the borough was granted on 19 June 1891. The arms is per fess gules and azure on a fess ermine between in chief a lion passant guardant between two portcullises or and in base a swan argent upon water proper; a representation of the ancient Palace of Richmond proper between two roses gules barbed and seeded proper.

The crest was a stag regardant proper, holding in its mouth two roses on one stem, one argent, the other gules, and supporting with the dexter fore hoof a shield or a wreath vert.[3]

The portcullises, roses and lion were all associated with King Henry VII, who brought the rival houses of Lancaster and York together and helped build the palace. The swan represented the River Thames. The stag represented Richmond Park and Old Deer Park, and the wreath the idea of municipality.[3]