Collectively the Auxiliary contributes over 4.5 million hours of service each year and completed nearly 500,000 missions in service to support the Coast Guard.[3] Every year Auxiliarists help to save approximately 500 lives, assist 15,000 distressed boaters, conduct over 150,000 safety examinations of recreational vessels, and provide boater safety instruction to over 500,000 students. In total the Coast Guard Auxiliary saves taxpayers hundreds of millions of dollars each year.[4] 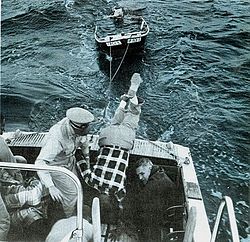 The United States Coast Guard Auxiliary in 1967 rescue a boater off an outboard that had foundered during a storm in Long Island Sound, New York.

The development of the single-operator motorboat, and later the outboard engine, during the early 20th century increased the number of recreational boaters operating on federal waters. By 1939 there were more than 300,000 personal watercraft in operation.[5] The previous year the Coast Guard had received 14,000 calls for assistance and had responded to 8,600 "in-peril" cases. On June 23, 1939, the U.S. Congress enacted legislation that established the Coast Guard Reserve, the volunteer civilian component of the Coast Guard, to promote boating safety and to facilitate the operations of the Coast Guard.[5] Boat Owners organized into flotillas within Coast Guard districts around the United States. These volunteers conducted safety and security patrols and helped enforce the 1940 Federal Boating and Espionage Acts. In February 1941, congress created the United States Coast Guard Reserve and renamed the volunteer reserve as the United States Coast Guard Auxiliary.[5]

Beginning in 1942, in response to the growing German U-Boat threat to the United States, the U.S. Navy ordered the acquisition of the "maximum practical number of civilian craft in any way capable of going to sea in good weather for a period of at least 48 hours." A large number of vessels, owned and piloted by Auxiliarists with crews made-up of Coast Guard Reservists, made-up the bulk of the American coastal anti-submarine warfare capability during the early months of World War II. As newly-constructed warships took over the load, the Coast Guard abandoned the concept. None of the two thousand civilian craft, armed with depth charges stowed awkwardly on their decks, ever sank a submarine, though they did rescue several hundred survivors of torpedoed merchant ships.

Early in 1973, budget cuts forced the closing of seven Coast Guard stations on the Great Lakes. At the request of the affected communities, Congress ordered the stations to be re-opened and operated by the Auxiliary. The local division captains took responsibility for manning them and ensuring that Auxiliarists' boats were always available to assist distressed vessels. The Auxiliary later took over seven more stations on the Mississippi and Ohio Rivers.

In 1976 the Coast Guard commissioned a study of the Auxiliary by a private research firm, University Sciences Forum of Washington. After interviewing key personnel in the Coast Guard and the Auxiliary and analyzing questionnaires filled out by about two thousand Auxiliarists, the researchers concluded that that Auxiliary was in good health. "In summary," they wrote, "we consider the Auxiliary the greatest economical resource readily available to the COGARD. It performs in an outstanding manner and its personnel are among the most professional group of volunteers in the nation."

Under legislation passed in 1996, the Auxiliary's role was expanded to allow members to assist in any Coast Guard mission, except direct law enforcement and military operations. As of 2004, the Coast Guard Auxiliary had 35,000 members who collectively provided 2 million man hours of service annually.[6] 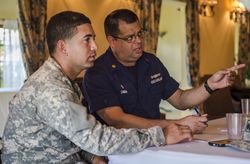 A U.S. Coast Guard auxiliarist (right) provides English-to-Spanish translation for a member of the Dominican Republic coast guard during Tradewinds 2013, a U.S.-led multinational military exercise in the Caribbean basin.

The following is a list of the various programs/activities in which Auxiliarists are currently authorized to participate.[9] 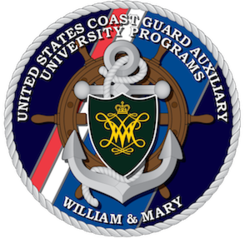 The Auxiliary University Programs (AUP) is a Coast Guard Auxiliary-managed initiative established in 2007. Today AUP now has nearly 200 students in 20 units representing over 30 colleges and universities across the United States.[10] AUP prepares undergraduate and graduate students for future public service inside and outside of the Coast Guard Auxiliary. AUP provides opportunities for students to gain boating education, to learn about homeland security, and to gain operational and leadership experience.[11]

The Coast Guard, which has just one regular military band, relies on Auxiliarist musicians for ship christenings, funerals, and change-of-command ceremonies. In addition, the U.S. Coast Guard Pipe Band is formed from both Coast Guard Reserve and Coast Guard Auxiliary members. 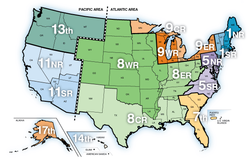 The U.S. Coast Guard Auxiliary is divided into three geographic areas: Pacific, Atlantic West, and Atlantic East. The three areas are subdivided into district and divisions, with the smallest unit of organization being the flotilla (not represented on this map).

The Auxiliary has units in all 50 states, Puerto Rico, the Virgin Islands, American Samoa, and Guam. Under the direct authority of the U.S. Department of Homeland Security via the Commandant of the U.S. Coast Guard, the Auxiliary's internally operating levels are broken down into four organizational levels: Flotilla, Division, District and National.[15]

As a civilian organization, the Auxiliary does not have a military-style chain of command. There are, however, two chains of leadership and management. Auxiliarists are expected to adhere to the relevant chain when communicating. There is an elected leader chain and an appointed leader chain (known as "parallel staffing"). Commanders and vice commanders (deputies) of each flotilla, division and district are elected annually. The national leadership is elected once every two years. Other staff officers are appointed based on skills and level of interest. However, the Auxiliary, because of its close work with the other components of the Coast Guard, inherited the meme of staff officer abbreviations, and these are used extensively in internal documents and reports. All leadership positions in the Auxiliary require membership in a Flotilla of the Auxiliary. 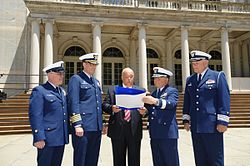 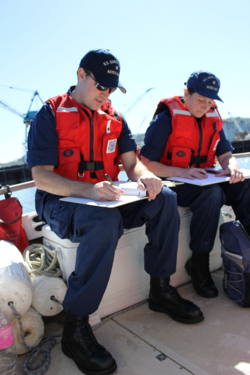 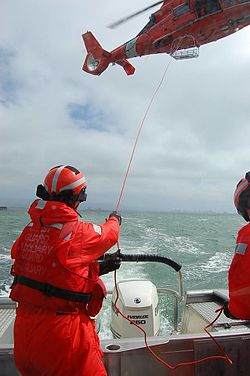 National officer positions include the following:

Titles and duties of flotilla officers are dictated by the Auxiliary Manual.[23]

The list of staff officers, with their official abbreviations, is:

Auxiliarists are expected to wear a uniform intended for the situation and mission.[24] Each auxiliary uniform is identical to a Coast Guard officer's military uniform, with the exception that the buttons and stripes on dress jackets and shoulder boards are silver in color, rather than gold. On dress uniforms, appointed staff officers wear insignia with a red "A" and elected officers wear insignia with a blue "A", while black "A"s are worn on insignia by both elected and appointed officers on the ODU uniform. Auxiliarists are expected to adhere to the same rules of correct uniform wear as regular and reserve Coast Guard officers.

When augmenting Coast Guard personnel, the military-style insignia of Auxiliary position is generally removed and the organizational insignia is worn. 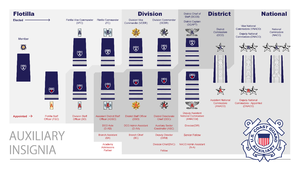 Auxiliarists are civilian auxiliary component who do not have military rank, but they do wear U.S. military style officer insignia that signify their office (e.g., a Flotilla Commander wears insignia similar to a USCG lieutenant, but is not referred to as "Lieutenant").[25] By using distinctive insignia, the Auxiliary identifies and recognizes the increasing responsibility and management capability of elected and appointed leaders and staff officers from lower to higher level. The title most commonly used in official correspondence and reports is "Auxiliarist", and its abbreviation (e.g., Auxiliarist John Smith or AUX J. Smith).[25] Exceptions to this rule are elected or appointed Commodores, who have reached flag positions similar to active and reserve rear admirals and vice admirals and who wear one to three stars depending on their office (e.g., District Commodore, Assistant National Commodore, Deputy National Commodore, or National Commodore); specifically, they may use the term Commodore, and are the only Auxiliarists who use a military style title ("Commodore") before their name,[25] sometimes abbreviated COMO accordingly (e.g., Commodore James A. Smith, National Commodore; or COMO Jim Smith, (NACO)).[26]

Auxiliarists do not normally render military courtesies (such as saluting) to another Auxiliarist, but an Auxiliarist in uniform is expected to initiate salutes to the U.S. national ensign and friendly foreign flags as well as military officers who are senior to the Auxiliarist's office. Auxiliarists are expected to return all salutes given.

Auxiliarists ascribe to the following pledge during induction:

The United States Coast Guard Auxiliary offers a number of benefits. Auxiliarists are allowed access to the Base Exchange when in proper uniform, and have opportunities for training, awards, and uniforms. In addition Auxiliarist operating under Coast Guard orders are covered under insurance, have access to the Coast Guard Federal Credit Union, and may access the Coast Guard Mutual Assistance Program.[29] After a favorable Personnel Security Investigation the Auxiliarist is issued an official identification cards after their security clearance is processed.[30] In addition, the Coast Guard Foundation provides resources to help Auxiliarists to pay for boater safety courses, vessel inspections, and marine environmental protection efforts.[31]

The Coast Guard Auxiliary requires Auxiliarists to take mandatory Incident Command System courses through FEMA's Emergency Management Institute (EMI). Failure to complete the training may make them ineligible to participate in Coast Guard Auxiliary exercises, drills, or response events.[32] Auxiliarists are expected to take EMI courses that will help them to understand the Incident Command System's organization, basic terminology and common responsibilities. They are required to acquire the skills necessary to perform in an ICS support role.[33] Officers, certified coxswains, pilots, or those in a leadership role may need to take additional EMI courses pertaining to the National Incident Management System and/or the National Response Framework.[34]