United States Navy ratings are general enlisted occupations that consist of specific skills and abilities. Each naval rating has its own specialty badge, which is worn on the left sleeve of the uniform by each enlisted person in that particular field. Working uniforms, such as camouflage Battle Dress Uniforms, utilities, coveralls, and Naval Working Uniform, bear generic rate designators that exclude the rating symbol.

Just as a naval officer has rank, not a rate, an officer's occupation (if drawn more narrowly than an officer of the line) is classified according to designators for both officers of the line (e.g., line officers) and those of the professional staff corps.[1]

Ratings should not be confused with rates, which describe the Navy's enlisted pay-grades and ratings. Enlisted sailors are referred to by their rating and pay-grade. For example, if someone's pay-grade is E-5 (Petty Officer 2nd Class) and his rating is Boatswain's Mate, then combining the two—Boatswain's Mate 2nd Class (BM2)—defines both pay-grade and rating in formal address or epistolary salutation. Thus, Boatswain's Mate 2nd Class (BM2) would be his rate.[2] A member that is E-1, E-2, or E-3 that belongs to a general occupational field (airman, constructionman, fireman, hospitalman, or seaman) is considered nonrated. A striker is a nonrated person who is working for promotion towards a specific rating. Example: BMSN, MMFA, AOAR. [2]

The U.S. Navy's enlisted occupational system is a product of more than 200 years of Naval evolution. The Navy of the United Colonies of the 1775 era offered only a few different jobs above the ordinary level of seaman. These included Boatswain's mate, Quartermaster, Gunner's mate, Master-at-arms, Cook, Armorer, and Coxswain. These were titles of the jobs that individuals were actually performing and became the basis for Petty officers and ratings. During this time, ship crews were taken from civilian life and enlisted for only one cruise, thus making the job at hand rather than career possibilities the primary consideration. It was not until 1841 that distinguishing marks for a rating were prescribed in the Regulations of the Secretary of the Navy and specialty marks were not added to enlisted men’s uniforms until 1866. The marks consisted of the tools or instruments used in each rating's specific duty. The Master-at-Arms, the police officer of a ship, wore the star of authority and the Gunner’s Mate wore two crossed cannons. Currently, all specialty marks for new ratings are approved by the Permanent Naval Uniform Board which is a division of the Bureau of Naval Personnel.[3]

As the Navy’s rating system has changed so has the Navy. The first steamship, mine, radar, torpedo, aircraft carrier, and many other “firsts” all established a new era in the Navy, and each directly impacted the enlisted occupation structure. During World War II, the Navy also briefly maintained a rating of Specialist, similar to the rank in the United States Army. The rating of Specialist was discontinued in 1948. 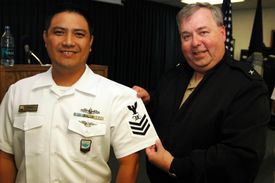 The pay grades E-4 (Petty Officer Third Class) through E-9 (Master Chief Petty Officer) fall within the rating structure. It is further broken down into four types of ratings and classifications:

Paygrades E1 through E3 can also have a rating abbreviation preceding their paygrade symbol if they are graduates of Class "A" schools; have received the rating designation in a previous enlistment; are assigned to a billet in that specialty as a striker; have passed an advancement examination and not been selected for advancement for reasons of numeric limitations on advancements; or have been reduced in rate because of punishment. Examples: BMSR is a Boatswain's Mate Seaman Recruit (paygrade E1); MMFA is a Machinist's Mate Fireman Apprentice (paygrade E2); MRFN is a Machinery Repairman Fireman (paygrade E3). HN is a Hospital Corpsman (paygrade E3).

I^ : The Navy has announced a merger of the DC, HT and MR ratings into Repair Technician (RT) is pending but has not announced a timeline.[16]
II^ : Prior to March 1 March 2014, IC and EM combine at paygrade E-9 to the rating of Master Chief Electrician's Mate (EMCM). After 1 March 2014, IC is moving to the Seaman ratings group.[17]

This article incorporates text in the public domain from the United States Navy.