Originally, the Coast Guard used the term cutter in its traditional sense, as a type of small sailing ship. Today it officially uses the term for any vessel which has a permanently assigned crew and accommodations for the extended support of that crew, and includes only and all vessels of 65-foot (20 m) or more in length.[1]

The Coast Guard formerly leased three 179-foot Cyclone-class coastal patrol ships from the U.S. Navy. All are homeported in Pascagoula, Mississippi. These vessels were used primarily for counterdrug patrols.[2][3][4] All have now been returned to the Navy.

Any Coast Guard crew with officers or petty officers assigned has law-enforcement authority (14 USC Sec. 89) and can conduct armed boardings. 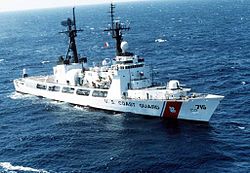 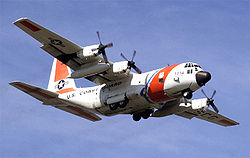 A USCG HC-130 Hercules near Oahu 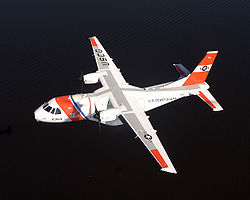 The Coast Guard is planning to purchase 36 CASA CN-235 from Spanish aircraft manufacturer Construcciones Aeronáuticas SA (CASA) for medium range search. As of 26 February 2008, 3 aircraft have been delivered for testing and integration with a further 5 planned.[12] During testing, one aircraft was pulled into active duty for the search of downed Air Force pilots, in which the aircraft demonstrated its capabilities.

The Coast Guard was to purchase the Bell Eagle Eye UAV as part of the Deepwater program, but this has been cancelled.[13] 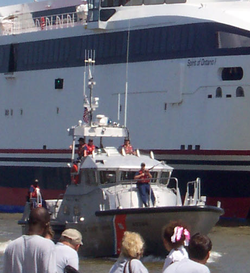 USCG 47-foot Motor Lifeboat escorting the Spirit of Ontario I Fast Ferry into the port of Rochester, New York on 2004-08-08 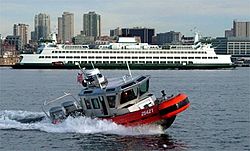 The Coast Guard planned to reduce the inventory of Boston Whalers because of the lack of interoperable spare parts. On Friday, July 13th, the General Services Administration approved the transfer of 10 Coast Guard boats to the Army in Iraq. The boats, 24-foot and 27-foot Boston Whalers with trailers, had an original acquisition cost of more than $800,000. The Army is looking for approximately 55 Riverine or Patrol style boats to conduct water interdiction, river denial and island clearance missions, troop transport and insertion on a regular basis; the Coast Guard is providing the Army with the Boston Whalers and one Ambar boat, a patrol type vessel.[17] 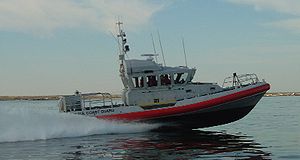 The current communication system is being replaced by Rescue 21. Rescue 21 is an advanced maritime command, control, and communications (C3) system.

The OMEGA navigation system and the LORAN-C transmitters outside the USA were run until 1994 also by the United States Coast Guard, and LORAN-C transmitters within the US were decommissioned on June 1, 2010, with the exception of 5 CONUS LORAN-C stations that continue to be manned due to international agreements.