From Infogalactic: the planetary knowledge core
Jump to: navigation, search
This article is about the ancient marketplace. For other uses, see Agora (disambiguation). 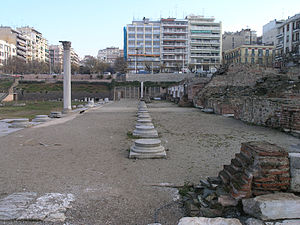 Stoa of the ancient agora of Thessaloniki 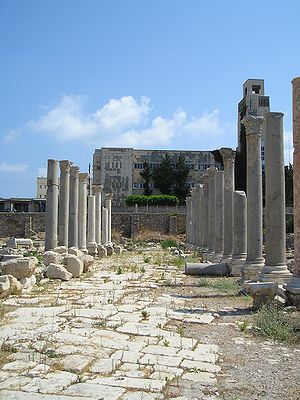 The Agora (/ˈæɡərə/; Ancient Greek: Ἀγορά Agorá) was a central spot in ancient Greek city-states. The literal meaning of the word is "gathering place" or "assembly". The agora was the center of athletic, artistic, spiritual and political life of the city.[1] The Ancient Agora of Athens was the best-known example.

Early in Greek history (18th century–8th century BC), free-born citizens would gather in the agora for military duty or to hear statements of the ruling king or council. Later, the agora also served as a marketplace where merchants kept stalls or shops to sell their goods amid colonnades.

From this twin function of the agora as a political and commercial space came the two Greek verbs ἀγοράζω, agorázō, "I shop", and ἀγορεύω, agoreúō, "I speak in public".

The term agoraphobia denotes a phobic condition in which the sufferer becomes anxious in environments that are unfamiliar—for instance, places where he or she perceives that they have little control. Such anxiety may be triggered by wide open spaces, by crowds, or by some public situations, and the psychological term derives from the agora as a large and open gathering place.