Knebworth is a village and civil parish in the north of Hertfordshire, England, immediately south of Stevenage. The civil parish covers an area between the villages of Datchworth, Woolmer Green, Codicote, Kimpton, Whitwell, St Paul's Walden and Langley, and encompasses the village of Knebworth, the small village of Old Knebworth and Knebworth House.

There is evidence of people living in the area as far back as Neolithic times and it is mentioned in the Domesday Book of 1086 where it is referred to as Chenepeworde (the farm belonging to the Dane, Cnebba) with a population of 150. The original village, now known as Old Knebworth, developed around Knebworth House. Development of the newer Knebworth village started in the late 19th century centred a mile to the east of Old Knebworth on the new railway station and the Great North Road (subsequently the A1, and now the B197 since the opening of the A1(M) motorway in 1962).

At the turn of the century the architect Edwin Lutyens built Homewood, southeast of Old Knebworth, as a dower house for Edith Bulwer-Lytton.[1] Her daughter, the suffragette Constance Lytton also lived there, until just before her death in 1923.[2]

Knebworth has, since 1974, been famously associated with numerous major open air rock and pop concerts at Knebworth House, including Queen's final live performance which took place on 9 August 1986 and drew an attendance estimated as high as 300,000; most famously Robbie Williams, who for three nights in August 2003 performed to the largest crowds ever assembled for a single performer. The effects of the gigs were well documented due to the 375,000 concert goers making their way to the usually quiet village, prompting local papers' front page headlines such as "The Disciples have arrived".[citation needed]

On 16 June 1990 the village was twinned with the commune of Châtelaillon-Plage in France.

Knebworth Park Cricket Club play at their ground in Knebworth Park. Green Dragon Bowmen, an archery club, are also based in the Park.

Knebworth Woods is a Site of Special Scientific Interest. 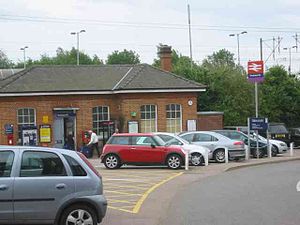 Many of Knebworth's residents are retired or work in the surrounding towns and villages but there is employment in the village:

The developed part of Knebworth around the railway station is approximately 120 ha. This gives a density of approximately 17 dwellings per hectare.[4] Recent developments such as New Close, Kerr Close, Peter's Way and Woodstock and (the extension of) Wadnall Way have significantly increased this average density. The population of Knebworth has approximately doubled since 1970.[5]

Knebworth is twinned with: