Bushey (population 24,000) is a town in the Hertsmere borough of Hertfordshire in the East of England. Bushey Heath is a large neighbourhood south east of Bushey on the boundary with the London Borough of Harrow reaching elevations of 165 metres (541 ft) above sea level.[1]

The first written record of Bushey is an account in the Domesday Book, which describes a small agricultural village named 'Bissei' (which later became ‘Biss(h)e’ and then ‘Bisheye’ during the 12th century). However, chance archaeological findings of Stone Age tools provide evidence that the area was inhabited as far back as the Palaeolithic period. The town also has links to the Roman occupation of Britain, with the main road running through it being Roman; sites of possible Roman villas being unearthed in the area; and a Roman tessellated pavement was discovered near Chiltern Avenue.[2]

The origin of the town’s name is not fully known. With the original name ‘Bissei’, an early theory in Reverend J.B. Johnstone’s book The Place-Names of England and Wales states that it may have meant ‘Byssa’s Isle’, and that it started life as a lake-village surrounded by marshes, streams and lakes. However, a more modern theory (albeit a less romantic one) is that it is simply derived from the Old English word bysce and Old French boisseie, meaning a ‘place covered with wood’. The latter theory could prove more apt, as the town is located in the valleys which extend southwards from the Chiltern Hills, which were once covered in dense forests of oak, elm, ash, hazel and juniper.

Bushey Heath’s story begins in the Napoleonic Wars during a large food shortage. To help solve the problem, the government awarded the waste land to the east of Bushey to Bushey landowners to be used as farming; this land was more generally known as Bushey Common. Whilst the original aim was to produce food, being close to a railway and up to 500 feet above sea level with beautiful and broad views made the area attractive for housing developers. 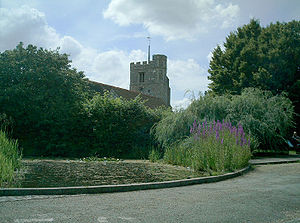 The 19th and 20th centuries marked the time of most change in Bushey, especially between 1860–1960 CE. The population rose 28-fold within 200 years, from 856 in 1801, to just under 24,000 today. This expansion was due to many reasons, one of the main ones being due to the boom in industry caused by the railway in the early 20th century. A result of this was that many new jobs were created in and around Watford, and in the early 1920s, Bushey's first council houses were built. More housing was later built for the service families working in defence organisations in Stanmore and Northwood. The expansion eventually died down, due to much of the land in and around Bushey being protected under the Metropolitan Green Belt after the Second World War.

This same Metropolitan Green Belt legislation was also partly responsible for the abandonment of the pre-war Edgware to Bushey Heath extension as part of the Northern Heights programme of the Northern line underground railway. The Metropolitan Green Belt put great restrictions on new development, and the plan was to use the new railway to stimulate new housing around the new route; without the new housing the route was deemed no longer viable. However, as work was advanced at the onset of war the depot was completed for use as bomber manufacture, and following the Second World War and Metropolitan Green Belt coming into force it was converted into the Aldenham bus depot (of Cliff Richard's Summer Holiday fame), which it remained until 1985, when it became derelict. It was redeveloped in 1996 and is now the Centennial Park Industrial Estate (Lua error in Module:Coordinates at line 668: callParserFunction: function "#coordinates" was not found.). Bushey Heath station would have been located at the intersection of Elstree Road and Northwestern Avenue (Lua error in Module:Coordinates at line 668: callParserFunction: function "#coordinates" was not found.). Conceptual plans existed in the 1903 Act of Parliament for an Edgware to Watford railway that would have seen the railway extended at a later date though Bushey village and on to Watford market, though even less came of this than the partially completed Edgware to Bushey Heath stretch.

The highest point in the historic county of Middlesex was in Bushey Heath on the border between Hertfordshire and Middlesex at the junction of the A4140 and the A409. At 153 metres or 502 feet above sea level the grid reference was TQ 152937.

The lack of farming in Bushey Heath meant that it was a heavily wooded area up to the 18th century, and this, added to the lack of street lighting and police, meant that Bushey Heath’s history is full of tales of thieves, highwaymen and even murder. According to Grant Longman's Robberies on Bushey Heath, the road from Bushey Heath to Stanmore is said to be where the highwaymen lurked, ready to raid the dozen or so caravans that passed through Bushey Heath daily, carrying money from trade in London. Before venturing through the pass, parties of travellers and merchants would form at the Boot Inn at Edgware and the Three Crowns at Bushey Heath so they didn’t have to venture through the pass alone. Although one of the highwaymen responsible for the attacks is rumoured to have been the notorious Dick Turpin, evidence suggests that he was in fact more active in the region of Essex. 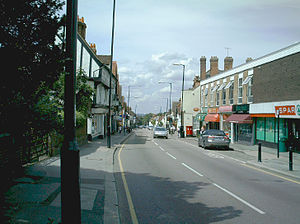 Despite being close to London and having Watford on its doorstep Bushey retains the feeling of a small town and this is reinforced with events such as the Bushey Festival and quarter marathon which is held each July and the Horticultural Society's flower and produce show.

Being located near several film studios at Elstree and Borehamwood, Bushey and Bushey Heath frequently feature as backdrops for many film and TV shows. Most notable is a bus scene in the Cannon and Ball film, and in the 1957 film Lucky Jim. Several historic buildings in Bushey, notably the old Royal Masonic School for Boys, later the International University, in the Avenue, have been used in films over a long period of time, including, Nuns on the Run, Out of Bounds, Children of Men and Harry Potter. and also the comedy series Little Britain. It has also been the set for several television series, including Monty Python's Flying Circus and Little Britain. This site is currently being redeveloped for residential usage, with the 1960s additions to the site having been demolished.

Many of The Avengers episodes include location shots around the Bushey area, and the latter half of the Confessions of a Driving Instructor is entirely shot on the roads between Elstree and Bushey, finishing in the car dump at 'Bushey Breakers'.

The University of London, located in the Bushey area has been used in the filming of BBC's Grange Hill and also for various other programmes, such as family business. Pupils from local schools including Bushey Hall and Bushey Meads have taken part as extras in productions such as My Dad's the Prime Minister.

Bushey Heath is home to a duck pond, (Warren Lake) which was restored in 1992 after falling into dereliction.

The area contains a mix of primary schools and linked infants and junior schools (see schools in Bushey).

The state secondary schools are Queens' School, Bushey Meads School and Bushey Academy (also known as Bushey Hall), of which the first two generally do well in comparison with other schools in the county. Bushey is also the site of the famous Purcell School, a school for young musicians well known for turning out many successful musicians. It was formerly the Royal Caledonian School. There are also two private girls' schools, St. Hilda's and St Margaret's in the area.

Hubert Herkomer was a poor immigrant from Bavaria, who moved to Bushey in 1874, and ended life in 1914 as Sir Hubert von Herkomer RA CVO. Herkomer had visited a friend who lived in Bushey in 1873, and returned to rent a pair of cottages and a studio near Melbourne Road. He founded Herkomer’s Art School at Bushey in 1883, which, in its 21-year life, attracted some 500 students to the area, some of whom stayed after establishing their own studios. Their paintings are on display in the Bushey Museum. A street, Herkomer Road, was named in his memory.

At around 1888, he built Lululaund (Lua error in Module:Coordinates at line 668: callParserFunction: function "#coordinates" was not found.), a ‘Bavarian castle’, which was named after his second wife Lulu Griffiths. After being married for only a year she died. Lululaund dominated the Bushey skyline until 1939 when it was demolished, a lot of the building was used as hardcore for Bovingdon Airfield, and much of the woodwork and carvings from the castle was burnt.

In 2014, a local developer has now restored and retained Lululaund bringing back the history that did remain into luxury apartments;[3][4]

Sir Hubert is mainly remembered as an artist today, but in his time he was a polymath, becoming involved in some of the earliest film productions in Europe, and starting a series of races and time trials for cars in Germany.

In 1904 Herkomer closed his school and sold the building. The school was re-opened in 1905 on the same site by the artist Lucy Kemp-Welch as the Bushey School of Painting. In 1912 Herkomer bought back the school building and demolished it. A rose garden was laid out on the site.[5]

There is a gallery named after Kemp-Welch close to the village church. It is more usually used as a village hall today, with occasional exhibitions such as one in September 2006 by students from the Chelsea College of Art.

Bushey Film Studios in Melbourne Road were originally built by Hubert Herkomer and operated between 1913 and 1985. For much of its existence the studios focused on low-budget productions.

Bushey was home to Hillside Studios where various programmes were made including The Tube and Pob's Programme.

Bushey has been twinned with German town Landsberg am Lech in Bavaria (Southern Germany) for its historical link. To Landsberg belonged the native village, Waal, of artist Herkomer detailed above. The towns retain links for mayoral duties and school exchange trips.