There are three main types of lap steel guitar:

Lap slide and resonator guitars may also be fitted with pickups, but do not depend on electrical amplification to produce sound. 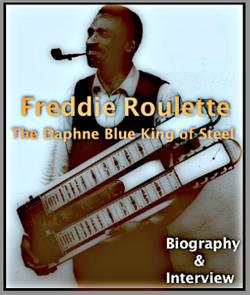 A lap steel guitar's strings are raised at both the nut and bridge ends of the fingerboard, typically to about half an inch. The strings are too high to contact the surface of the neck, so frets, if present, are only for reference and are often replaced by markers. Some lap steel guitars can be converted between lap and fretted playing, or are modified versions of conventional guitars—the only difference is usually string height. Round-necked resonator guitars set up for steel playing fall into this category.

Instruments designed exclusively as lap steel guitars typically have modified necks that make fretted playing impossible. The hollow neck acoustic lap steel, developed by Chris Knutsen and popularized by Weissenborn, extends the body cavity behind the neck all the way to the head. The square-necked resonator guitar has a strengthened square profile neck, allowing heavier string gauges and/or higher tunings that would normally be considered impossible (or certainly ill-advised) on a conventional guitar. The electric lap steel guitar typically incorporates the entire neck into the solid body of the guitar, again providing extra strength to allow a greater variety of string gauges and tunings.

Console steel guitars, typically with more than six strings and/or multiple necks, are rarely played in lap steel fashion (without their legs), but are often referred to as lap steel guitars by many makers and authorities. See table steel guitar. 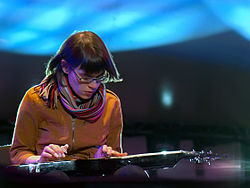 The lap steel guitar is typically placed on the player's lap, or on a stool in front of the seated player. When playing with stand-up musicians, such as in a bluegrass band, it has become an alternative for the player to also play standing up; supporting the guitar with a guitar strap around the neck, with the guitar suspended horizontally, resting against the stomach area; providing stage mobility, such as for mic accessibility for singing. Unlike a conventional guitar, the strings are not pressed to a fret when sounding a note; rather, the player holds a metal slide called steel (or tone bar) in the left hand, which is moved along the strings to change the instrument's pitch while the right hand plucks or picks the strings. This method of playing greatly restricts the number of chords available, so lap steel music often features melodies, a restricted set of harmonies (such as in blues), or another single part. 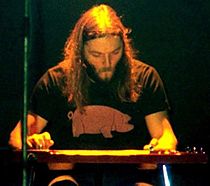 The steel guitar, when played in Hawaiian, Country, Bluegrass, or Western Swing styles, is almost always plucked using a plastic thumbpick affixed to the right hand's thumb, and metal or plastic "fingerpicks" fitted to the first 2, 3, or even all 4 fingers of the right hand. This allows the player greater control when picking sets of notes on non-adjacent strings. Some Blues players, especially those who use a round-neck resonator guitar played upright, conventional-guitar-style, with a bottleneck or hollow metal slide on one left-hand finger, forgo the fingerpicks and thumbpicks, and use their bare fingers and thumb instead. On the other hand, a minority of Blues players, and many Rock players, use a conventional flatpick. Tut Taylor is one of the few Dobro players that use a flatpick. 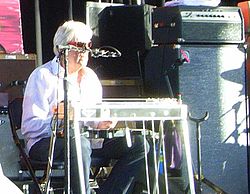 It is widely reported that the lap steel guitar was invented by a man named Joseph Kekuku in 1885.[1][2][3][4] It is said that, at the age of 7, Kekuku was walking along a railroad track and picked up a metal bolt, slid the metal along the strings of his guitar and was intrigued by the sound.[4] He taught himself to play using this method with the back of a knife blade. Various other people have also been credited with the innovation.[5] The instrument became a major fad in the United States during the 1920s and 1930s. The instrument became especially popular in Hawaii, as musicians played in tent-rep shows.[6]

It was electrified in the early 1930s, and in 1932 the first production electric guitar was introduced, the aluminum Ro-Pat-In (later Rickenbacker) A22 "Frying Pan" lap steel. This made the so-called "Hawaiian" guitar the first electric stringed instrument (just a few years before Les Paul and Charlie Christian modified their instruments and after the theremin was patented in 1928). The earliest documented performance with an electrically amplified guitar was in 1932, by Gage Brewer. The Wichita, Kansas-based musician had an Electric Hawaiian A-25 (frypan, lap-steel) and a standard Electric Spanish from George Beauchamp of Los Angeles, California. Brewer publicized his new instruments in an article in the Wichita Beacon of October 2, 1932 and through performances that month. The first electric instrument on a commercial recording was made and played in 1935 by Bob Dunn, a musician in Houston, Texas who played in the Western swing band Milton Brown and His Musical Brownies. Dunn owned a music store that bore his name in the Houston area.

The lap steel, dobro and pedal steel guitar are associated most closely with Hawaiian music, country music and bluegrass, though some players have used them in rock music, jazz, blues, and other musical genres. The round neck, metal-bodied resonator guitar is used almost exclusively by blues, rock, or blues-rock musicians. 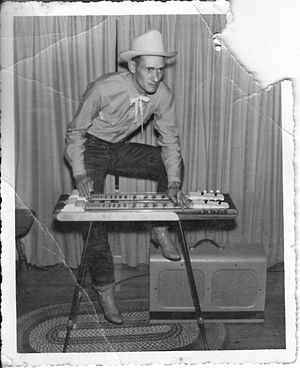 The Lap steel guitar is not tuned in standard guitar tuning (E-A-D-G-B-E, low to high). Rather, it is usually tuned to an open chord, often an extended chord like a 6th, 7th, or 9th. (All tunings are shown low-to-high; that is, thickest string to thinnest, or 6th string to 1st string).

Blues and Rock players tend to favor one of two tuning families: open G/open A, or open D/open E.

Open G is tuned D-G-D-G-B-D; open A raises each of those notes a whole-step (2 frets) to E-A-E-A-C#-E. During the 1920s and 1930s, much of the sheet music written for lap steel utilized open A tuning as the de facto standard tuning for the instrument.

Open D is tuned D-A-D-F#-A-D, and open E is a whole-step higher: E-B-E-G#-B-E. Joe Perry of Aerosmith uses Open E on his electric lap steel. David Lindley is another player who uses transposed variations of these tunings.

Bluegrass and Country Dobro players using a square-neck instrument tend to favor an altered G tuning, often called "High-G", where the 6th string is tuned up to "G" instead of down to "D", and the 5th string is also tuned up, to B: G-B-D-G-B-D. They also sometimes raise it up to "High-A": A-C#-E-A-C#-E. These are examples of tunings possible on a lap steel that could cause serious damage if attempted on a round-neck resonator or standard guitar.

Henry Kaleialoha Allen in his book[7] uses a modified C6 tuning, with a Bb in the bass: Bb-E-G-A-C-E.

Dobro players also generally use a set of strings with different gauges than those used on standard electric or acoustic guitars to help them to project more sound and to achieve their higher tunings.

Many Western Swing lap steel players, and some Old-Time Country lap steel players, use a C6 tuning. There is no "standard" C6 tuning; one popular one is C-E-G-A-C-E. This tuning is a good one for learning Don Helms' lap steel melodies from old Hank Williams records, although Helms used a lap steel with legs (a "console steel"), with two necks having 8 strings each; Helms actually used an E13 tuning, which adds the 7th (D) and the 13th (C#) to the E tuning, making it B-D-E-G#-B-C#-E-G#, low to high. An extended C6/FMaj7 is used by Western Swing pedal steel guitarists on their 10-string pedal steels. This tuning, C-F-A-C-E-G-A-C-E-G, is difficult to achieve on the 6-string steel but a subset thereof is achieved as previously mentioned. A6 is a commonly used alternate for C6.

The E7 tuning is used by many players, especially those who begin learning with the Mel Bay Steel Guitar Method instructional books. The E7 tuning in those books is spelled either B0-D-E-G#-B-E or with the 6th string lowered to the tonic E: E-D-E-G#-B-E. Note the similarity of this second tuning to the open E tuning above: the only difference is the 5th string, which is lowered from the tonic E to the 7th note in the key of E, which is D.

There are many other tunings used by players. Pedal Steel guitarists switching over to lap steel often bring over a modified version of the 10-string E9 tuning that is the standard for Country pedal steel; pedal steels, and a few non-pedal "console steels" actually have multiple necks, each in a different tuning, and very often on a pedal steel the 2 main necks will be in E9 and C6 tunings. As noted under the C6 tuning, an A6 tuning is also used.

See the Links below for a list of additional tunings.