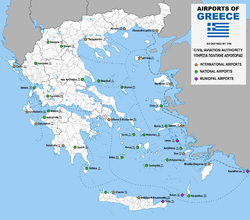 This is a list of airports in Greece, grouped by type and sorted by location.

Greece, officially the Hellenic Republic, is a country in southeastern Europe, situated on the southern end of the Balkan Peninsula. It has land borders with Albania, the Republic of Macedonia and Bulgaria to the north, and Turkey to the east. The Aegean Sea lies to the east of mainland Greece, the Ionian Sea to the west and the Mediterranean Sea to the south.

Greece is divided into 13 regions (the official regional administrative divisions), including nine on the mainland and four island groups. The regions are further subdivided into 74 regional units. The country has a large number of islands (approximately 1,400, of which 227 are inhabited), including Crete, the Dodecanese, the Cyclades and the Ionian Islands among others.