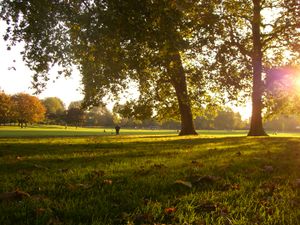 Southwark Park is located in Rotherhithe, in central South East London, and is managed by the London Borough of Southwark. It first opened in 1869 by the Metropolitan Board of Works as one of its first parks. It was designed by Alexander McKenzie and covers 63 acres (250,000 m2).[1] It takes its name from being in what was the old Parliamentary constituency of Southwark at the time of its opening.

It received £2.5 million from the National Lottery's Heritage Lottery Fund in 1998 which enabled large parts of the park to be refurbished. 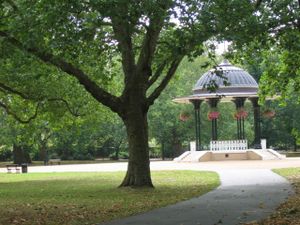 The bandstand dates from 1884 and was originally sited in the Royal Horticultural Society grounds at South Kensington. It has a sister in Peckham Rye Park.

The Old English Cottage Garden was designed by Col. J.J. Sexby, Parks Superintendent for the London County Council. The idea for the rose garden came from Dr Alfred Salter, Member of Parliament for West Bermondsey. It was opened in 1936 and was named after Ada Salter when she died in 1943.[2]

As with many spaces within London, the Plane tree (Platanus x hispanica) is dominant within Southwark park particularly the northern most section around the bandstand, which runs next to Jamaica Road.

However, the park is also rich in trees less common in London. Opposite the entrance to the art gallery is a Walnut tree (Juglans regia) and a series of three or four Silver Maples (Acer saccharinum). There is as also a Red Oak (Quercus rubra) close to these maples. Next to the duck pond and the garden area there are three Swamp Cypresses (Taxodium distichum), although without the distinctive wooden 'knees' which sometimes surround trees of this variety.

The P12 also serves the park as it travels along Southwark Park Road and stops near the entrance there.

Local buses 1, 199 and N1 buses stop nearby the park along Lower Road, at Surrey Quays Station, near the Lower Road entrance and at Rotherhithe Police Station, which is across from Gomm Road, where another entrance to the park is at the end of it.

The 1 and 381 buses, long with their night routes; N1 and N381 also stop at Warndon Street, on Rotherhithe New Road, this is the closest stop to the Hawkstone Road entrance.