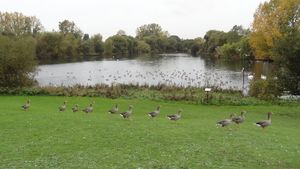 Mayesbrook Park is a 43 hectare[1] public park in Dagenham in the London Borough of Barking and Dagenham. It is owned and managed by the borough council. The southern end, which is mainly a large lake, is a Local Nature Reserve.[2][3] The area covered by the park was once part of the historic Manor of Jenkins, seat of the Fanshawe family.

The park, which was opened in 1934, was created to meet the need for open space for the London County Council's Becontree Housing Estate. The park has a car park, a children's play area, football pitches, a cricket pitch and pavilion, an athletic track, tennis courts, basketball court, and lakes.[1] The Mayesbrook Park project has used green infrastructure engineering to address flood water management needs.[4]

The southern end has two large lakes which are rich in wildlife, newly planted woodland and rough grassland.[2] The Mayes Brook runs along the western edge. There is access from Lodge Avenue.[1] Lua error in Module:Coordinates at line 668: callParserFunction: function "#coordinates" was not found.