From Infogalactic: the planetary knowledge core
Jump to: navigation, search
This article is about Oktoberfest celebrations around the world. For the original festival in Munich, see Oktoberfest.

The Oktoberfest is a two-week festival held each year in Munich, Germany during late September and early October. It is attended by six million people each year and has inspired numerous similar events using the name Oktoberfest in Germany and around the world, many of which were founded by German immigrants or their descendants.

The largest Oktoberfest outside of Germany is mostly regarded as being in Canada, in the twin cities of Kitchener and Waterloo, Ontario, Canada (750,000- 1,100,000 visitors),[1] followed by Blumenau, Brazil with (700,000+),[2] Cincinnati, Ohio, United States (500,000+ visitors)[3] and the Denver Oktoberfest Denver, Colorado, United States (450,000+ visitors).[4] However, the largest one mostly depend on specific year's numbers and varies with sources.[5] Currently Oktoberfest is spreading to new geographical locations; starting in September 2007, Montreal began hosting its own Oktoberfest. Parker, Colorado hosts a traditional Oktoberfest each year. It's the most traditional Oktoberfest in Colorado.

The National Beer Festival (Fiesta Nacional de la Cerveza) is Argentina's version of the German Oktoberfest. It has taken place every October since 1963 in Villa General Belgrano, Córdoba. The party emerged by the hand of the first German immigrants. This festival attracts thousands of tourists for two consecutive weekends.

Following the end of many of the university based events, private event company, Nokturnl Events, launched Oktoberfest in the Gardens in the Supreme Court Gardens, Perth on the 7th October 2011. The event has grown into the largest of its kind in Western Australia. In 2014 the event was also held in Melbourne, with Birrarung Marr Reserve in the heart of the CBD hosting a sell out crowd. Event organiser Nokturnl Events have announced that in 2015 the event will be coming to Sydney.

The Harmonie German Club, Canberra, holds an Oktoberfest over a three-day period every year in October. The festival is currently in its 45th year, and attracts a large number of visitors from Canberra and surrounding regions.[7]

In Canada there is an annual nine-day celebration spread over 18 days in Kitchener, Ontario. It attracts over 1,000,000 visitors annually.[8] While its most popular draws are the beer-based celebrations, other cultural and entertainment attractions also fill the week. The most well-known is the parade held on Thanksgiving Day. As the only major parade on Canadian Thanksgiving, it is televised nationally. Coincidentally, the closing day of the Bavarian Oktoberfest also falls on the German equivalent of Thanksgiving, Erntedankfest.

The twin cities and surrounding area have a long history of German roots. Kitchener was formerly named Berlin. A significant portion of the population of Kitchener and surrounding areas identify themselves as being of German heritage, and many still speak German. A common phrase at the celebrations is Gemütlichkeit, German for congeniality, or warm friendliness.

Oktoberfest celebrations are also held annually in Sherbrooke, Quebec at the beginning of October. The one night event is held by Sherbrooke's University Engineering Students' Association. It draws approximately 5,000 revellers each year.

In Chile bierfests are celebrated in Valdivia, Puerto Octay, Puerto Varas, Frutillar and Llanquihue and Malloco.

In Colombia it is sponsored by Bavaria Brewery. A series of concerts and events are held along different cities, with special emphasis in those with German background like Bucaramanga. 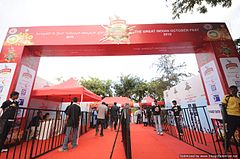 In Bangalore, India, Kingfisher beer established The Great Indian October Fest in 2005. Since 2012 In Chennai, India, Park Hyatt Chennai [13] and Hyatt Regency Chennai has been organizing an annual Oktoberfest festival during the second half of September every year offering extensive spread of traditional Bavarian cuisine and a selection of German Beer.[14]

An Oktoberfest celebration is held in the town of Taybeh, State of Palestine home to the only Palestinian brewery (Taybeh Brewery). The first Taybeh Oktoberfest was held in 2005.[15]

Oktoberfest beer and music festival celebrations held usually from September up to December. It is organized by San Miguel Brewery, which is the makers of San Miguel Beer and other alcoholic beverages. The 2015's edition of their Oktoberfest, was coincide with the 125th anniversary of San Miguel Beer Pale Pilsen.[16]

Oktoberfest is celebrated annually in mid September at various German schools around the country most notably the Deutsche Schule Pretoria. 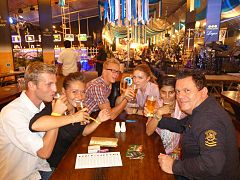 Oktoberfest celebration is held in Colombo, Sri Lanka every year.

German-Americans are the largest self-reported ancestral group in the United States. Correspondingly[vague], there are hundreds of large and small Oktoberfest celebrations held annually throughout the country, the largest being Oktoberfest Zinzinnati in Cincinnati, Ohio. 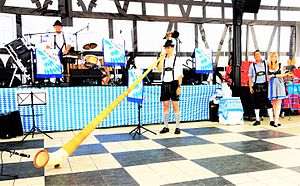 Known for its large German immigrant population, the Commonwealth of Pennsylvania and its historic Pennsylvania Dutch (Pennsylvania Deutsch) population are well known to have many Oktoberfest celebrations during the months of September and October. These celebrations became increasingly popular among the general Commonwealth population in the later half of the 20th century with the rise of microbreweries, and with the opening of authentic German brew houses such as Hofbrauhaus in Pittsburgh, PA.

Other major celebrations across the United States include those at: 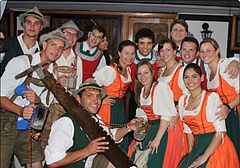 In Venezuela, specifically in Colonia Tovar,[27] it is held annually since 1970 . Sometimes music groups have been invited from Germany to interpret typical music. The Historic center of Colonia Tovar has a population of about 10,000 inhabitants and it is estimated that during the days of the event the town receives twice of visitors. It is considered as the 4th best Oktoberfest in the world (outside Germany) by some sources,[28] even better positioned than the Blumenau Oktoberfest in Brazil.

In Greater Caracas, it's celebrated in the suburb of El Hatillo,[29][30] it's sponsored by the embassy of Germany and Poland, and the German-speaking Catholic Community. 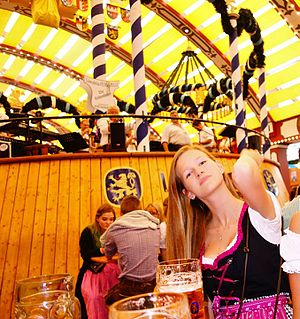 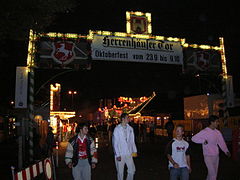 An entrance arch to Oktoberfest Hannover in 2005.

The Oktoberfest Hannover is a fair which takes place every year at the end of September/beginning of October in Hanover, Germany. It usually lasts 17 days and features 140 rides and inns, two large beer tents seating more than a thousand people each, and numerous stands, beer gardens and five small beer tents offering food and refreshments. The program consists of a Dirndl-Competition, three Fireworks, two Family-Days, a hand lantern parade for kids and a backstage tour. You can get a special festival-beer from the local brewery "Brauerei Herrenhausen", the "Lüttje Lage" (an alcoholic speciality of Hannover) and many food from Lower Saxony and Bavaria. With around one million visitors each year, it is the second-largest Oktoberfest in Germany.

Oktoberfest in Berlin continues to grow, and 2014 will mark the 64th celebration of oktoberfest in Berlin. Several large areas including Alexanderplatz and zentral festplatz will be turned into Bavarian like beer and food tents. Live brass Bavarian bands will play at venues around town and people can be seen in traditional Bavarien dress around the city. Many places will also serve the official Oktoberfest beers that must be made in Munich. These events can last from mid September to early-mid October, and are the largest Oktoberfest events outside of Munich.[31]

Note that traditional fairs in Bavaria, called Dult, Volksfest (popular festival) etc., are similar to the Oktoberfest in nature (not in size), but not called Oktoberfest as they did not arise in imitation of it. Of these, the Gäubodenvolksfest of Straubing enjoys particular fame. 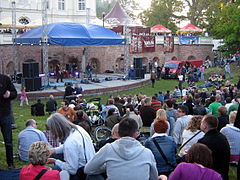