From Infogalactic: the planetary knowledge core
Jump to: navigation, search
This article is about the car company founded in 1922. For the electric & hybrid vehicle company Frazer-Nash Research, see Kamkorp. For the UK engineering consultancy, see Frazer-Nash Consultancy Ltd. For the aircraft equipment manufacturer, see Nash & Thompson. 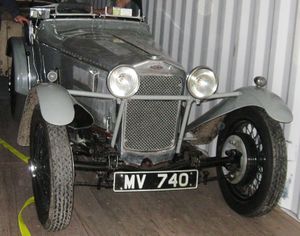 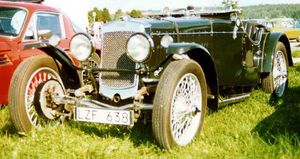 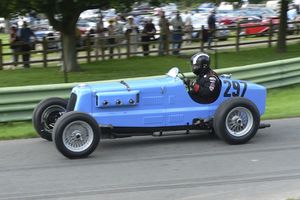 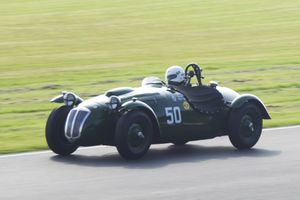 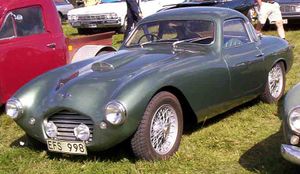 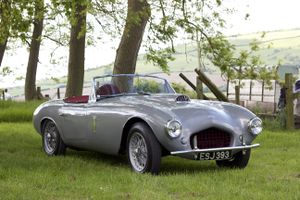 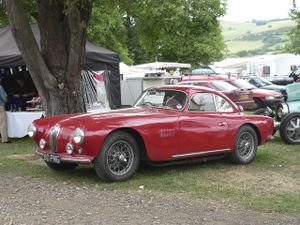 Frazer Nash is a British sports car manufacturer and engineering company founded by Archibald Frazer-Nash in 1922. It produced sports cars incorporating a unique multi-chain transmission before the Second World War and also imported BMW cars to the UK. After the war it continued producing sports cars with conventional transmission until 1957. It also continued selling BMW cars and motorcycles and finally in 1956 became the official importer of Porsche cars.

The company was founded in 1922 by Archibald Frazer-Nash who had, with Henry Ronald Godfrey founded and run the GN cyclecar company. The company was established in Kingston upon Thames, Surrey, moving to Isleworth, Middlesex in 1929. The company entered receivership in 1927 and re-emerged as AFN Limited. The majority of AFN was acquired by H. J. ("Aldy") Aldington in 1929 and run by the three Aldington brothers, H.J., Donald A. and William H. Aldy's son, John Taylor ("JT") Aldington was the last of the family owners/directors until AFN Ltd was sold to Porsche GB. The company produced around 400 of the famous chain drive models between 1924 and 1939.

AFN, Ltd became importers and assemblers of BMW cars in 1934 and sold them as Frazer Nash-BMW. They were the official British BMW importer until the outbreak of war in 1939. In 1954 the company started to sell Porsche cars, becoming the official importer for Great Britain in 1956. This lasted until 1965 when Porsche Cars Great Britain was set up; Aldington family members remained on the board of this company until John Aldington sold out to Porsche in 1987, Nash & Thompson was formed in 1929 by Archibald Frazer-Nash and E. Grattan Thompson to develop the Frazer-Nash hydraulic aircraft gun turret

During the Second World War, Nash & Thompson was involved in armaments production with its turrets in use on British bombers such as the Avro Lancaster and Vickers Wellington. There are several successor companies still (as of 2011) active in engineering consultancy (Frazer-Nash Consultancy), engineering (Frazer-Nash (Midhurst) Ltd. and electric & hybrid vehicle technology (Frazer-Nash Group of Companies, owned by Kamkorp, which also owns Bristol Cars).

AFN Ltd produced about 85 more cars from 1948 to 1957. These cars were entirely unrelated to the chain-drive pre-war Frazer Nash, but were largely a direct evolution of the sporting BMW 328, mentioned above. AFN, as owners of the UK rights to the 328 engine licensed Bristol to make it against an agreement for its supply to them. Models include the Le Mans Replica, the Mille Miglia, the Targa Florio, the Le Mans Coupé and the Sebring. Competition successes included a third place at Le Mans (1949) and wins in the Targa Florio (1951) and the 12 Hours of Sebring, 1952. The post-war cars are very highly prized by collectors. The company participated in the 1952 Formula One season, the cars driven by Tony Crook and Ken Wharton.

Considering the small number of cars made, the model range is vast and the following is not entirely comprehensive. Cars were all built to order and virtually any combination was possible. Some were rebuilt at the factory as different versions.