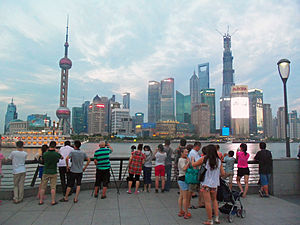 Tourism in China has greatly expanded over the last few decades since the beginning of reform and opening. The emergence of a newly rich middle class and an easing of restrictions on movement by the Chinese authorities are both fueling this travel boom. China has become one of the world's most-watched and hottest inbound and outbound tourist markets. The world is on the cusp of a sustained Chinese tourism boom.[1]

China is the third most visited country in the world. The number of overseas tourists was 55.98 million in 2010.[2] Foreign exchange income was 45.8 billion U.S. dollars, the world's fourth largest in 2010. The number of domestic tourist visits totaled 1.61 billion, with a total income of 777.1 billion yuan.[1]

According to the WTO, in 2020, China will become the largest tourist country and among the largest for overseas travel. In terms of total outbound travel spending, China is expected to be the fastest growing in the world from 2006 all the way to 2015, jumping into the number two slot for total travel spending by 2015.[1]

China's growing economy is also generating a surge in business travel. In China, the percentage of sales dependent on business travel is higher (38%) as compared to the US (21%) and 28% in the UK, according to the World Travel & Tourism Council's 2013 business travel forecast for the Asia-Pacific region.[3] 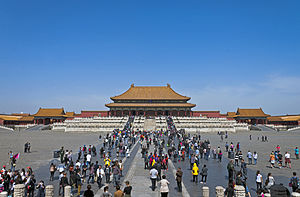 Tourists inside the Forbidden City, Beijing

Between 1949 and 1974, the People's Republic was closed to all but selected foreign visitors. In the late 1970s, when Deng Xiaoping decided to promote tourism vigorously as a means of earning foreign exchange, China started to develop its tourist industry. Major hotel construction programs greatly increased the number of hotels and guest houses, more historic and scenic spots were renovated and opened to tourists, and professional guides and other service personnel were trained.

The expansion of domestic and international airline traffic and other tourist transportation facilities made travel more convenient. Over 250 cities and counties had been opened to foreign visitors by the mid-1980s. Travelers needed only valid visas or residence permits to visit 100 locations; the remaining locales required travel permits from public security departments. In 1985 approximately 1.4 million foreigners visited China, and nearly US$1.3 billion was earned from tourism. 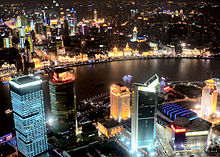 China has become a major tourist destination following its reform and opening to the world in the late 1970s instigated by Deng Xiaoping. In 1978, China received about 230,000 international foreign tourists, mostly because of the severe limitations that the government placed on who was allowed to visit the country and who was not.[5] In 2006 China received 49.6 million international visitors, making it the fourth most-visited country in the world.[6] In 2007 international tourist arrivals to China increased to 54.7 million.[7]

Most tourists to China in 2014 came from the following countries:[8]

Some form of Chinese is virtually universal in China, with Mandarin as the standard form and many other varieties also in use; some, like Cantonese and Shanghainese, have tens of millions of speakers. Although many Chinese do not speak English, due to the educational system, many Chinese near and in urban areas can read and write it, even though they may have difficulty with spoken English.[citation needed] 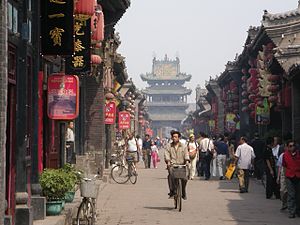 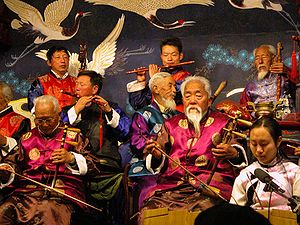 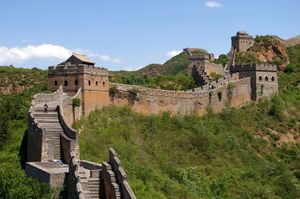 A section of the Great Wall of China at Jinshanling 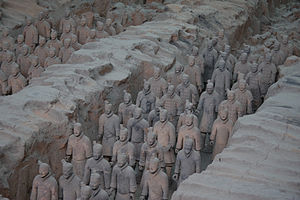 The Terracotta Army in Xi'an. 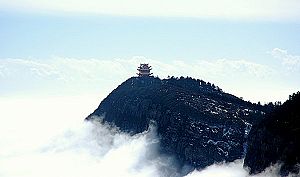 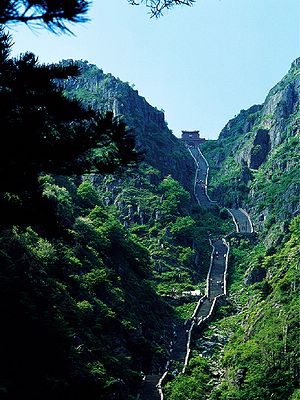 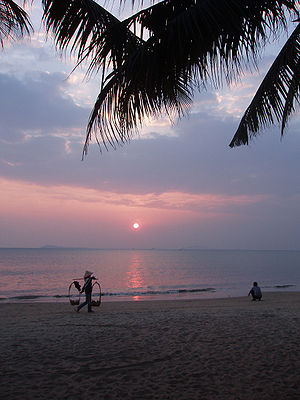 Hainan Island, sometimes referred to as "Hawaii of the Orient" is located off the south coast of mainland China. It hosts most of China's tropical resorts, and because of this, is extremely popular with mainland Chinese, as well as those from Hong Kong and nearby Asian countries. During the past few years, the Chinese government has heavily promoted Hainan Island as a world class resort with beaches and golf courses which are plentiful on Hainan Island. In addition, the ability to visit traditional Li and Miao cultural villages, hike among lush tropical rain forests and mountainsides, and visit significant cultural artifacts from long ago dynasties, has had a significant effect on tourism on the island. The Chinese and Hainan governments intend to continue to spend a great deal of money on infrastructure (December 2004 completion of Hainan to mainland China train; and, around the island expressways for cars and buses) and promotion of Hainan Island.

Tourist resources in China can be divided into three main groups: natural sites, historical and cultural sites, and folk customs. 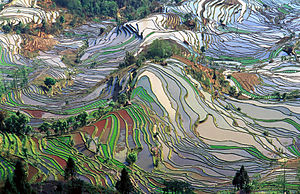 Mount Tai (Tai Shan) in the east, Mount Hengshan in the south, Mount Hua in the west, Mount Hengshan in the north, and Mount Song in the center of China have been called the Five Sacred Mountains since antiquity. The Taishan massif, which snakes through central Shandong, is admired by Chinese as paramount among them. Another mountain celebrated for its beauty is Huangshan in southern Anhui, known for its graceful pines, unusual rocks, cloud seas and hot springs.

Jiuzhaigou, Huangguoshu Waterfall, and Guilin are all located in southwestern China. Jiuzhaigou in northern Sichuan is a beautiful "fairyland valley" running over 40 km through snow-covered mountains, lakes, waterfalls, and forest. The Huangguoshu Waterfalls in Guizhou are a group of waterfalls, 18 above-ground and four below, which can be heard from five km away. The Li River in Guangxi Zhuang Autonomous Region winds its way through karst peaks for 82 km between Guilin and Yangshuo.

On the plateau in northern China are many spectacular lakes. The Tianchi (Heavenly Pool) in the Tianshan Mountains in Xinjiang Autonomous Region is 1,980 meters above sea level. This 105-m-deep lake is crystal clear, the high mountains surrounding it carpeted with green grass and colorful flowers.

Along the renowned Three Gorges of the Yangtze River are many scenic spots and historical sites; the Qutang Gorge is rugged and majestic, the Wu Gorge elegant, deep and secluded, the Xiling Gorge full of shoals and reefs and rolling water. The Lesser Three Gorges are lush with greenery, flanking water so clear you can see to the bottom. The Three Gorges Dam built here is China's biggest key hydro-power project. 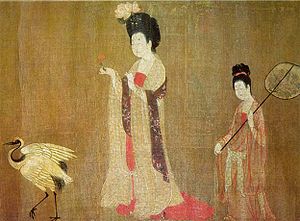 China's long history has left many cultural relics and the title of "China Top Tourist City" has gone to the first group of 54 cities. The Great Wall, a symbol of the Chinese nation, is also a prime example of historical sites that have become major tourist attractions. As the greatest defense-structure project in the history of human civilization, it dates back more than 2,000 years ago to the Spring and Autumn and the Warring States periods - huge in its scale and grandeur. There are more than ten sections of the Great Wall open to tourists, including the passes, blockhouses and beacon towers at Badaling in Beijing, Laolongtou in Hebei and Jiayuguan Pass in Gansu.

Grottoes filled with precious murals and sculptures are concentrated along the ancient Silk Road in Gansu. The best known are the Mogao Caves, a "treasure house of oriental art", with 492 caves with murals and statues on the cliff faces. There are 45,000 sq m of murals and over 2,100 colorful statues, all of high artistry. In the south, grotto art is represented in Sichuan by the Leshan Giant Buddha, carved into a cliff face. Seventy-one meters high and 28 meters wide, it is the largest sitting Buddha in stone, showing the carving skill of ancient craftsmen.

The Shaolin Temple in Henan, the birthplace of Chinese Zen Buddhism and famous for its Shaolin Kung Fu martial arts, dates back to 495 AD. Here can be seen the Ming period Five-Hundred-Arhats Mural and Qing period Shaolin kungfu paintings. In Hubei, the beautiful Wudang Mountain, with 72 peaks covering an area of 30 km2 (12 sq mi), form a sacred site of Taoism, which preserves one of China's most complete and largest-scale ancient Taoist architecture. In western Sichuan, Mount Emei, dotted with ancient Buddhist temples and structures, is one of China's four sacred Buddhist mountains｡

Most of China's 101[citation needed] cities classified as famous historical and cultural cities are over 1,000 years old. South of the Yangtze River, Suzhou and Hangzhou, long known as "paradise on earth", are crisscrossed with rivers, lakes, bridges, fields and villages, as beautiful as paintings. Today's well-preserved ancient cities includes that of Pingyao in central Shanxi, but was also the site of the Neolithic era Yangshao and Longshan cultures, 5,000 to 6,000 years ago. Ancient Lijiang in Yunnan is not only the center of Dongba culture of the Nakhi ethnic group but also a meeting place for the cultures of Han, Tibetan and Bai ethnicities. Built in the Song Dynasty, this city has many stone bridges, stone memorial arches and dwelling houses, which provide precious materials for architectural history and can be called a "living museum of ancient dwelling houses." 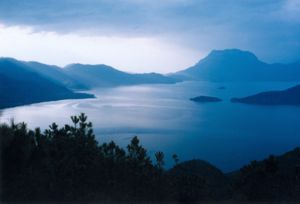 "March Street" celebrated by the Bai people in Dali, Yunnan, is associated with the Buddhist Goddess of Mercy suppressing a devil to help the Bai people. It became traditional to burn incense and offer sacrifices to commemorate her virtues every year and the festival has become a major annual gathering for Bai commercial, cultural and sports activities.

The Water-Sprinkling Festival of the Dai ethnic group in Xishuangbanna, Yunnan, is a lively occasion taking place in the spring. People chase and pour water (a symbol of good luck and happiness) over each other, among other activities such as dragon boat racing and peacock dance.

Lugu Lake between Sichuan and Yunnan has become a tourist destination following the building of a new highway giving access to this area. The matriarchal society of the 30,000 local Mosuo people is noted for its "no marriage" traditions and is called the last women's kingdom on the earth. Mosuo women, local dugout canoes and undulating singing style are considered unique to Lugu Lake.

The China National Tourism Administration promotes a tourist theme every year; 1992 was "Friendly Sightseeing Year." Then came "Landscape Tour", "Tour of Cultural Relics and Historical Sites", "Folk Customs Tour", "Holiday Tour", and "Ecological Environment Tour." From 2000 to 2004, the themes were "Century Year", "Sports and Health of China", "Folk Arts of China", and "Culinary Kingdom of China", and "Catch the Lifestyle."

The themes for 2005 are "China Travel Year" and "Beijing 2008 -- Welcome to China." In order to strengthen exchange and cooperation with the international tourism industry, the China National Travel Administration is planning a series of related events, including the Shanghai-hosted "2005 International Tourism Fair of China", the Beijing-hosted 2005 annual meeting of the Federation of Travel Agencies of France, and "the 2005 China-Australia Tourism Symposium." The China International Online Travel Fair 2005 held in March was comprehensive, providing an online exchange and trading platform between tour companies themselves and with their customers. 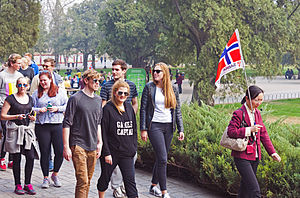 The fast development of China's transportation infrastructure provides wide-ranging travel for domestic and overseas tourists. Throughout China a great many hotels and restaurants have been constructed, renovated or expanded to satisfy all levels of requirement, and there are now 9,751 hotels with star ratings. All large or medium-sized cities and scenic spots have hotels with complete facilities and services for both domestic and international visitors.

China currently has 1,364 international travel agencies, 249 of them located in Beijing, Shanghai, Tianjin and Chongqing. On June 12, 2003, the China National Tourism Administration and the Ministry of Commerce jointly issued Interim Regulations on the Establishment of Foreign-funded or Wholly Foreign-owned Travel Agencies. On July 18, 2003, the China National Travel Administration approved the registration of JALPAK International (China) Ltd. as the first wholly foreign-owned travel company to enter China's tourist market. The company has started operations in Beijing, mainly handling Japanese tourism in China. On December 1, 2003, TUI China Travel Company was formally established in Beijing—the first overseas-controlled joint venture in China's tourism industry. The controlling party is Martin Buese China Limited and TUI Europe's largest travel group. Their Chinese partner is China Travel Service that has a network of over 300 local offices.