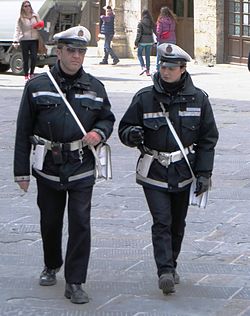 Crime in Italy is combated by the spectrum of Italian law enforcement agencies. 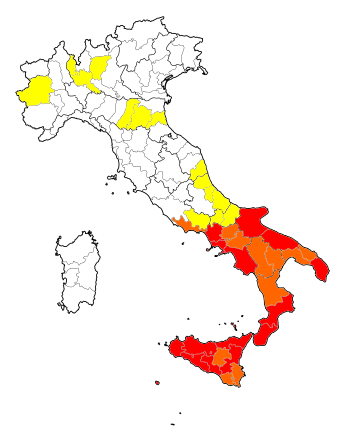 The incidence of Pizzo (extortion) by organised crime across Italy's provinces.

The Mafia originated in Italy, and its influence is widespread in Italian society, directly affecting a reported 22% of Italians and 14.6% of Italy's Gross Domestic Product.[2] Public figures such as former Prime Minister Silvio Berlusconi have been charged with association in organized criminal acts.[3] The fight against the Mafia has cost many lives, including victims of high-profile assassinations, such as judges Giovanni Falcone and Paolo Borsellino.

There are four separate criminal organizations controlling territory and business activities in four Southern Italian regions: Cosa Nostra in Sicily, the Camorra in Campania, 'Ndrangheta in Calabria and Sacra Corona Unita in Apulia. Together, they exert influence over 13 million Italians.[2] Their business involvement is on a European and global scale.[4]

Businesses, entrepreneurs, shopkeepers, and craftsmen in these southern regions are expected to pay a pizzo, or protection money, to crime syndicates controlling their area. There is rarely any possibility of escaping payment, and those not complying find their business premises and lives at risk. People not able to meet demands might find their business partly or completely taken over by organized crime.[4]

Italy has a lower per capita rate of rape than most of the advanced Western countries in the European Union.[6]

According to Police authorities data, the rate of sexual assaults per 100,000 inhabitants is significantly higher in the Northern region than in the Southern ones. In 2009, Lombardia and Emilia Romagna were the regions with the highest rate of sexual offences per 100.000 inhabitants (9.7); followed by Trentino Alto Adige and Tuscany (9.5); Piedmont and Liguria (8.6); Umbria (8.4). In this respect, all major Southern regions like Sicily (6.8); Calabria (6.5); Puglia (6.2); Campania (6,0) were the safest in the national territory, with the only exception of Friuli Venezia Giulia (5.1) in the North.[7]

Fraud is a major contributor to Italy's crime rate, with some level of fraud appearing in all sectors of the economy since the country's founding in 1861. Notable cases of financial fraud include the collapse of Parmalat in the early years of the 21st century, and the Lockheed bribery scandal in the 1970s.

Insurance fraud also dramatically increases the cost of insurance in Italy, with 115,646 incidents of fraudulent claims in 2001 alone, with 3.28 percent of all claims in 2002 accertained to have involved fraud. The percentage rose above ten percent in some of the southern provinces.[8]

State employees have been perceived to have such a high rate of absenteeism, often feigning illness, that in 2008 the government introduced a law to harshly prosecute civil servants who are found to be making fraudulent claims about their health.[9] Fraudulent claims of ill health are not confined to state employees, with some physicians often willing to receive bribes to certify non-existent conditions so that citizens may receive disability benefits. A case was revealed in 2010 where in one quartiere of Naples alone, 400 people were found to be claiming mental illness although healthy.[10]

Political corruption remains a major problem in Italy, particularly in Southern Italy including Calabria, parts of Campania and Sicily where corruption perception is at a high level.[11][12] Political parties are ranked as the most corrupt institution in Italy, closely followed by public officials and Parliament, according to Transparency International's Global Corruption Barometer 2013.[13]

Levels of crime are unevenly spread throughout the peninsula.

Traditionally, the areas most affected by high levels of violent crime have been the Southern regions heavily influenced by powerful criminal organizations: Sicily, Calabria, Campania and Apulia, where drug trade and gang feuds are common in marginalised areas in underdeveloped rural and urban settings alike.[citation needed]

High unemployment and waste management problems continue to affect Naples; Italian media have attributed the city's waste disposal issues to the activity of the Camorra organised crime network.[14] In 2007, Silvio Berlusconi's government held senior meetings in Naples to demonstrate their intention to solve these problems.[15] In June 2012, allegations of blackmail, extortion and illicit contract tendering emerged in relation to the city's waste management issues.[16][17]

The Casalesi clan (in Italian: Clan dei casalesi) is the most dangerous clan of the Camorra. It was formed during the 1970s in the town of Casal di Principe, which is at the top of the list of Italian cities, towns and villages with the highest rate of crime. The clan mainly operates in the territory of the Province of Caserta, in Campania, where it has strong influence in politics and administration, but it also has several affairs in the regions of Lazio and Lombardy.

According to Italian writer and journalist Roberto Saviano, the Casalesi clan perpetrates illicit activities in the countries of Spain, Poland, Hungary, Bulgaria, Germany, United Kingdom, Romania, Dominican Republic, Venezuela, Kenya, France, Brazil, Portugal and China. According to Saviano, the clan is linked to the construction of the World Trade Center in New York City. Among the main activities of the Casalesi are drug and waste traffics, illicit building construction and participation in illicit banking and insurance services.

Most regions in the center and north can be considered calmer and more organized, with lower levels of criminal activity. Regions such as Marche, Tuscany, Umbria in the centre and Piedmont, Trentino-Alto Adige/Südtirol, Liguria and Friuli Venezia Giulia present relatively low criminal indicators compared to other western countries. But even in the north and center levels of crime are unequally spread. Cities such as Turin, Milan, Monza Brescia, Padua, Vicenza, Venice (Mestre), Verona, Bologna, Genoa in the North frequently suffer a wide diversity of frequent offences ranging from extensive drug trade, homicides, etc.[citation needed]

The capital Rome presents medium to high levels of crime. But many areas of the Roman periphery are extensively dilapidated and crime-ridden to a much larger extent than northern and central European counterparts. Shantytowns on the outskirts of the city housing more than 4000 people (mostly Romanians) are focuses of elevated criminal activity.

Petty crimes such as pick pocketing, car burglary, and purse snatching are serious problems, especially in large cities. Most reported thefts occur at crowded tourist sites, on public buses or trains, or at the major railway stations.[citation needed]