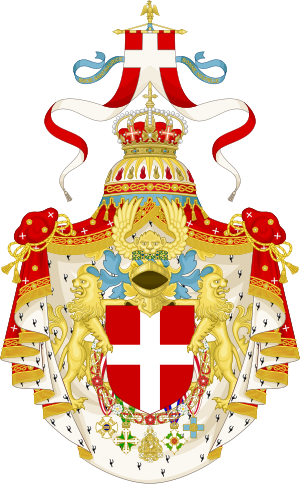 Coat of Arms of the House of Savoy

The Nobility of Italy comprises individuals and their families of the Italian peninsula, and the islands linked with it, recognized by sovereigns, such as the Holy Roman Emperor, the Holy See, the Kings of Italy, and certain other Italian kings and sovereigns, as members of a class of persons officially enjoying hereditary privileges which distinguished them from other persons and families. They often held lands as fiefs and were sometimes endowed with hereditary titles or nobiliary particles. From the Middle Ages until 1861, "Italy" was not a single country but was a number of separate kingdoms and other states, with many reigning dynasties. These were often related through marriage to each other and to other European royal families.

Before Italian Unification there was a relatively huge nobility in Italy. 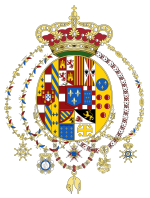 Coat of arms of the Kingdom of the Two Sicilies

16th-, 17th- and 18th-century Italy (after the Renaissance) was home to myriad noble families that had risen to prominence via judicial appointment, election to the various regional senates or appointment to Catholic Church office.[1]

There were also families which had been part of Italian nobility for many decades or even centuries. Writing in the 19th century, Leopold von Ranke recorded:

During this period, throughout Italy, various influential families came to positions of power through the election of a family member as Pope or were elevated into the ranks of nobility through ecclesiastic promotion. These families freely intermarried with aristocratic nobility. Like other noble families, those with both papal power and money were able to purchase comunes or other tracts of land and elevate family patriarchs and other relatives to noble titles. Hereditary patriarchs were appointed Duke, Marquis and even Prince of various 16th- and 17th-century principalities. According to Ranke:

Popes commonly elevated members of prominent families to the position of Cardinal; especially second and third sons who would not otherwise inherit hereditary titles. Popes also elevated their own family members - especially nephews - to the special position of Cardinal-Nephew. Prominent families could purchase curial offices for their sons and regularly did, hoping that the son would rise through Church ranks to become a Bishop or a Cardinal, from which position they could dispense further titles and positions of authority to other family members.[1]

The period was famous for papal nepotism and many families, such as the Barberini and Pamphili, benefited greatly from having a papal relative. Families that had previously been limited to agricultural or mercantile ventures found themselves, sometimes within only one or two generations, elevated to the Roman nobility when a relative was elected to the papal throne.[1] Modern Italy is dotted with the fruits of their success - various family palazzi remain standing today as a testament to their sometimes meteoric rise to power. 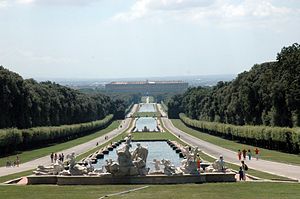 Modern Italy became a nation-state during the Risorgimento on 17 March 1861, when most of the states of the peninsula and Kingdom of the Two Sicilies were united under King Victor Emmanuel II of the Savoy dynasty, hitherto monarch of the Kingdom of Sardinia, a realm that included Piedmont. The architect of Italian unification was Count Camillo Benso di Cavour, the Chief Minister of Victor Emmanuel. Rome itself remained for a further decade under the Papacy, and became part of the Kingdom of Italy only in 1870. In September of that year, invading Italian troops entered the city, and the ensuing occupation forced Pope Pius IX to his palace where he declared himself a prisoner in the Vatican until the Lateran Pacts of 1929.

Nobility in the Kingdom

Under the united Kingdom of Italy a new national nobility, with an attempt (not wholly successful) to impose a uniform nobiliary law, was created, including male succession (although it was possible for ancient titles to be transferred to an heir in the female line by royal authority), and some acknowledgement by the King of Italy of titles conferred by Francis II of the Two Sicilies in exile by making new grants in the same name. Those nobles who maintained allegiance to the pope became known as the Black Nobility.[2]

After the unification, the kings of Italy continued to create titles of nobility to eminent Italians, this time with a validity for all of the Italian territory. For example, General Enrico Cialdini was created Duca di Gaeta for his role during the unification. The practice continued until the 20th century, when nominations would be made by the Prime Minister of Italy and approved by the Crown. In the aftermath of the First World War, most Italians who were ennobled received their titles through the patronage of the Mussolini government. Examples include General Armando Diaz (Duca della Vittoria), Admiral Paolo Thaon di Revel (Duca del Mare), Commodore Luigi Rizzo (Conte di Grado e di Premuda), Costanzo Ciano (Conte di Cortellazzo i Buccari), Dino Grandi (Conte di Mordano) and Cesare Maria de Vecchi (Conte di Val Cismon). Many of these were victory titles for services rendered to the nation in the Great War. The writer and aviator Gabriele d'Annunzio was created Principe di Montenevoso in 1924, and the physicst, inventor, and Nobel laureate Guglielmo Marconi was also ennobled in 1924 as Marchese Marconi. In 1937, Ettore Tolomei was ennobled as Conte della Vetta. When Cardinal Eugenio Pacelli became Pope in 1939, Mussolini had the title of Principe bestowed on the new Pontiff's late brother Francesco Pacelli, who had already been made a Marchese by the Holy See during his lifetime.

in 1929, the Lateran Treaty acknowledged all Papal titles created before that date and undertook to give unquestioned recognition to titles conferred by the Holy See on Italian citizens in the future.[2]

In 1946, the Kingdom of Italy was replaced by a republic. Under the Italian Constitution adopted in 1948, titles of nobility are not legally recognised.[3] Certain predicati (territorial designations) recognised before 1922 may continue to be attached to surnames and used in legal documents. Often these were historic feudal territories of noble families. A high court ruling in 1967 definitively established that the heraldic-nobiliary legislation of the Kingdom of Italy (1861–1946) is not current law.

The southern kingdoms of Naples, Sicily and Sardinia, as well as the Papal states, granted the titles typical of monarchies such as Spain, France or England: Prince, Duke, Marquis, Count, Baron. The title of Viscount was not as frequent in Italy as elsewhere.

In Northern Italy and Tuscany the situation was more complex, because there were many kinds of authorities granting titles.

Typically, Italian comunes (also in the Kingdom of Naples) and Republics granted or recognised the title of Patrician, which was only regarded as a rank of nobility in Italy. The patriciate was an urban aristocracy, as opposed to a feudal one.

However, the Republic of Venice also granted feudal titles. In the republics of Venice, Genoa and Ragusa, the head of state had the title of Doge, a variant form of Duca (Duke) or Rector.

In the Middle Ages,

During the Renaissance the monarchs conquered all the city-republics except Venice, Genoa, Lucca, San Marino and Ragusa. So, in most of Italy, patricians were integrated into the low ranks of aristocracy.

Until 1806, Northern Italy (except Venice and Ragusa, now Dubrovnik) and Tuscany formed the Kingdom of Italy, belonging to the Holy Roman Empire. The Emperor retained for himself the right of creating dukes and princes. The Northern Italian monarchs had received from the Emperor the right of granting the lower feudal titles (from Marquess downwards), since these monarchs often were princes and dukes themselves.

When in 1861 the King of Sardinia annexed the other Italian states, the Consulta Araldica (the Italian college of arms) integrated these different and varied systems in the hierarchy described below. In practice, this took decades.

This hierarchy resulted from the overlapping of titles granted by the pre-unitarian states, which were differed frm each other. As a consequence, titles were not homogeneously distributed throughout the country and, respectively, in each region some title was completely absent.

By 1946, with abolition of the monarchy, a number of titles borne by families in the pre-unitary states (Two Sicilies, Papal State, etc.) still had not been matriculated by the Consulta Araldica. This explains the use of certain titles by families (and "claimants") whose position was not regularised between 1861 and 1946. 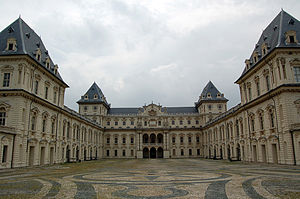