Edward Hugh John Neale Dalton, Baron Dalton PC (16 August 1887 – 13 February 1962) was a British Labour Party economist and politician who served as Chancellor of the Exchequer from 1945 to 1947. He shaped Labour Party foreign-policy in the 1930s, opposed pacifism, promoted rearmament against the German threat, and strongly opposed the appeasement policy of Prime Minister Neville Chamberlain in 1938. He served in Churchill's wartime coalition cabinet. As Chancellor, he pushed his cheap money policy too hard, and mishandled the sterling crisis of 1947. Dalton's political position was already in jeopardy in 1947, when, he, seemingly inadvertently, revealed a sentence of the budget to a reporter minutes before delivering his budget speech. Prime Minister Clement Attlee accepted his resignation, but he later returned to the cabinet in relatively minor positions.

His biographer Ben Pimlott characterised Dalton as peevish, irascible, given to poor judgment and lacking administrative talent.[1] He also recognised that Dalton was a genuine radical and an inspired politician; a man, to quote his old friend and critic John Freeman, 'of feeling, humanity, and unshakeable loyalty to people which matched his talent.'[2]

Born in Neath, in Wales, his father, John Neale Dalton, was a Church of England clergyman who became chaplain to Queen Victoria, tutor to princes Albert Victor and George, later King George V, and a canon of Windsor.

Dalton was educated at Summer Fields School and then at Eton College, where he was head of his house, but was disappointed not to be elected to "Pop". He went up to King's College, Cambridge, where he was active in student politics and his socialist views, then very rare amongst undergraduates, earned him the nickname "Comrade Hugh". Whilst at Cambridge he was President of the Cambridge University Fabian Society. He did not succeed in becoming President of the Cambridge Union Society, despite three unsuccessful attempts to be elected Secretary.

He went on to study at the London School of Economics and the Middle Temple. During the First World War, he was called up into the Army Service Corps, later transferring to the Royal Artillery. He served as a Lieutenant on the French and Italian Fronts, where he was awarded the Italian decoration, the Medaglia di Bronzo al Valor Militare, in recognition of his 'contempt for danger' during the retreat from Caporetto; he later wrote a memoir of the war called With British Guns in Italy. Following demobilisation, he returned to the LSE and the University of London as a lecturer, where he was awarded a DSc for a thesis on the principles of public finance in 1920.[3][4] 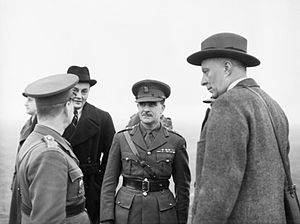 Hugh Dalton, right, Minister of Economic Warfare, and Colin Gubbins, chief of SOE, talking to a Czech officer during a visit to Czech troops near Leamington Spa, Warwickshire

At the 1929 general election, he succeeded his wife Ruth Dalton as Labour Member of Parliament (MP) for Bishop Auckland in 1929. Widely respected for his intellectual achievements in economics, he rose in the Labour Party's ranks, with the election in 1925 to the shadow cabinet and, with strong union backing, to the Labour Party national executive committee (NEC). He gained foreign policy experience as under-secretary at the Foreign Office, 1929–31. He lost the position when he, and most Labour leaders, rejected the national government of Prime Minister Ramsay MacDonald. As with most other Labour MPs, he lost his seat in 1931; he was elected again in 1935.

Dalton in 1935 published Practical Socialism for Britain, a bold and highly influential assessment of a future Labour government's policy options. The book revived updated nuts-and-bolts Fabianism, which had been out of favour, and could be used to attack the more militant Left. His emphasis was on using the state as a national planning agency, an approach that appealed well beyond Labour.[5]

Turning his attention to the looming crisis in Europe, he became the Labour Party's spokesman on foreign policy in Parliament. Pacifism had been a strong element in Labour Party (and other parties as well), but the Spanish Civil war changed that, as the Left moved to support arms for the Republican ("Loyalist") cause. Aided by union votes, Dalton moved the party from semi-pacifism to a policy of armed deterrence and rejection of appeasement. He was a bitter enemy of Prime Minister Neville Chamberlain who tried to buy off ("appease") Germany at Munich in 1938. When war came in 1939 he and other top Labour leaders made clear they would join any coalition government except one headed by Chamberlain. That caused Chamberlain's fall, and he was replaced by Winston Churchill.

During the coalition government (1939–45) headed by Winston Churchill he was Minister of Economic Warfare from 1940–42. He established the Special Operations Executive, and was later a member of the executive committee of the Political Warfare Executive. He became President of the Board of Trade in 1942; the future Labour leader Hugh Gaitskell, drafted into the Civil Service during the war, was his Principal Private Secretary.

After the unexpected Labour victory in the 1945 general election, Dalton wished to become Foreign Secretary, but instead the job was given to Ernest Bevin. Dalton, a highly skilled economist, became Chancellor of the Exchequer. Alongside Clement Attlee, Ernest Bevin, Herbert Morrison and Stafford Cripps, Dalton was initially seen as one of the "Big Five" of the Labour Government.[6]

The Treasury faced urgent problems. Half of the wartime economy had been devoted to mobilizing soldiers, warplanes, bombs and munitions; an urgent transition to a peacetime budget was necessary, while minimizing inflation. Financial aid through Lend Lease from the United States was abruptly and unexpectedly terminated in September 1945, and new loans from the United States and Canada were essential to keep living conditions tolerable. In the long run, Labour was committed to nationalization of industry and national planning of the economy, to more taxation of the rich and less of the poor, and to expanding the welfare state and creating free medical services for everyone.[7] 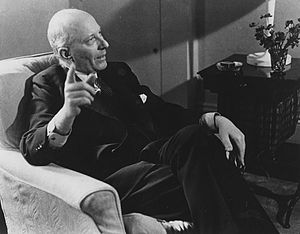 During the war most overseas investments had been sold to pay for the war (thus losing their income), and Britain suffered severe balance of payments problems. The $3.75 billion 50-year American loan negotiated by John Maynard Keynes in 1946 (and the $1.25 billion loan from Canada) was soon exhausted. By 1947 rationing had to be tightened and the convertibility of the pound suspended. In the atmosphere of crisis Herbert Morrison and Stafford Cripps intrigued to replace Clement Attlee with Ernest Bevin as Prime Minister; Bevin refused to play along and Attlee bought off Cripps by giving him Morrison's responsibilities for economic planning. Ironically, of the "Big Five" it was to be Dalton who ultimately fell victim to the events of that year.

An important goal for Dalton in 1945–47 was cheaper money—that is, low interest rates. He wanted to avoid the high interest rates and unemployment experienced after the First World War and to keep down the cost of nationalization. Dalton gained support for this cheaper money policy from John Maynard Keynes as well as officials from the Bank of England and the Treasury.[8]

Budgetary policy under Dalton was strongly progressive, as characterised by policies such as increased food subsidies, heavily subsidised rents to council house tenants, the lifting of restrictions of house-building, the financing of national assistance and family allowances, and extensive assistance to rural communities and Development Areas.[9] Dalton was also responsible for funding the introduction of Britain's universal family allowances scheme, doing so "with a song in my heart," as he later put.[10][11] In one of his budgets, Dalton significantly increased spending on education (which included £4 million for the universities and the provision of free school milk), £38 million for the start (from August 1946) of family allowances, and an additional £10 million for Development Areas. In addition, the National Land Fund was established. Harold Macmillan, who inherited Dalton’s housing responsibilities, later acknowledged his debt to Dalton’s championing of New Towns, and was grateful for the legacy of Dalton’s Town Development Bill, which encouraged urban overfill schemes and the movement of industry out of cities.[12]

Food subsidies were maintained at high wartime levels in order to restrain living costs, while taxation structures were altered to benefit low-wage earners, with some 2.5 million workers taken out of the tax system altogether in Dalton’s first two budgets. There were also increases in surtax and death duties, which were opposed by the Opposition. According to one historian, Dalton’s policies as Chancellor reflected “an unprecedented emphasis by central government on the redistribution of income”.[13]

Walking into the House of Commons to give the autumn 1947 Budget speech, he made an off-the-cuff remark to a journalist, telling him of some of the tax changes in the budget. The news was printed in the early edition of the evening papers before he had completed his speech, and whilst the stock market was still open. This led to his resignation for leaking a Budget secret; he was succeeded by Stafford Cripps. Though initially implicated in the allegations that led to the Lynskey tribunal in 1948, he was ultimately exonerated. 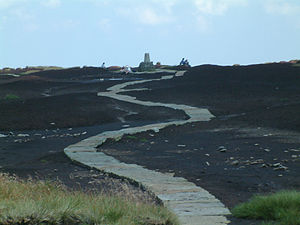 The paved surface of the Pennine Way on Black Hill

In 1948 he returned to the Cabinet as Chancellor of the Duchy of Lancaster, making him a minister without portfolio. He became Minister of Town and Country Planning in 1950, renamed as Minister of Local Government and Planning in 1951. An avid outdoorsman, he served a term as president of the Ramblers Association, which promoted walking tours.[14] Dalton was an environmentalist before the term came into fashion. As Chancellor in 1946 he started the National Land Fund to resource national parks, and in 1951 he approved the Pennine Way, which involved the creation of 70 additional miles of rights of way. He still had the ear of the Prime Minister, and enjoyed promoting the careers of candidates with potential, but was no longer a major political player as he had been until 1947. He left government after Labour lost the 1951 General Election.

Although Dalton was married and had a daughter who died in infancy in the early 1920s, his biographer Ben Pimlott and various other sources suggested that he was a repressed homosexual.[16] As a young man, Dalton was close to the poet Rupert Brooke, who died in 1915, and in later years, he acted as a mentor to various handsome young men – who were almost uniformly heterosexual. One notable beneficiary of Dalton's support was Anthony Crosland, whom Dalton talent-spotted at the Oxford Union in 1946 and whose selection for a winnable seat for the 1950 General Election Dalton later helped to arrange.

His papers, including his diaries, are held at the London School of Economics Library.

Dalton substantially expanded Max Otto Lorenz's work in the measurement of income inequality, offering both an expanded array of techniques but also a set of principles by which to comprehend shifts in an income distribution, thereby providing a more compelling theoretical basis for understanding relationships between incomes (1920). Following a suggestion by Pigou (1912, p. 24), Dalton proposed the condition that a transfer of income from a richer to a poorer person, so long as that transfer does not reverse the ranking of the two, will result in greater equity (Dalton, p. 351). This principle has come to be known as the Pigou–Dalton principle (see, e.g., Amartya Sen, 1973). Dalton offered a theoretical proposition of a positive functional relationship between income and economic welfare, stating that economic welfare increases at an exponentially decreasing rate with increased income, leading to the conclusion that maximum social welfare is achievable only when all incomes are equal (Rogers, 2004).