The Flag of Spain

The Coat of arms of Spain 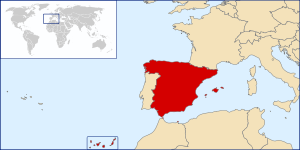 The location of Spain 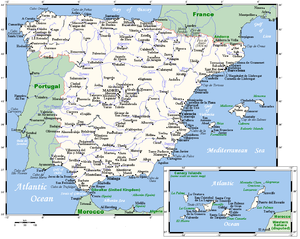 An enlargeable map of the Kingdom of Spain

The following outline is provided as an overview of and topical guide to Spain:

Spain – sovereign state located on the Iberian Peninsula in southwestern Europe. Spanish territory also includes the Balearic Islands in the Mediterranean, the Canary Islands in the Atlantic Ocean off the African coast, three exclaves in North Africa, Ceuta, Melilla, and Peñón de Vélez de la Gomera that border Morocco, and the islands and peñones (rocks) of Alborán, Chafarinas, Alhucemas, and Perejil. Spain is a democracy organized in the form of a parliamentary government under a constitutional monarchy. It is a developed country with the 14th largest economy in the world. It is a member of the European Union, United Nations, NATO, OECD, WTO and many other international organizations. 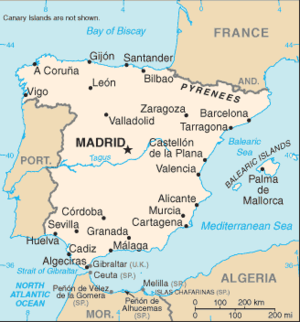 An enlargeable basic map of Spain 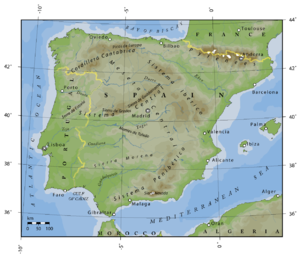 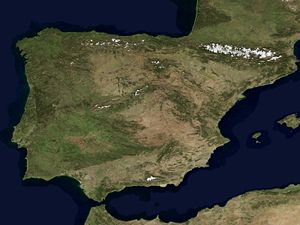 An enlargeable satellite image of Spain

Autonomous communities of Spain – each has its own parliament and government

Autonomous cities of Spain – less autonomous than the autonomous communities, but with more autonomy than Spain's other cities

Government and politics of Spain

Main article: Government of Spain and Politics of Spain

Branches of the government of Spain

Executive branch of the government of Spain

Legislative branch of the government of Spain

Judicial branch of the government of Spain

The Kingdom of Spain is a member of:[1]

Law and order in Spain

History of Spain by period

History of Spain by region

History of Spain by subject

Spanish people (or People of Spain)

Religion and belief systems in Spain

Economy and infrastructure of Spain