An enclave is any portion of a state that is entirely surrounded by the territory of a single other state.[1] An exclave is a portion of a state geographically separated from the main part by surrounding territory.[2] Many exclaves are also enclaves. Enclave is sometimes used improperly to denote a territory that is only partly surrounded by another state.[1] Examples of enclaved countries include San Marino and Lesotho. Examples of exclaves include Nakhchivan and Campione d'Italia. Campione d'Italia is also an enclave.

An inaccessible district, as used here, is a portion of a state not completely separated from the main part by alien territory, but that can only be reached easily by passing through alien territory.

The word enclave is French and first appeared in the mid-15th century as a derivative of the verb enclaver (1283), from the colloquial Latin inclavare (to close with a key).[3] Originally, it was a term of property law that denoted the situation of a land or parcel of land surrounded by land owned by a different owner, and that could not be reached for its exploitation in a practical and sufficient manner without crossing the surrounding land.[4] In law, this created a servitude[5] of passage for the benefit of the owner of the surrounded land.

Later, the term enclave began to be used also to refer to parcels of countries, counties, fiefs, communes, towns, parishes, etc. that were surrounded by alien territory. This French word eventually entered the English and other languages to denote the same concept although local terms have continued to be used. In India, the word "pocket" is often used as a synonym for enclave (such as "the pockets of Puducherry district").[6] In British administrative history, subnational enclaves were usually called detachments or detached parts, and national enclaves as detached districts or detached dominions.[7] In English ecclesiastic history, subnational enclaves were known as peculiars (see also Royal Peculiar).

The word exclave, modeled on enclave,[8] is a logical extension of the concept of enclave. 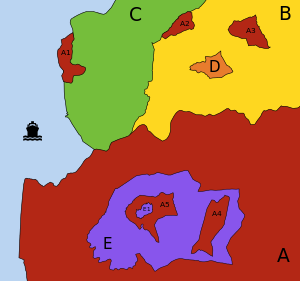 Different territories (countries, states, counties, municipalities, etc.) are represented by different colours and letters; separated parts of the same territory are represented by the same colour and letter, with a different number added to each smaller part of that territory (the main part is identified by the letter only). In topological terms, A and E are non-connected surfaces, and B, C and D are connected surfaces. However, C and D are also simply connected surfaces, while B is not (it has genus 2, the number of "holes" in B).

Enclaves exist for a variety of historical, political and geographical reasons. For example, in the feudal system in Europe, the ownership of feudal domains was often transferred or partitioned, either through purchase and sale or through inheritance, and often such domains were or came to be surrounded by other domains. In particular, this state of affairs persisted into the 19th century in the Holy Roman Empire, and these domains (principalities, etc.) exhibited many of the characteristics of sovereign states.

Residing in an enclave within another country has often involved difficulties in such areas as passage rights, importing goods, currency, provision of utilities and health services, and host nation cooperation. Thus, over time enclaves have tended to be eliminated. For example, two-thirds of the then-existing national-level enclaves were extinguished on August 1, 2015, when the governments of India and Bangladesh implemented a Land Boundary Agreement that exchanged 162 first-order enclaves (111 Indian and 51 Bangladeshi). This exchange thus effectively de-enclaved another two dozen second-order enclaves and one third-order enclave, eliminating 197 of the Indo-Bangladesh enclaves in all. The residents in these enclaves had complained of being effectively stateless. Only Bangladesh's Dahagram–Angarpota enclave remained.

For illustration, in the figure (right), A1 is a pene-enclave (attached to C but also bounded by water). Although A2 is an exclave of A, it cannot be classed as an enclave because it shares borders with B and C. The territory A3 is both an exclave of A and an enclave from the viewpoint of B.

A historical example was West Berlin before the reunification of Germany, which was a de facto West German enclave, being enclaved by East Germany. (Also, 12 small West Berlin enclaves, such as Steinstücken, were separated from the city, some by only a few meters.[9]) All of Berlin was ruled de jure by the four Allied powers; however, the East German government and the Soviet Union treated East Berlin as an integral part of East Germany.

Position of Lesotho within South Africa

Three nations are completely surrounded by another country:

The Principality of Monaco is not an enclave, although it only borders France, because it possesses a coastline and territorial waters. For the same reason, The Gambia is also not an enclave.

Historically, four of the Black homelands or Bantustans of South Africa were granted nominal independence, unrecognized internationally, by the Nationalist government from 1976 until their reabsorption in 1994. Others remained under government rule from 1948 to 1994. Being heavily partitioned, various parts of these Bantustans were true enclaves. 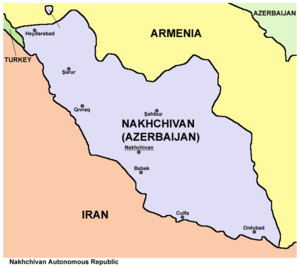 Sometimes, administrative divisions of a country, for historical or practical reasons, caused some areas to belong to one division while being attached to another. 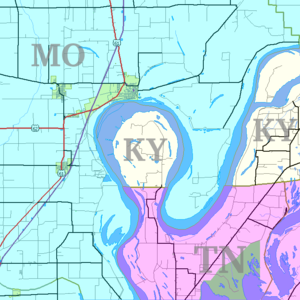 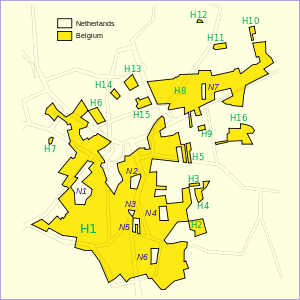 Map showing the non-contiguous Belgian exclaves of Baarle-Hertog in the Netherlands which, in turn, has Dutch enclaves within it. 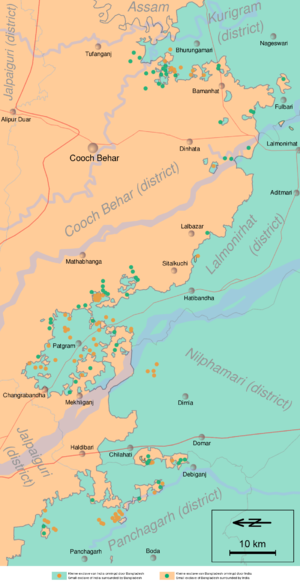 Indo-Bangladesh enclaves created by the 1947 Partition of India

It is possible for an enclave of one country to be completely surrounded by a part of another country that is itself an enclave of the first country.

An ethnic enclave is a community of an ethnic group inside an area in which another ethnic group predominates. Ghettos, Little Italys, barrios and Chinatowns are examples. These areas may have a separate language, culture and economic system.

A pene-enclave is any portion of a state that has land borders with a single other state, but is not completely surrounded by it or that state's territorial waters.

Inaccessible districts are regions that are conterminous with the main land region but that are only easily accessible by going through a second country.

Conversely, a territory that is an exclave but does not function as one (instead functioning as an adjacent part of the main nation) is deemed a "quasi-exclave".(Robinson 1959)

Land owned by a foreign country

Some areas of land in a country are owned by another country and in some cases it has special privileges, such as being exempt from taxes. These lands are not enclaves and do not have extraterritoriality since, in all cases, there is no transfer of sovereignty. 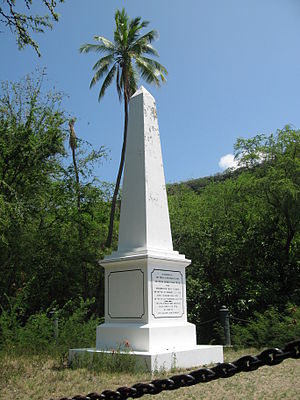 Changes in borders can make a railway that was previously located solely within a country traverse the new borders. Since diverting a railway is expensive, this arrangement may last a long time. This may mean that doors on passenger trains are locked and guarded to prevent illicit entry and exit while the train is temporarily in another country. Borders can also be in the "wrong" place, forcing railways into difficult terrain. 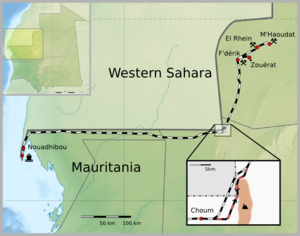 The Mauritania Railway. The inset shows the shorter route cutting through Western Sahara and the longer route within Mauritania through difficult terrain.

Highway of one state passing through another state's territory

This arrangement is less common as highways are more easily re-aligned. Examples include: