The Artaxiad dynasty or Ardaxiad dynasty (Artashessian Dynasty, Armenian: Արտաշեսյան արքայատոհմ) ruled the Kingdom of Armenia from 189 BC until their overthrow by the Romans in AD 12. Their realm included Greater Armenia, Sophene and intermittently Lesser Armenia and parts of Mesopotamia. Their main enemies were the Romans, the Seleucids and the Parthians, against whom the Armenians had to conduct multiple wars. During this period, Armenian culture experienced considerable Hellenistic influence. 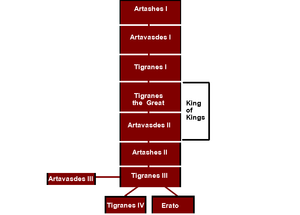 According to the geographer Strabo, Artaxias and Zariadres were two satraps of the Seleucid Empire, who ruled over the provinces of Greater Armenia and Sophene respectively. After the Seleucid defeat at the Battle of Magnesia in 190 BC, they revolted and declared their independence, with Artaxias (Armenian: Արտաշես) becoming the first king of the Artaxiad dynasty of Armenia in 188. However, some Armenian scholars believe that Artaxias and Zariadres were not foreign generals but local figures related to the previous Orontid dynasty, as their Irano-Armenian (and not Greek) names would indicate.[1]

According to Encyclopaedia Iranica, Artaxiad dynasty has now been identified as a branch of the earlier Eruandid dynasty of Iranian origin attested as ruling in Armenia from at least the 5th century BCE[2]

Consolidation of Armenian lands under Artaxias

Artaxias is regarded as one of the most important kings in Armenian history. He presented himself as a legitimate descendant of Orontids, although it is unknown if he was in fact related to that dynasty. In the beginning of his rule, parts of the Armenian Highlands with Armenian speaking populations remained under the rule of neighbouring states. Artaxias made the reunification of those lands under his domain a priority. Greek geographer and historian Strabo recounts the conquests of Artaxias towards West, East, North and South as well as stating that the population of those territories was Armenian speaking. Strabo, Geography, book 11, chapter 14:

According to report, Armenia, though a small country in earlier times, was enlarged by Artaxias and Zariadris, who formerly were generals of Antiochus the Great, but later, after his defeat, reigned as kings (the former as king of Sophene, Acisene, Odomantis, and certain other countries, and the latter as king of the country round Artaxata), and jointly enlarged their kingdoms by cutting off for themselves parts of the surrounding nations,--I mean by cutting off Caspiane and Phaunitis and Basoropeda from the country of the Medes; and the country along the side of Mt. Paryadres and Chorsene and Gogarene, which last is on the far side of the Cyrus River, from that of the Iberians; and Carenitis and Xerxene, which border on Lesser Armenia or else are parts of it, from that of the Chalybians and the Mosynoeci; and Acilisene and the country round the Antitaurus from that of the Cataonians; and Taronitis from that of the Syrians; and therefore they all speak the same language.

According to Strabo and Plutarch, Artaxias also founded the Armenian capital Artaxata with the aid of the Carthaginian general Hannibal who was being sheltered from the Romans within Artaxias' court. The population of the previous Orontid capital of Ervandashat was transferred to Artaxata. Over a dozen stone boundary markers have been discovered on the territory of modern Armenia from the time of the reign of Artaxias with Aramaic inscriptions, before their discovery the existence of these stones was attested by Moses of Khorene. In these inscriptions Artaxias claims descent from the Orontid Dynasty: King Artaxias, the son of Orontid Zariadres.

Though Greater Armenia had only been superficially affected by the conquests of Alexander the Great, the country began to be influenced by the Hellenistic world under the Orontids in the 3rd century and this process reached its peak under the Artaxiads, particularly King Tigranes the Great. During this time, Armenia incorporated many Greek elements into its culture. This is shown by the contemporary Armenian coins (which had first appeared under the Orontids). They clearly follow Greek models and have inscriptions in the Greek language. Some coins describe the Armenian kings as "Philhellenes" ("lovers of Greek culture"). Knowledge of Greek in Armenia is also evidenced by surviving parchments and rock inscriptions. Cleopatra, the wife of Tigranes the Great, invited Greeks such as the rhetor Amphicrates and the historian Metrodorus of Scepsis to the Armenian court, and - according to Plutarch - when the Roman general Lucullus seized the Armenian capital Tigranocerta, he found a troupe of Greek actors who had arrived to perform plays for Tigranes.[3] Tigranes' successor Artavasdes II even composed Greek tragedies himself. Nevertheless, Armenian culture still retained a strong Iranian element, particularly in religious matters.[4]

The Armenian empire under Tigranes the Great

During the reign of Tigranes the Great (95–55 BC), the kingdom of Armenia was at the zenith of its power and briefly became the most powerful state to the Roman east. Artaxias and his followers had already constructed the base upon which Tigranes built his empire. Despite this fact, the territory of Armenia, being a mountainous one, was governed by nakharars who were largely autonomous from the central authority. Tigranes unified them in order to create internal security in the kingdom. The borders of Armenia stretched from the Caspian Sea to the Mediterranean Sea. At that time, the Armenians had become so expansive, that the Romans and Parthians had to join forces in order to beat them. Tigranes found a more central capital within his domain and named it Tigranocerta.

Large chunks of lands were taken from Parthians, who were forced to sign a treaty of friendship with Tigranes. Iberia, Albania, and Atropatene also lost territories and the remainder of their Kingdoms became vassal states. The Greeks within the Seleucid Empire offered Tigranes the Seleucid crown in 83, after which the Armenian empire reached as far south as modern Acre, Israel resulting in a conflict with Hasmoneans.

Roman involvement in Asia Minor brought Tigranes' empire to an end. Tigranes had allied himself with Rome's great enemy Mithridates the Great, King of Pontus, and during the Third Mithridatic War, in 69 BC, a Roman army led by Lucullus invaded the Armenian empire and routed Tigranes outside Tigranocerta. In 66, Lucullus' successor Pompey finally forced Tigranes to surrender. Pompey reduced Armenia to its former borders but allowed Tigranes to retain the throne as an ally of Rome. From now on, Armenia would become a buffer state between the two competing empires of the Romans and the Parthians.

Tigranes' heir Artavasdes II maintained the alliance with Rome, giving helpful advice to the Roman general Marcus Licinius Crassus on his campaign against the Parthians – advice which went unheeded and led to Crassus' disastrous defeat at the Battle of Carrhae. When Mark Antony became ruler of Rome's eastern provinces, he began to suspect the loyalty of Artavasdes, who had married his sister to the heir to the Parthian throne. In 35, Antony invaded Armenia and sent Artavasdes into captivity in Egypt, where he was later executed. Antony installed his own six-year-old son by Cleopatra, Alexander Helios, on the throne of Armenia. Artavasdes' son Artaxias II gained help from the Parthians, seized the throne back and massacred the Roman garrisons in Armenia, but after a reign of ten years he was murdered. The kingdom broke down into a civil war between pro-Roman and pro-Parthian parties until it decisively became a Roman protectorate under the emperor Augustus. The Artaxiad dynasty petered out in chaos and it was a considerable time before the Arsacid dynasty emerged as their undisputed successors.[5]

(Note: Some dates are approximate or doubtful).[6]