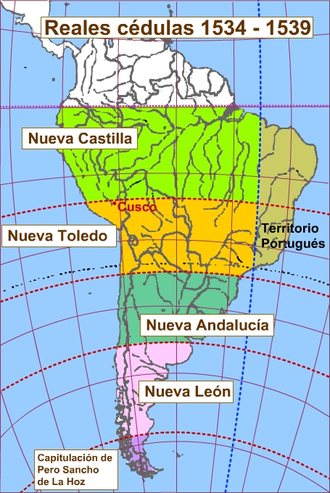 The adelantado grants of Charles V prior to the establishment of the Viceroyalty of Peru.

New Andalusia Governorate (1534−1542) was one of the colonial governorates of the Spanish Empire, located in southern South America.

The governorate was created as one of King Charles V's grants of 1534, establishing the adelantado Pedro de Mendoza as its first governor, captain general, and chief justice. The territory was described as extending 200 leagues down the Pacific coast from Diego de Almagro's grant of New Toledo, but was understood to involve the exploration, pacification, and settlement of the Río de la Plata along the Atlantic.

While in theory the Governorate of New Andalusia included all of present-day Uruguay and Paraguay and large segments of Chile, Argentina and Brazil, the adelantados were only able to effectively colonize the Paraná River, losing other territories to subsequent grants.