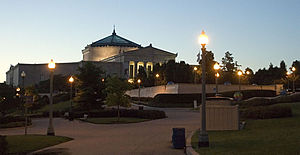 Shedd Aquarium in the Museum Campus at dawn.

Museum Campus is a 57-acre (23 ha) park in Chicago that sits alongside Lake Michigan and encompasses five of the city's most notable attractions: the Adler Planetarium, America's first planetarium; the Shedd Aquarium; the Field Museum of Natural History; Soldier Field, home of the NFL Chicago Bears football team; and the Lakeside Center of McCormick Place. Museum Campus is being expanded to include the Lucas Museum of Narrative Art by legendary filmmaker George Lucas. Museum Campus sits adjacent to Northerly Island along the waterfront. 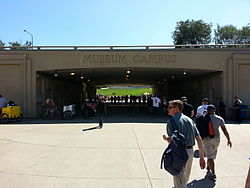 The Museum Campus was created to transform the vicinity of three of the city's most notable museums -the Adler Planetarium, the Shedd Aquarium, and the Field Museum of Natural History- which are among the city's top cultural draws, along with Soldier Field stadium into a scenic pedestrian-friendly area. The area is landscaped with greenery and flora as well as jogging paths and walkways. A picturesque promenade along Solidarity Drive, an isthmus, links Northerly Island to the mainland. The drive itself is lined with a number of grand bronze monuments commemorating Kościuszko, Havliček, and Nicholas Copernicus, the last of which is a replica of a famous 19th-century work in Warsaw by Danish sculptor Bertel Thorvaldsen.[citation needed]

The Museum Campus opened on June 4, 1998, when the northbound lanes of Lake Shore Drive were moved west of Soldier Field following the route of the expressway's southbound lanes. By removing the roadway which bisected the area, Museum Campus was created into a green space for the enjoyment of both residents and tourists. In 2014, a consortium of museums in or near the University of Chicago, formed Museum Campus South.[1][2]