From Infogalactic: the planetary knowledge core
Jump to: navigation, search
This article is about the Chicago community area. For the adjacent Cook County village, see Riverdale, Illinois.

Riverdale, one of the 77 official community areas of Chicago, Illinois, is located on the city's far south side.

The town of Riverdale is at the far south end of Chicago extending beyond the Chicago boundary of 138th Street to 144th Street. The town hall is at 157 West 144th Street. The University of Chicago sociology study designates Riverdale as one of the 77 Chicago communities and Wiki has two sites: one for the Cook County community and this site for the all inclusive town of Riverdale. According to the University of Chicago map, Riverdale extends from 115th Street to the city boundary of 138th street and on the east, the Bishop Ford Freeway west to the Illinois Central Railroad tracks. 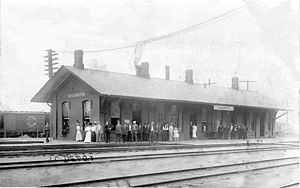 The first non-native settler in the area was David Perriam who, in 1837, claimed land north of the horseshoe bend in the Calumet River in an area referred to as Wildwood. This land was later acquired by Colonel James H. Bowen who was instrumental in construction of the Cal-Sag canal connecting the Calumet River to the Illinois River. After he lost his home in the Chicago Fire, Bowen moved to Wildwood and made this a palatial summer home where Chicago's elite gathered in the 1870s.[2] Another early resident, George Dolton, settled near the Calumet River by the Chicago-Thornton Road (today's Indiana Avenue). He operated a chain ferry across the river. Levi Osterhoudt operated a tavern/road house at 133rd and Thornton Road from 1840 and the area became known as the Riverdale Crossing. In 1842, Dolton and Osterhoudt replaced the ferry with a toll bridge and called it the "Dolton Bridge.[3]

In 1849, the Dolton family leased 50 acres of farmland on the north bank of the Calumet River to John Ton, a Dutch immigrant who was one of the founding fathers of the new settlement of Roseland to the north. Ton was an abolitionist who operated a station on the Underground Railroad from this site until the Civil War.[4]

The north end of Riverdale is more closely aligned with Roseland both historically and culturally. In 1852, the Illinois Central Railroad opened a station at 115th Street where the Michigan Central Railroad joined the ICRR tracks calling it the Calumet Station, later renamed, "Kensington" after the palace and gardens in London.

In 1880, George Pullman began constructing his model city just north of 115th Street. At Kensington, a small settlement of stores, boarding houses and saloons sprang up to serve the construction crews and immigrant tradesmen who came to work at the Pullman shops. The notorious saloons prompted the modest Dutchmen of nearby Roseland to nickname Kensington, "Bumtown." Riverdale was annexed into Chicago in 1889.

In the aftermath of the Pullman Strike in 1894, hiring practices in the area opened up bringing many new industries to the area. Italian Americans flourished working not only at Pullman but Illinois Terra Cotta and other nearby industries.[5] The Pullman Land Association operated the Pullman Farm on the west bank of Lake Calumet. The farm was fertilized by sewage waste from the town of Pullman. The Calumet Paint Company started operations in an abandoned church between Pullman and the lake. It was later acquired by the Sherwin-Williams Company and grew to one of the largest paint factories in America. Other employers in the area included the Swift and Knickerbocker ice plants, Chicago Drop Forge, Acme Steel, Riverdale Distillery and construction material companies providing bricks and lumber to the area.

By the 1940s, more people worked in Riverdale than lived there but that was about to change. South of 138th Street, the subdivisions of Ivanhoe and Highlawn, started construction in the 1930s, saw rapid growth after the War. In 1945, the Chicago Housing Authority began the massive effort to build low cost housing for veterans returning from the War. Altgeld Gardens, the Philip Murray Homes and the Pacesetter section west of the Calumet River provided low rent and Section 8 housing. Riverdale's population grew to over 15,000 by 1970.[6] Services were over taxed or completely lacking with city water and sewer service finally connected in 1980. Carver High School at 131st and Doty Road transitioned into a military school, and efforts to shift the school population to nearby Roseland have led to sporadic gang violence.[7]

In 1953, Illinois established the Chicago Regional Port District to coordinate with the opening of the Saint Lawrence Seaway to deep water ships. The Port of Chicago was moved from Navy Pier to Lake Calumet. The lake was converted to a deep water turning basin linked to huge grain elevators, petroleum storage tanks, and public and rail terminals. The port opened to great fanfare in 1958 but never fully realized its expected potential.

In the 1960s and 1970s, the area's industries began to close and the population became dominated by African Americans. The Pullman shops, once the employment center of the area, produced its last car in 1981. Acme Steel employed almost 1,200 workers in 1929 has been shuttered several times. The Sherwin Williams paint factory closed in 1980 and was torn down. In Kensington, Saint Salomea Church, a vestige of European immigrants, now houses the Salem Baptist congregation. In 1998, several precincts in Kensington voted to ban the sale of alcohol making the once famous "Bumtown" dry.

A look at today's landscape shows over half of Riverdale's area is made up of the water reclamation plant, rail yards, land fills and industrial sites.[8] South of Kensington is the massive Metropolitan Water Reclamation District of Greater Chicago sewage treatment facility north of 130th Street. Between 130th Street and the Calumet River is the Altgeld-Murray housing complex. East of the housing project to the Bishop Ford Expressway is the Beaubien Forest Preserve. South of the Calumet River is mixed residential and commercial area.

In 1990 an approximated 63% of households in Riverdale lived in poverty.[9]