Giovanni Battista Cybo (or Cibo) was born in Genoa of Greek ancestry,[1][2][3][4][5] the son of Arano Cybo or Cibo (c. 1375-c. 1455) and his wife Teodorina de Mari (c. 1380-), of an old Genoese family. His paternal grandparents were Maurizio Cybo and his wife Seracina Marocelli. Arano Cybo was a senator in Rome under Pope Calixtus III (1455–58). Giovanni Battista's early years were spent at the Neapolitan court, and subsequently he went to Padua and Rome for his education.

In Rome he became a priest in the retinue of cardinal Calandrini, half-brother to Pope Nicholas V (1447–55). In 1467, he was made Bishop of Savona by Pope Paul II, but exchanged this see in 1472 for that of Molfetta in south-eastern Italy. In 1473, with the support of Giuliano Della Rovere, later Pope Julius II, he was made cardinal by Pope Sixtus IV, whom he succeeded on 29 August 1484 as Pope Innocent VIII.[6]

The papal conclave of 1484 was riven with faction, while gangs rioted in the streets. Cardinal Giuliano did not have sufficient votes at the conclave to be elected, so he turned his energies towards the election of Cybo, whom he was confident that he could control.[citation needed]

Shortly after his coronation Innocent VIII addressed a fruitless summons to Christendom to unite in a crusade against the Turks. A protracted conflict with King Ferdinand I of Naples was the principal obstacle. Ferdinand's oppressive government led in 1485 to a rebellion of the aristocracy, known as the Conspiracy of the Barons, which included Francesco Coppola and Antonello Sanseverino of Salerno and was supported by Pope Innocent VIII. Innocent excommunicated him in 1489 and invited King Charles VIII of France to come to Italy with an army and take possession of the Kingdom of Naples, a disastrous political event for the Italian peninsula as a whole. The immediate conflict was not ended until 1494, after Innocent VIII's death.

Relations with the Ottoman Empire

Bayezid II ruled as Sultan of the Ottoman Empire from 1481 to 1512. His rule was contested by his brother Cem who sought the support of the Mamluks of Egypt. Defeated by his brother's armies, Cem sought protection from the Knights of St. John in Rhodes. Prince Cem offered perpetual peace between the Ottoman Empire and Christendom. However, the sultan paid the Knights a large amount to keep Cem captive. Cem was later sent to the castle of Pierre d'Aubusson in France. Sultan Bayezid sent a messenger to France and requested Cem to be kept there; he agreed to make an annual payment in gold for his brother's expenses.

In March 1489 Cem was transferred to the custody of Innocent VIII. Cem's presence in Rome was useful because whenever Bayezid intended to launch a military campaign against the Christian nations of the Balkans, the Pope would threaten to release his brother. In exchange for maintaining the custody of Cem, Bayezid paid Innocent VIII 120,000 crowns, a relic of the Holy Lance, and an annual fee of 45,000 ducats.[7] Cem died in Capua on February 25, 1495, while on a military expedition under the command of King Charles VIII of France to conquer Naples .

"It has recently come to our ears, not without great pain to us, that in some parts of upper Germany, [...] Mainz, Köln, Trier, Salzburg, and Bremen, many persons of both sexes, heedless of their own salvation and forsaking the catholic faith, give themselves over to devils male and female, and by their incantations, charms, and conjurings, and by other abominable superstitions and sortileges, offences, crimes, and misdeeds, ruin and cause to perish the offspring of women, the foal of animals, the products of the earth, the grapes of vines, and the fruits of trees, as well as men and women, cattle and flocks and herds and animals of every kind, vineyards also and orchards, meadows, pastures, harvests, grains and other fruits of the earth; [...]"[8]

The bull was written in response to the request of Dominican Heinrich Kramer for explicit authority to prosecute witchcraft in Germany, after he was refused assistance by the local ecclesiastical authorities,[9] who disputed his authority to work in their dioceses. Some scholars view the bull as "clearly political", motivated by jurisdictional disputes between the local German Catholic priests and clerics from the Office of the Inquisition who answered more directly to the pope.[10] 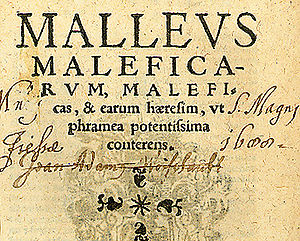 Kramer would later write the polemic Malleus Maleficarum in 1486, in which he stated that witchcraft was to blame for bad weather. Both the papal letter appended to the work and the supposed endorsement of Cologne University for it are problematic. The letter of Innocent VIII is not an approval of the book to which it was appended, but rather a charge to inquisitors to investigate diabolical sorcery and a warning to those who might impede them in their duty, that is, a papal letter in the by then conventional tradition established by John XXII and other popes through Eugenius IV and Nicholas V (1447–55).[11]

Also in 1487, Innocent issued a bull for the extermination of the Waldensians (Vaudois), offering plenary indulgence to all who should engage in the Crusade against them. Alberto de' Capitanei, archdeacon of Cremona, responded to the bull by organizing a crusade to fulfill its order and launched an offensive in the provinces of Dauphiné and Piedmont. Charles I, Duke of Savoy eventually interfered to save his territories from further confusion and promised the Vaudois peace, but not before the offensive had devastated the area and many of the Vaudois fled to Provence and south to Italy. The noted theologian Angelo Carletti di Chivasso, whom Innocent in 1491 appointed asa Apostolic Nuncio and Commissary, conjointly with the Bishop of Mauriana, was involved in reaching the peaceful agreement between Catholics and Waldensians.[12]

In 1486, Innocent VIII was persuaded that at least thirteen of the 900 theses of Giovanni Pico della Mirandola theses were heretical, and the book containing the theses was interdicted.[13]

In Rome he built for summer use the Belvedere of the Vatican, on an unarticulated slope above the Vatican Palace, which his successor would turn into the Cortile del Belvedere. In season, he hunted at Castello della Magliana, which he enlarged. Constantly confronted with a depleted treasury, he resorted to the objectionable expedient of creating new offices and granting them to the highest bidders.[6] The fall of Granada in January 1492, was celebrated in the Vatican and Innocent granted Ferdinand II of Aragon the epithet "Catholic Majesty."

Minnich (2005) notes that the position of Renaissance popes towards slavery, a common institution in contemporary cultures, varied. Minnich states that those who allowed the slave trade did so in the hope of gaining converts to Christianity.[14] In the case of Innocent he permitted trade with Barbary merchants in which foodstuffs would be given in exchange for slaves who could then be converted to Christianity.[14]

In July 1492 Innocent fell into a fever. He was said to have been given the world's first blood transfusion by his Jewish physician Giacomo di San Genesio, who had him drink the blood of three 10-year-old boys. The boys subsequently died. The evidence for this story, however, is unreliable and may have been motivated by anti-semitism. Innocent VIII died himself on the 25th of July.[17]

Mystery over his tomb

A mysterious inscription on his tomb in Saint Peter in Rome states: “Nel tempo del suo Pontificato, la gloria della scoperta di un nuovo mondo” (transl. "During his Pontificate, the glory of the discovery of a new world."). The fact is that he died seven days before the departure of Christopher Columbus for his supposedly first voyage over the Atlantic, raising speculations that Columbus actually traveled before the known date and re-discovered the Americas for the Europeans before the supposed date of October 12, 1492. The Italian historian it, in his book "Cristoforo Colombo e il Papa tradito" (transl. "Christopher Columbus and the betrayed Pope") is convinced of this after having studied Columbus's papers for over 25 years.[18]

Innocent had two illegitimate children born before he entered the clergy[6] "towards whom his nepotism had been as lavish as it was shameless."[19] In 1487 he married his elder son Franceschetto Cybo (d. 1519) to Maddalena de' Medici (1473–1528), the daughter of Lorenzo de' Medici, who in return obtained the cardinal's hat for his thirteen-year-old son Giovanni, later Pope Leo X. His daughter Teodorina Cybo married Gerardo Usodimare and had a daughter. Savonarola chastised him for his worldly ambitions.[20]