Clovis (Latin: Chlodovechus; reconstructed Frankish: *Hlōdowig;[1] c. 466 – November 27, 511)[2] was the first king of the Franks to unite all of the Frankish tribes under one ruler, changing the form of leadership from a group of royal chieftains to rule by a single king and ensuring that the kingship was passed down to his heirs.[3] He is considered to have been the founder of the Merovingian dynasty, which ruled the Frankish kingdom for the next two centuries.

Clovis was the son of Childeric I, a Merovingian king of the Salian Franks, and Basina, a Thuringian princess. In 481, at the age of fifteen,[4] Clovis succeeded his father. He conquered the remaining rump state of the Western Roman Empire at the Battle of Soissons (486), and by his death in 511 he had conquered much of the northern and western parts of what had formerly been Roman Gaul.

Clovis is important in the historiography of France as "the first king of what would become France".[5] His name is Germanic, composed of the elements hlod ("fame") and wig ("combat"), and is the origin of the later French given name Louis, borne by 18 kings of France. Dutch, the most closely related modern language to Frankish, reborrowed the name as Lodewijk from German in the 12th century.[6]

Clovis is also significant due to his conversion to Christianity in 496, largely at the behest of his wife, Clotilde, who would later be venerated as a saint for this act, celebrated today in both the Roman Catholic Church and Eastern Orthodox Church. Clovis was baptized on Christmas Day in 508.[7] The adoption by Clovis of Catholicism (as opposed to the Arianism of most other Germanic tribes) led to widespread conversion among the Frankish peoples, to religious unification across what is now modern-day France, Belgium and Germany, and three centuries later to Charlemagne's alliance with the Bishop of Rome and in the middle of the 10th century under Otto I the Great to the consequent birth of the early Holy Roman Empire.

Numerous small Frankish kingdoms existed during the 5th century. The Salian Franks were the Frankish tribe that after 274 had occupied the area south of the lower Rhine known as Toxandria, roughly the current province of North Brabant in the current Netherlands and the provinces of Antwerp and Flemish Brabant in current Belgium. After the collapse of Roman power in the last days of 406 the Salian Franks had expanded to the area south of the military highway Boulogne-Cologne. The powerbase of Clovis's father was the area around Tournai, in the current province of Hainault, along the modern frontier between France and Belgium.

Upon the death of his father, Merovech in 457 Childeric I, Clovis' father, became king of the subgroup of the Salian Franks based around Tournai. In 463 he fought in conjunction with Aegidius, the magister militum of northern Gaul, to defeat the Visigoths in Orléans. Childeric died in 481 and was buried in Tournai; Clovis succeeded him as king, aged just 15. 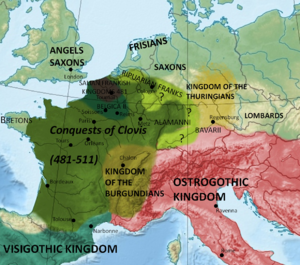 Under Clovis, the Salian Franks came to dominate their neighbours, initially aided by the association with Aegidius. Historians believe that Childeric and Clovis were both commanders of the Roman military in the Province of Belgica Secunda and were subordinate to the magister militum.[8] Clovis turned against the Roman commanders, however, defeating the Gallo-Roman ruler, and son of Aegidius, Syagrius in the Battle of Soissons (486), considered the end of Western Roman rule outside of Italy.[9] Clovis then had the Frankish king Chararic imprisoned and executed. A few years later, he killed Ragnachar, the Frankish king of Cambrai, along with his brothers. Another victory followed in 491 over a small group of Thuringians to the east. By this time Clovis had conquered all the Frankish kingdoms to the west of the River Maas, except for the Ripuarian Franks. He secured an alliance with the Ostrogoths through the marriage of his sister Audofleda to their king, Theodoric the Great. With the help of the Ripuarian Franks he narrowly defeated the Alamanni in the Battle of Tolbiac in 496. He made Paris his capital[10] and established an abbey dedicated to Saints Peter and Paul on the south bank of the Seine.[11] 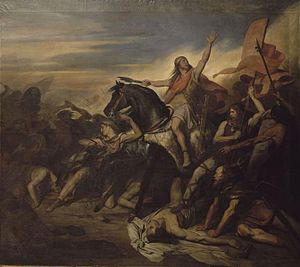 Clovis I leading the Franks to victory in the Battle of Tolbiac, in Ary Scheffer's 19th-century painting

In 500 Clovis fought a battle with the Burgundian kingdom at Dijon but was unable to subdue them. He gained the support of the Armoricans (Alans, Gallo Romans, Britons) in the following years, for they assisted him in defeating the Visigothic kingdom of Toulouse in the Battle of Vouillé in 507, eliminating Visigothic power in Gaul. The battle added most of Aquitaine to Clovis' kingdom[10] and resulted in the death of the Visigothic king Alaric II.

According to Gregory of Tours, following the Battle of Vouillé, the Byzantine Emperor Anastasius I granted Clovis the title of consul. Since Clovis' name does not appear in the consular lists, it is likely he was granted a suffect consulship. Gregory of Tours recorded the systematic campaigns following Vouillé to eliminate the other Frankish "reguli", or sub-kings, including Sigobert the Lame and his son Chlodoric the Parricide; Chararic, another king of the Salian Franks; Ragnachar of Cambrai, his brother Ricchar, and their brother Rignomer of Le Mans. Clovis became the first king of all Franks in 508,[citation needed] after he had conquered Cologne, capital of the Ripuarian Franks.

Clovis was born a pagan but later became interested in converting to Arian Christianity, whose followers believed that Jesus was a distinct and separate being from God the Father, both subordinate to and created by Him. This contrasted with Catholicism, whose followers believe that God the Father, Jesus and the Holy Spirit are three persons of one being (consubstantiality). While the theology of the Arians was declared a heresy at the First Council of Nicea in 325, the missionary work of the bishop Ulfilas converted the pagan Goths to Arian Christianity in the 4th century. By the time of the ascension of Clovis, Gothic Arians dominated Christian Gaul, and Catholics were the minority. This included his wife, Clotilde, a Burgundian princess who was a Catholic in spite of the Arianism that surrounded her at court.[12]

Clotilde evangelized Clovis to convert to Catholicism, which he initially resisted. Clotilde had wanted her son to be baptized, but Clovis refused to allow it, so Clotilde had the child baptized without Clovis's knowledge. Shortly after his baptism, their son died, and his death further strengthened Clovis's resistance to conversion. Clotilde also had their second son baptized without her husband's permission, and this son got very ill and nearly died after his baptism.[13] Clovis eventually converted following the Battle of Tolbiac on Christmas Day 508[14][15] in a small church in the vicinity of the subsequent Abbey of Saint-Remi in Reims; a statue of him being baptized by Saint Remigius can still be seen there. The details of this event have been passed down by Gregory of Tours who recorded them many years later in the 6th century.

The king's Catholic baptism was of immense importance in the subsequent history of Western and Central Europe in general, for Clovis expanded his dominion over almost all of Gaul. Catholicism did offer certain advantages to Clovis as he fought to distinguish his rule among many competing power centers in Western Europe. His conversion to the Roman Catholic form of Christianity served to set him apart from the other Germanic kings of his time, such as those of the Visigoths and the Vandals, who had converted from Germanic paganism to Arian Christianity. His embrace of the Roman Catholic faith may have also gained him the support of the Catholic Gallo-Roman aristocracy in his later campaign against the Visigoths, which drove them from southern Gaul in 507 and resulted in a great many of his people converting to Catholicism as well.[16]

Nevertheless, Bernard Bachrach has argued that his conversion from Frankish paganism alienated many of the other Frankish sub-kings and weakened his military position over the next few years. In the "interpretatio romana", Saint Gregory of Tours gave the Germanic gods that Clovis abandoned the names of roughly equivalent Roman gods, such as Jupiter and Mercury.[17] Taken literally, such usage would suggest a strong affinity of early Frankish rulers for the prestige of Roman culture, which they may have embraced as allies and federates of the Empire during the previous century.[citation needed] William Daly, more directly assessing Clovis' allegedly barbaric and pagan origins,[18] was obliged to ignore the Gregory of Tours version and base his account on the scant earlier sources, a sixth-century "vita" of Saint Genevieve and letters to or concerning Clovis from bishops and Theodoric.

Clovis and his wife were buried in the Abbey of St Genevieve (St. Pierre) in Paris; the original name of the church was the Church of the Holy Apostles.[19] 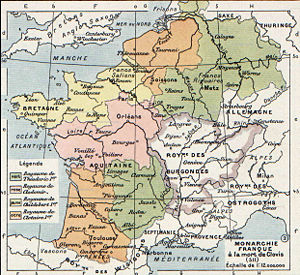 Frankish territories at the time of Clovis' death

Under Clovis, the first codification of the Salian Frank law took place. The Roman Law was written with the assistance of Gallo-Romans to reflect the Salic legal tradition and Christianity, while containing much from Roman tradition. The Roman Law lists various crimes as well as the fines associated with them.[20] 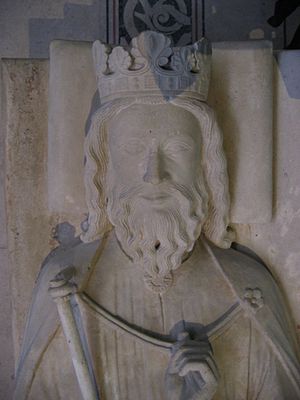 Shortly before his death, Clovis called a synod of Gallic bishops to meet in Orléans to reform the Church and create a strong link between the Crown and the Catholic episcopate. This was the First Council of Orléans. Thirty-three bishops assisted and passed 31 decrees on the duties and obligations of individuals, the right of sanctuary, and ecclesiastical discipline. These decrees, equally applicable to Franks and Romans, first established equality between conquerors and conquered.

Clovis I is traditionally said to have died on 27 November 511; however, the Liber Pontificalis suggests that he was still alive in 513, so the date of his death is not known for certain.[21] After his death, Clovis was laid to rest in the Abbey of St Genevieve in Paris. His remains were relocated to Saint Denis Basilica in the mid- to late-18th century.

When Clovis died, his kingdom was partitioned among his four sons, Theuderic, Chlodomer, Childebert, and Clotaire. This partition created the new political units of the Kingdoms of Rheims, Orléans, Paris and Soissons, and inaugurated a tradition that would lead to disunity lasting until the end of the Merovingian dynasty in 751. The disunity continued under the Carolingians until, after a brief unity under Charlemagne, the Franks splintered into distinct spheres of cultural influence that coalesced around Eastern and Western centers of royal power. These later political, linguistic, and cultural entities became the Kingdom of France, the myriad German States, and the semi-autonomous kingdoms of Burgundy and Lotharingia.

The legacy of Clovis's conquests, a Frankish kingdom that included most of Roman Gaul and parts of western Germany, survived long after his death.[22] To the French people, he is the founder of France.

Detracting, perhaps, from this legacy, is his aforementioned division of the state. This was done not along national or even largely geographical lines, but primarily to assure equal income amongst his sons after his death. While it may or may not have been his intention, this division was the cause of much internal discord in Gaul. This precedent led in the long run to the fall of his dynasty, for it was a pattern repeated in future reigns.[23] Clovis did bequeath to his heirs the support of both people and Church such that, when the magnates were ready to do away with the royal house, the sanction of the Pope was sought first.

By his conversion to Christianity he made himself the ally of the papacy and its protector as well as that of the people, who were mostly Catholics.

Ancestors of Clovis I