From Infogalactic: the planetary knowledge core
Jump to: navigation, search
For the Burgundian king ruling 473–474, see Chilperic I of Burgundy. 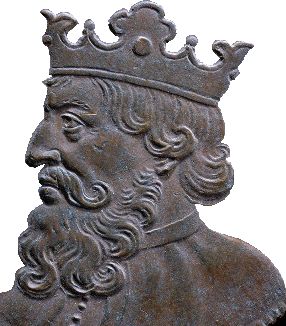 Portrait of Chilperic I on a bronze medal of 1720. 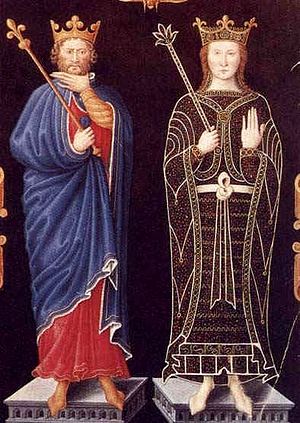 Chilperic I (c. 539 – September 584) was the king of Neustria (or Soissons) from 561 to his death. He was one of the sons of the Frankish king Clotaire I and Queen Aregund.

Immediately after the death of his father in 561, he endeavoured to take possession of the whole kingdom, seized the treasure amassed in the royal town of Berny and entered Paris. His brothers, however, compelled him to divide the kingdom with them, and Soissons, together with Amiens, Arras, Cambrai, Thérouanne, Tournai, and Boulogne fell to Chilperic's share. His eldest brother Charibert received Paris, the second eldest brother Guntram received Burgundy with its capital at Orléans, and Sigebert received Austrasia. On the death of Charibert in 567, his estates were augmented when the brothers divided Charibert's kingdom among themselves and agreed to share Paris.

Not long after his accession, however, he was at war with Sigebert, with whom he would long remain in a state of—at the very least—antipathy. Sigebert defeated him and marched to Soissons, where he defeated and imprisoned Chilperic's eldest son, Theudebert. The war flared in 567, at the death of Charibert. Chilperic immediately invaded Sigebert's new lands, but Sigebert defeated him. Chilperic later allied with Guntram against Sigebert (573), but Guntram changed sides and Chilperic again lost the war.

When Sigebert married Brunhilda, daughter of the Visigothic sovereign in Spain (Athanagild), Chilperic also wished to make a brilliant marriage. He had already repudiated his first wife, Audovera, and had taken as his concubine a serving-woman called Fredegund. He accordingly dismissed Fredegund, and married Brunhilda's sister, Galswintha. But he soon tired of his new partner, and one morning Galswintha was found strangled in her bed. A few days afterwards Chilperic married Fredegund.

This murder was the cause of more long and bloody wars, interspersed with truces, between Chilperic and Sigebert. In 575, Sigebert was assassinated by Fredegund at the very moment when he had Chilperic at his mercy. Chilperic then made war with the protector of Sigebert's wife and son, Guntram. Chilperic retrieved his position, took from Austrasia Tours and Poitiers and some places in Aquitaine, and fostered discord in the kingdom of the east during the minority of Childebert II.

In 578, Chilperic sent an army to fight the Breton ruler Waroch II of the Bro-Wened along the Vilaine. The Frankish army consisted of units from the Poitou, Touraine, Anjou, Maine, and Bayeux. The Baiocassenses (men from Bayeux) were Saxons and they in particular were routed by the Bretons.[1] The armies fought for three days before Waroch submitted, did homage for Vannes, sent his son as a hostage, and agreed to pay an annual tribute. He subsequently broke his oath but Chilperic's dominion over the Bretons was relatively secure, as evidenced by Venantius Fortunatus's celebration of it in a poem.

Most of what is known of Chilperic comes from The History of the Franks by Gregory of Tours. Gregory detested Chilperic, calling him "the Nero and Herod of his time" (VI.46): he had provoked Gregory's wrath by wresting Tours from Austrasia, seizing ecclesiastical property, and appointing as bishops counts of the palace who were not clerics. Gregory also objected to Chilperic's attempts to teach a new doctrine of the Trinity.[2]

Chilperic's reign in Neustria saw the introduction of the Byzantine punishment of eye-gouging. Yet, he was also a man of culture: he was a musician of some talent, and he wrote verse (modelled on that of Sedulius); he attempted to reform the Frankish alphabet; and he worked to reduce the worst effects of Salic law upon women.

In September 584, while returning from a hunting expedition to his royal villa of Chelles, Chilperic was stabbed to death by an unknown assailant.

Chilperic I's first marriage was to Audovera. They had five children:

His short second marriage to Galswintha produced no children.

His concubinage and subsequent marriage to Fredegund in about 568 produced six more legitimate offspring:

An operetta on the subject, Chilpéric, was created by Hervé, first performed in 1864.