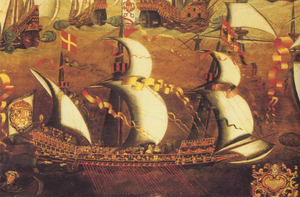 A galleass of the Spanish Armada 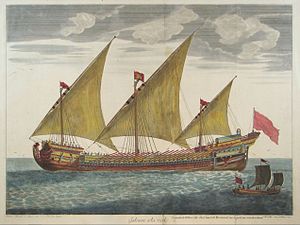 The galleass were ships developed from large merchant galleys. Converted for military use they were higher, larger and slower than regular ("light") galleys. They had up to 32 oars, each worked by up to 5 men. They usually had three masts and a forecastle and aftcastle. Much effort was made in Venice to make these galleasses as fast as possible to compete with regular galleys. The gun-deck usually ran over the rowers' heads, but there are also pictures showing the opposite arrangement.

Galleasses usually carried more sails than true galleys, and were far deadlier; a galley caught broadside lay all but helpless, since coming broadside to a galleass, as with a ship of the line, exposed an attacker to her gunfire. Relatively few galleasses were built — one disadvantage was that, being more reliant on sails, their position at the front of the galley line at the start of a battle could not be guaranteed — but they were used at the Battle of Lepanto in 1571, their firepower helping to win victory for the Holy League fleet, and some sufficiently seaworthy galleasses accompanied the Spanish Armada in 1588 (e.g. La Girona). In the 15th century a type of light galleass, called the frigate, was built in southern European countries to answer the increasing challenge posed by the north African based Barbary pirates in their fast galleys.

In the Mediterranean, with its less dangerous weather and fickle winds, both galleasses and galleys continued in use, particularly in Venice and the Ottoman Empire, long after they became obsolete elsewhere. Later, "round ships" and galleasses were replaced by galleons and ships of the line which originated in Atlantic Europe. The first Venetian ship of the line was built in 1660.

In the North Sea and western Baltic, the term refers to small commercial vessels similar to a flat-sterned herring Buss.