From Infogalactic: the planetary knowledge core
Jump to: navigation, search
For the rocks off the Cornish coast, see The Carracks. For the musician, see Paul Carrack. 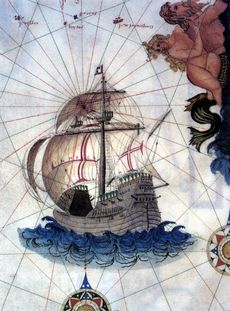 A Portuguese carrack, as depicted in a map made in 1565.

A carrack or nau was a three- or four-masted ocean-going sailing ship and was developed in the 14th and 15th centuries in Europe. Carracks were first used for European trade from the Mediterranean to the Baltic. In its most advanced forms, it was used by the Portuguese for trade with the African coast and finally with Asia and America from the 15th century into the 17th century.

With linguistic variation, these ships were called carraca or nau in Portuguese, Spanish and Genoese, caraque or nef in French, kraak in Dutch and Flemish. Originally the word carrack meant ship and was used in the Mediterranean for any large ship long before the ocean-going carrack was developed in the later 15th century. The word "carrack" probably derives from an ancient middle-eastern Akkadian word for a type of river barge.

In its most developed form, the carrack was a carvel built ocean-going ship: large enough to be stable in heavy seas, and for a large cargo and the provisions needed for very long voyages. The later carracks were square-rigged on the foremast and mainmast and lateen-rigged on the mizzenmast. They had a high rounded stern with large aftcastle, forecastle and bowsprit at the stem. As the predecessor of the galleon, the carrack was one of the most influential ship designs in history; while ships became more specialized in the following centuries, the basic design remained unchanged throughout this period.[1] 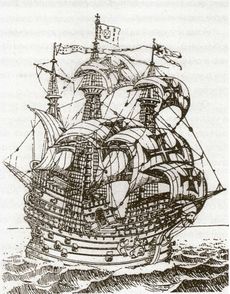 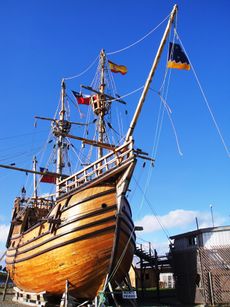 A replica of Magellan's ship Nao Victoria, one of the most famous carracks.

By the Late Middle Ages the cog, and cog-like square-rigged vessels equipped with a rudder at the stern, were widely used along the coasts of Europe, from the Mediterranean, to the Baltic. Given the conditions of the Mediterranean, galley type vessels were extensively used there, as were various two masted vessels, including the caravels with their lateen sails. These and similar ship types were familiar to Portuguese navigators and shipwrights. As the Portuguese gradually extended their trade ever further south along Africa's Atlantic coast during the 15th century, they needed a larger, more durable and more advanced sailing ships for their long oceanic ventures. Gradually, they developed their own models of oceanic carracks from a fusion and modification of aspects of the ship types they knew operating in both the Atlantic and Mediterranean, generalizing their use in the end of the century for inter-oceanic travel with a more advanced form of sail rigging that allowed much improved sailing characteristics in the heavy winds and waves of the Atlantic Ocean and a hull shape and size that permitted larger cargoes. In addition to the average tonnage naus, some large naus (carracks) were also built in the reign of John II of Portugal, but were only widespread after the turn of the century. The Portuguese carracks were usually very large ships for their time (often over 1000 tons), and having the future large naus of the India run and of the China and Japan trade, also other new types of design.

The origin of the word carrack is usually traced back through the medieval European languages to the Arabic, and from thence to the Greek κέρκουρος (kerkouros) meaning approximately "lighter (barge)" (literally, "shorn tail", a possible reference to the ship's flat stern). Its attestation in Greek literature is distributed in two closely related lobes. The first distribution lobe, or area, associates it with certain light and fast merchantmen found near Cyprus and Corfu. The second is an extensive attestation in the Oxyrhynchus corpus, where it seems most frequently to describe the Nile barges of the Ptolemaic pharaohs. Both of these usages may lead back through the Phoenician to the Akkadian kalakku, which denotes a type of river barge. The Akkadian term is assumed to be derived from a Sumerian antecedent. Sumerian antecedent A modern reflex of the word is found in Arabic and Turkish kelek "raft; riverboat".[2]

A typical three-masted carrack such as the São Gabriel had six sails: bowsprit, foresail, mainsail, mizzensail and two topsails.

From around 1515, Portugal had trade exchanges with Goa in Portuguese India, consisting of 3 to 4 carracks leaving Lisbon with silver to purchase cotton and spices in India. Out of these, only one carrack went on to Ming China in order to purchase silk, also in exchange for Portuguese silver.

From the time of the acquisition of Macau in 1557, and their formal recognition as trade partners by the Chinese, the Portuguese Crown started to regulate trade to Japan, by selling to the highest bidder the annual "Captaincy" to Japan, in effect conferring exclusive trading rights for a single carrack bound for Japan every year. That trade continued with few interruptions until 1638, when it was prohibited on the grounds that the ships were smuggling priests into Japan.

In the middle of the 16th century the first galleons were developed from the carrack. The galleon design came to replace that of the carrack although carracks were still in use as late as the early 17th century. 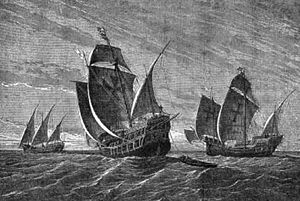 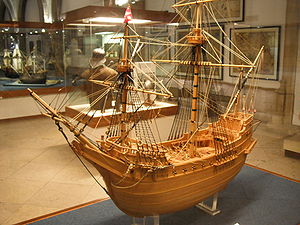 Model of the carrack Madre de Deus, in the Maritime Museum, Lisbon. Built based on another design, later in Portugal (1589), she was the largest ship in the world in her time. She had seven decks.

The word caracca and derivative words is popularly used in reference to an cumbersome individual, to an old vessel, or to a vehicle in a very bad condition.[3]