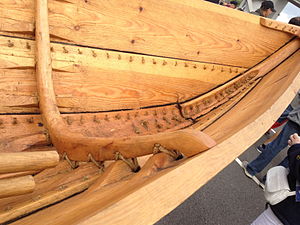 Halsnøy boat, detail of the bow.

A sewn boat is a type of wooden boat which is clinker built and held together with tendons or flexible wood, such as roots and willow branches. Sewn boat construction techniques were used in many parts of the world prior to the development of metal fasteners, and continued to be used long after that time for small boats to reduce construction costs where metal fasteners were too expensive.[1]

Although well established, the sewn boat name is somewhat misleading since it suggests textile or leather skin construction, as often found in kayaks. Some have proposed to use laced boats (Ge. geschnürte Boote) instead. A modern plywood construction method that resembles sewn boats is the stitch and glue method; in this technique plywood panels are stitched together, often with wire, and the seams are reinforced with fiberglass composite; the stitching may then be removed or may remain in place. Also related is the treenailed boat.

Sewn boats start with the construction of the skin of the boat, rather than the frame, resulting in a monocoque type of structure. Carefully shaped planks are connected at the edges, usually in the clinker style, with overlapping sections which are sewn together. As the planks are placed together, the skin begins to bend into the desired shape. The resulting structure is highly flexible. Internal framing may be added to the planks after they are sewn in, providing additional rigidity.

While wooden pegs (often called treenails) can be used to fasten thicker clinker planks, this technique only works if the planks are thick enough to hold the pegs. Because of this, large ships were often built using pegs, while smaller boats would use sewn planks.[2]

The earliest example of a sewn boat is the 40+ metres long "Solar" funerary boat on show near the Gizeh pyramid, in Egypt; it dates back from 2600 BC. The sewn construction was a natural step when coming from raft or reed boatbuilding, which dates from some thousands of years before that. In other parts of the world, the oldest sewn craft comes from North Ferriby, where one sample (called F2) carbon dates to 1930-1750 BC. Later finds include some early Greek ships. The oldest Nordic find is the Hjortspring boat in Denmark (c 300 BC). In Finland, Russia, Karelia and Estonia small sewn boats have been constructed more recently, until the 1920s in poor areas of Russia.[3]

The best known boats built with sewn construction are the various forms of Dhow native to the Red Sea, Persian Gulf, and Indian Ocean for over two thousand years.[4]