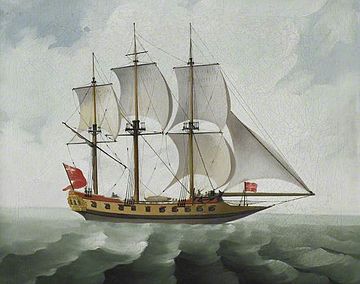 A grab was a type of ship common on the Malabar Coast in the 18th and 19th Centuries. The name comes from "ghurāb" or "ghorāb", Arabic for raven, which word came into Marathi and Konkani as "gurab". The ghurāb was originally a galley, but the type evolved.[1]

The grab combined an indigenous hull form with a pointed prow, with or without a bowsprit, combined with European rigging on two to three masts.[2] A description from 1750 states that the grabs of Angria's fleet narrowed from the middle forward and instead of a bow had the prow of a Mediterranean galley, covered with a strong deck level with the main deck but separated from it by a bulkhead. The grab pitched violently when sailing against a head sea so the prow sides were open so that water would easily run off. On the main deck under the forecastle there were two 6 or 9-pounder guns pointing forward through port-holes cut in the bulkhead and firing over the prow. The grabs then had 6 or 9-pounder guns on their broadsides.[3]

The vessel was generally of shallow draft, and broad in proportion to its length. Size could range between 150 to as much 500 tons (bm). The sail plan typically was that of a snow, or a brig.[2]

One grab of some note was the Bombay, which belonged to the Bombay Marine, the British East India Company's (EIC) navy. The Bombay Dockyard built her in 1739 of teak.[4] Bombay, of 430​80⁄94 tons (bm) and 24 guns,[4] spent much of her career convoying vessels on the coast to protect them from pirates operating from states north and south of Bombay. A fire on 29 September 1789 destroyed her in Bombay Harbour.[4]