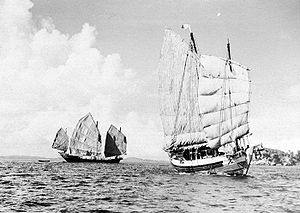 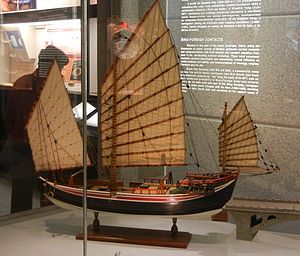 The lorcha is a type of sailing vessel having a Chinese junk rig on a Portuguese or other European style hull. Because of its hull structure, the vessel is faster and can carry more cargo than the normal Chinese junk. The advantage of a junk rig was in its ease of handling and resulting ability to be sailed with a minimal crew, together with its relatively low cost of construction. Owing to its simplicity, it was also easier to repair.

This type of vessel was developed around 1550 in Macau, then a Portuguese colony in China.[1] This hybrid type of vessel sailed faster than traditional pirate ships and it began to be used by British traders after the First Opium War.

The Vũng Tàu shipwreck is a lorcha that sunk near the Côn Đảo Islands and has been dated to about 1690.[2]

A type of lorcha sailing lighter was used formerly in Bangkok to carry rice out to ocean ships over the bar of the Chao Phraya river.[3]