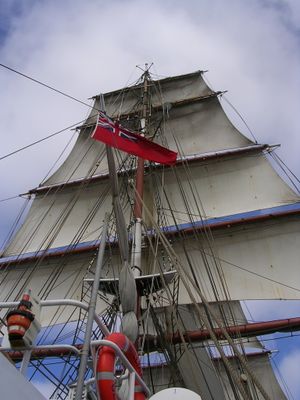 Main-mast of a square-rigged brig, with all square sails set except the course

Square rig is a generic type of sail and rigging arrangement in which the primary driving sails are carried on horizontal spars which are perpendicular, or square, to the keel of the vessel and to the masts. These spars are called yards and their tips, beyond the last stay, are called the yardarms[1]. A ship mainly so rigged is called a square-rigger.

The square rig is aerodynamically the most efficient running rig (i.e., sailing downwind), and stayed popular on ocean-going sailing ships until the end of the Age of Sail. The last commercial sailing ships, windjammers, were usually square-rigged four-masted barques. 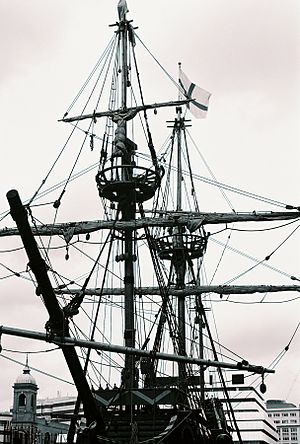 A square-rigger, with several of its lines unshipped, in Edinburgh.

Square-rigged masts may also have triangular staysails that are deployed fore-and-aft between masts. The term "square-rigged" can also describe individual, four-cornered sails suspended from the horizontal yards, and carried on either a square-rigged or a mainly fore-and-aft rigged vessel, such as one with a bermuda rigged or gaff rigged mainsail.

"Square-rigged" is also used for the uniform of a rating in the Royal Navy since 1857. It is slang and refers to anyone wearing the famous blue square collar on the shoulders and bell-bottomed trousers. The name perhaps reflects the fact that it was these men who managed the square-rigged sails. The peaked cap uniform worn by Senior Ratings (Petty Officers, Chief Petty Officers and Warrant Officers) and Officers is known colloquially as 'fore-and-aft rig'.

A mast is considered square-rigged if its lowest sail or course is square-rigged, but normally if this is the case it will have a complete set of square-rigged sails. If the course is fore-and-aft, square topsails can still be carried in front of the mast.

USS Atlanta in 1884 showing the hybrid configuration of square rig and steam. A square-rigger can be seen in the background.

In their heyday, square-rigged vessels ranged in size from small boats to full rigged ships. But this rig fell from favour to fore-and-aft gaff rigs and bermuda rigs after the development of steam power and new materials. Ocean-going sailing ships stayed mostly square-rigged.

Square rigs allowed the fitting of many small sails to create a large total sail area to drive large ships. Fore-and-aft could be sailed with fewer crew and were efficient working to windward or reaching, but creating a large total sail area required large sails, which could cause the sails and cordage to break more easily under the wind. 18th Century warships would often achieve tops speeds of 12-13 knots, although average speeds over long distances were as little as half that. Some clipper ships that had square rigs and for whom speed was critical could be much faster; for example Cutty Sark could make 17 knots. The late windjammers were as fast as the clippers, being much bigger.

Not only could a smaller sail be managed by a smaller crew but also these smaller sails constrained the impact of weapons on them. A hole from a cannonball affected only one sail's area, whilst a hole in a large sail would eventually tear the whole larger area and reduce more of the vessel's motive power.

With the development of more advanced fittings, equipment and cordage, particularly geared winches, high loads on an individual line (or rope) became less of an issue, and the focus moved to minimising the number of lines and so the size of the crew needed to handle them. This reduced running costs and also enlarged the space available in the ship for profitable cargoes. 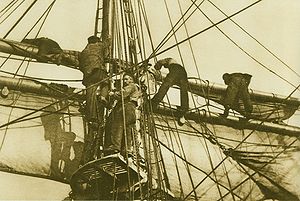 New materials also changed sail designs, particularly on hybrid vessels carrying some square-rigged sails. The low aspect ratio of square-rigged sails (usually 1/2 to 1/3) produces much drag for the lift (motive power) produced, so they have poor performance to windward compared to modern yachts, and they cannot sail as close to the wind. The Bermuda rig is the (nearly) undisputed champion of windward performance in soft sails, due to its very low drag and high lift-to-drag ratio. One advantage of square rigs is that they are more efficient when running, where the high lift to drag is irrelevant and the total drag is the most important issue. Square-rigged sails are also less prone to broaching when running than Bermuda rigs. Ocean-going vessels take advantage of e.g. the trade winds and the westerlies and are thus mostly running.

On a square-rigged mast the sails had names which indicated their vertical position on the mast. The lowest square sail was the course, the next sail up the mast was called the topsail, the next the topgallant sail. Many vessels shipped a fourth sail called the royal, above the other three, some even more on trades with light winds. Sometimes a vessel might put out studding sails which would be fixed outboard of these sails along the yards. Beginning in the mid-nineteenth century, the topsails and topgallants were each split into upper and lower sails; this allowed smaller crews to tend the sails and provided captains with a greater set of options in choosing which sails to set.

Sails are referred to by their mast and then name, e.g., "the fore mast topgallant sail", often shortened to "fore t'gallant", or historically "fore t'gar'ns'l". Where no mast is specified, the main mast is implied.

A square-rigged sail is not in fact square, but more nearly trapezoidal, being symmetrical but longer in the foot than the head. Like all sails it is three-dimensional, and its curve or belly means that its foot (lower edge) is not a straight line at all. It is fixed to a spar (the yard) along its head, and its clews (bottom corners) are controlled by sheets that are often run to blocks on the spar immediately below the sail.

All the above rigs normally carry a number of jibs and at least one spinaker (aka dolphin spinaker), and generally carry fore-and-aft staysails between the masts.