Minot Air Force Station (ADC ID: P-28 NORAD ID: Z-28) [Permanent Installation Number (PIN): 1445; Installation Location Code (ILC): QJVM]) is a closed United States Air Force General Surveillance Radar station. It is located 16.2 miles (26.1 km) south of Minot, North Dakota; on the west side of US Highway 83. It was closed in 1979. A portion of the property was reopened in 1984 as the Minot Communications Site and served until 1997.

Minot Air Force Station was part of the last batch of twenty-three radar stations constructed as part of the Air Defense Command permanent network. It was activated on 20 May 1951 at Max, ND, and declared completely operational in 1952.

The 786th Aircraft Control and Warning Squadron began operations with AN/FPS-3 and AN/FPS-5 radars in April 1952, and initially the station functioned as a Ground-Control Intercept (GCI) and warning station. As a GCI station, the squadron's role was to guide interceptor aircraft toward unidentified intruders picked up on the unit's radar scopes.

It was named Minot Air Force Station on 1 December 1953. During 1957 an AN/GPS-3 search radar saw brief use. In 1958 the original radars were replaced by AN/FPS-20 search and AN/FPS-6 height-finder sets. A second height-finder set, AN/FPS-6B, was installed during the following year.

During 1961 Minot AFS joined the Semi Automatic Ground Environment (SAGE) system, initially feeding data to DC-20 at Malmstrom AFB, Montana. After joining, the squadron was redesignated as the 786th Radar Squadron (SAGE) on 15 July 1961. The radar squadron provided information 24/7 the SAGE Direction Center where it was analyzed to determine range, direction altitude speed and whether or not aircraft were friendly or hostile.

Over the years, the equipment at the station was upgraded or modified to improve the efficiency and accuracy of the information gathered by the radars. In early 1979 the Air Force announced that the station would be closing due to what was called "redundancies with more strategically located radars".[1] On 29 September 1979 the 786th Radar Squadron was inactivated and the station was closed.

In 1984, a portion of the station was reopened by the USAF as the Minot Communication Site. It was closed again in 1997 and struck from the USAF property register and liquidated ca. 1998. Minot AFS has been sold to civilian interests, and has been reused as a housing subdivision colloquially known as the Radar Base. The station after standing derelict for decades has now been torn down.

Buildings on the station include:[2] 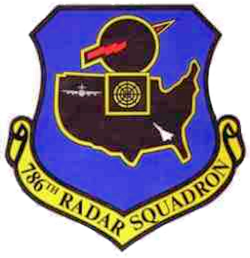 Emblem of the 786th Radar Squadron On a medium blue shield edged black, a black silhouetted map of the United States, bordered white, surmounted in the chief area of the shield by a black silhouetted radome edged white; an arrow piercing the radome, a radar scope on lower part of radome and two silhouetted aircraft in northwest and southeast corners respectively of the map, all white, details black. The emblem is symbolic of the Aircraft Control and Warning Mission in that electronic detection is indicated by the lightning bolt through the radome; surveillance and control is represented by the radar scope and aircraft and the map of the United States represents the Squadron's constant vigilance in safe-guarding our nation. emblem approved for use: 16 November 1956.