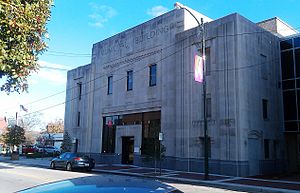 Wilson is a city in and the county seat of Wilson County, North Carolina, United States.[3] Situated in the heart of eastern North Carolina, around 40 miles east of the capital city of Raleigh, it lies at the interchange of Interstate 95 and U.S. Route 264 in the state's Coastal Plain region. Wilson had a population of 49,610 in 2012, according to the Census Bureau.[4]

Wilson is now ranked 18th in size among North Carolina’s 500-plus municipalities. The city has added more than 40 percent in population since 1990, primarily due to a construction of new subdivisions and an influx of new residents. This has attracted new retail and shopping construction, primarily in the northwestern parts of the city. Wilson is a diverse community with African-Americans making up 48% of the population and White 43%; the remaining 9% includes many nationalities, including Latinos, Vietnamese, Chinese and other groups. The U.S. Census Bureau estimates that nearly 5,000 county residents (7.5 percent) were foreign-born. Of those, nearly 3,000 people, or 62 percent, had entered the U.S. since 2000.[4]

Once widely known as "The World’s Greatest Tobacco Market", Wilson enjoys a diverse economy today, with a healthy mix of agriculture, manufacturing, commercial, and service businesses.

Wilson is located at the intersection of Interstate 95 and US 264; approximately 45 minutes east of Raleigh, the state capital. It also is at the northern terminus of Interstate 795, which provides a route to Interstate 40 and the port city of Wilmington, North Carolina.

The history of the city of Wilson dates back to a community that formed around Toisnot Primitive Baptist Church, built in the early 1800s. The community was originally called Toisnot. In 1836, the Wilmington and Raleigh Railroad Co. began building a Wilmington-to-Weldon line. The railline reached the community in 1839, and by 1840 Toisnot had both north-and-south service. That led to the growth of the community.

Wilson currently operates under a City Council-City Manager form of government. The City Council includes seven members who are elected by districts and a mayor who is elected at large. All terms are four years. The City Council makes policy and budget decisions, which are enacted by the city manager, whom they appoint, and the staff.

C. Bruce Rose is the longest-serving mayor, having served continuously since 1992. Prior to that, he was a city firefighter for 30 years and fire chief for seven years.[7]

The city has built its own Government-access television (GATV) municipal cable TV provider known as Greenlight which provides cable TV, digital phone and internet to its residents.[11] Greenlight was formed in 2008 to provide an independent, locally owned and operated option for television, telephone and Internet broadband connectivity for Wilson residents. Since then, Greenlight has grown to provide its services to more than 6,000 residential customers and businesses and the Wilson County School System. In addition, Greenlight provides free wireless Internet access throughout the downtown Wilson area. Wilson was the first city in North Carolina to offer gigabit Internet connectivity service to its residents in 2013. That service allows Internet users to upload or download data at speeds up to one billion bits per second.[12]

Wilson is served by two airports: Wilson Industrial Airport and Rocky Mount-Wilson Airport (RWI), and by the Wilson Amtrak Station.

The city has a bus system.

Wilson is the birthplace of Branch Banking and Trust Corporation (BB&T), which is among the nation's top financial-holding companies with $182 billion in assets, as of spring 2014.[13] Although headquartered now in Winston-Salem, N.C., BB&T remains among Wilson County’s top employers with around 2,000 people working in various financial services.

Bridgestone Americas operates a plant in Wilson that employs more than 1,800 people who make radial tires for cars and light trucks. Bridgestone recently completed a 6-year, $250 million renovation of the plant, which was retooled to make run-flat passenger car tires that are sold in both the USA and Japan. It recently marked 1 million man-hours without a losttime accident.[14]

According to the City's 2011 Comprehensive Annual Financial Report,[15] the top employers in the city are:

Wilson is home to the Wilson Tobs of the Coastal Plain League, a collegiate summer baseball league. The Tobs play at Fleming Stadium in Wilson. The Tobs began play for the league's inaugural 1997 season.

Wilson's chief source of news is the Wilson Times, established in 1896.

Youth Enrichment Program of Wilson, Inc. operates Sallie B. Howard School for the Arts and Education.